A Woman in Her Thirties and the Heroes We All Need

Have you guys seen The Great British Baking Show? If not, it's on Netflix. And you're going to need to watch it.

Let me be clear about a few things before I start talking about this important piece of television. The first is that I don't have time for television. Neither do you, I'm guessing. We are back to school, the newest members of the swim and hockey teams, oh, and did I mention work and all the other millions of things we have going on? Every single day is a race to the finish, and every morning we wake up and start a new race all over again. 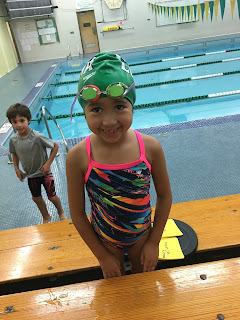 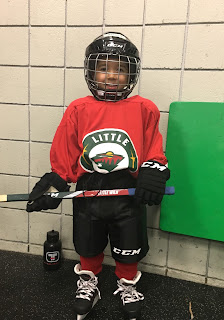 Who has time to watch TV? WHO?

After a particularly taxing day recently, I decided that instead of 'winding down' with a scroll through the news and reading about how things are... well... very... you know... I decided I would give The Great British Baking Show a try.

This is the show the world needs right now. Here's why:

Everyone is kind.
I completely realize I sound like a Pollyanna hippie when I say this, but I simply don't understand why people are so friggin mean to each other. Maybe the mean parts of The Great British Baking Show are edited out; maybe Mary really is a horrible human being who is secretly making fun of each contestant on the show, but I doubt it. The Great British Baking Show is a competition, and yet everyone, even the people in competition with each other, still finds a way to get along and not call each other horrible names.  See, people? It's possible.

There is no unnecessary drama.
We need to talk about how news nowadays has been sensationalized to to soap-opera proportions. Don't get me wrong-- I love a good drama, and I love getting all the feelz. But a Kardashian announcing a pregnancy is not 'Breaking News'. In fact, it's not important in the least. Maybe we should also apply that philosophy to some other famous people, too. The Great British Baking Show doesn't have ridiculously dramatic music; the hosts don't pit people against each other and try to get them to talk sh*t. It's strictly a fact-based presentation of how each competitor has performed. How refreshing!

There is civil discussion of complicated issues.
I'm a woman in her (very) late thirties now, so I know a few things. One thing I know for sure is that very few issues have black and white solutions. Let's take Mary's Cherry Cake, which was part of the competition in the first or second show: 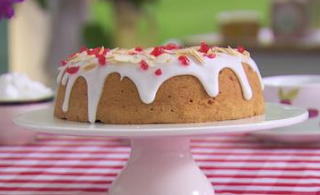 Each contestant had to recreate this masterpiece, using the same ingredients and minimal directions. Each came up with varying versions, each with their own problems and successes. It took a lot of discussion of technique and evaluations of the final product to come up with the winner, and even that one had its flaws. If Mary's Cherry Cake requires this much bi-partisan discussion, I think it's safe to say that a zinger on Twitter is not going to solve the problem of, oh I don't know, immigration reform.

Active listening.
Though every contestant on The Great British Baking Show is an expert baker and the judges are legitimately famous for their craft, I have yet to see anyone on that show plug their ears, say their way is the only way, and not be willing to listen to other people's ideas and concerns. Here's an example of what happens on this show: 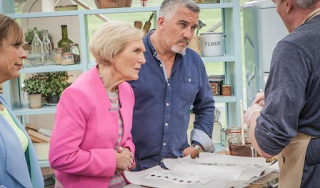 Notice how they are looking at the person talking and listening to what they are saying. They might think this guy is totally out of his mind doing what he's doing, but they are still giving him the decency of listening to him and letting him speak. And when they have questions, they ask them of the person. They don't gossip or roll their eyes or make assumptions. They just ask questions when they have them, and get the answer from the person who can give the answer. I mean, what a concept!


There is a conscious moving forward.
Of course, The Great British Baking Show is a competition. People are eliminated each show, and while that is a necessary sadness, there is also support and hope for this person's future. No gloom and doom, no screams of the apocalypse. This is, in fact, the system. Concessions need to be made for the greater good. And at the end of the day, if the person eliminated is someone the judges or the audience truly believes in as a baker, we have the choice to support them in other ways. You picking up what I'm putting down, here? A person doesn't need to win The Great British Baking Show to make a positive impact in this world. And we, the audience, can choose to support that person in their loss and elevate their... baking... in other, maybe even more impactful ways.

This is, you know, life. We can move forward with hope. We really, really can.
Posted by L. Shanna at 7:19 AM