A Woman in Her Thirties Turns Four 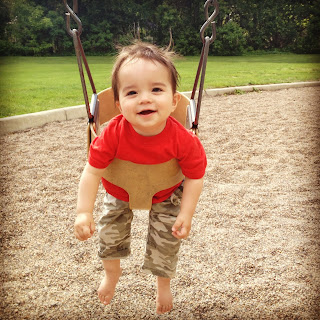 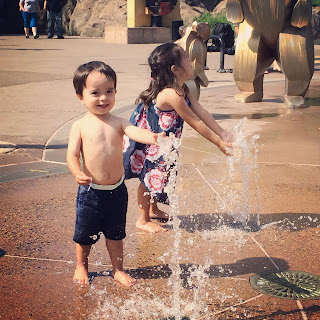 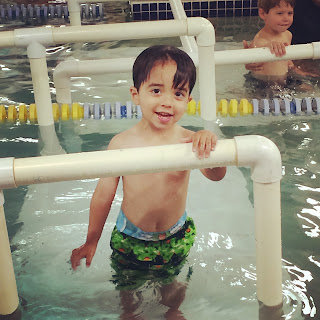 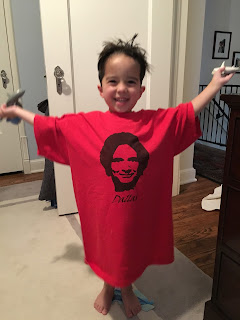 (Yes, he is wearing a Larry Dallas from Three's Company shirt. That's a story for another time.)

Let's start this year's birthday letter with sharks. Your love of them, most specifically. In case you're reading this far into the future and you have forgotten what I'm talking about, let this picture remind you: 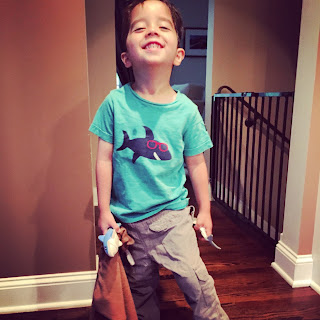 See that blue shark? He's your everything. People have asked me many times why you love that plastic shark so much, and I have no answer. All I can say is that over a year ago you found that as part of a water toy set that has long since been discontinued, and you haven't let it go since. No, I don't have a backup. That's it. The one and only Sharky.

Sharky has, of course, lead to an intense love of aquatic life. I bought at year pass to the aquarium at Mega, and if we ever want to make you happy we simply take you there. 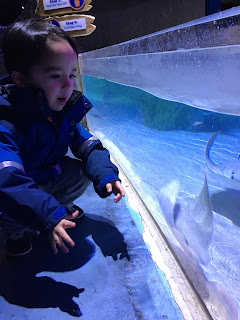 Because you are my second child, you are doomed to suffer the eternal fate of being compared to your sister. I'm sorry about that, but the sooner you just accept that as a fact of life, the better. You are the Yin to your sister's Yang, and that makes me so happy. Where she struggles to take risks, you encourage her. Where you struggle to sit still and pay attention, she is there. But while many people have been quick to characterize you as 'all boy' (ugh, how I hate that term...), I see the sides of you that aren't so easily defined. You are a risk taker in many ways, but cautious in others. You are often not interested in pleasing other people until you are, and your sensitive and caring nature shines through.

What I'm saying is, as your mother, I see how multi-faceted you are. And I love every piece of what makes you the smart, kind, and adventuresome little person you are. 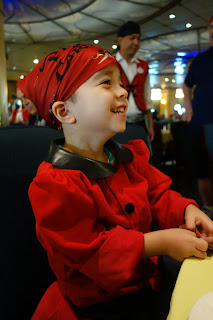 I'm going to skip the sentimentality in this post, though I have to tell you, it's hard. Anna's birthday is different-- we joke about my long labor, my struggles breastfeeding, my lack of sleep. But with you, your birthday is a time of serious reflection. You are a reminder every day of how fortunate we are to be together; the precariousness of life. 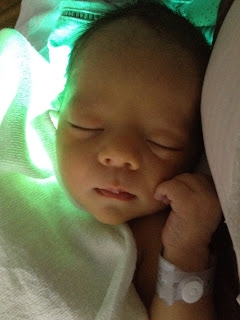 Some people hit the lottery, some people get lucky by ways of talent or riches or opportunity. But you, Mister, have been the luckiest, most wonderful thing to have happened to me, and to our family. Our lives are better because of all you are, and all you represent.

A Woman in Her Thirties Gets Back Up

I failed at something recently. A colossal, huge, gigantic, soul-crushing fail. If failing were the Olympics, this particular fail would have earned me a gold medal.

Since it's graduation time, all these big wigs from all over the country are giving commencement speeches about success. And one of the themes I noticed (maybe because I sensed that this particular fail was about to happen), was the idea of failing well.  To be successful also means being able to take the blows, the let-downs, and learn from them. Not just brush it off as bad luck, bad business, bad people. Really, really learn from the mistake, and grow.

When you are not in the midst of a bad fail, this is easy advice to take. Here is Anna in her 'cap' and gown as she graduated pre-school last week: 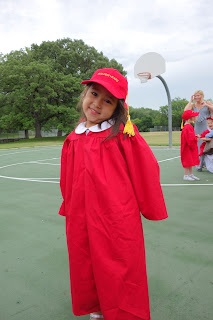 She's feeling pretty good about life, and rightfully so. I could have taken her aside at this moment and told her that life is full of ups and downs and she should prepare for setbacks. And her response (like anyone else who might be riding a pretty great wave) would be something like, 'yeah, sure. Now where's my graduation cake?'

But when you're in it, watching the walls crumble around you, it's hard to remember that setbacks are just a part of life. They feel like the definition of life, of you, of your worth.*

Here is what I've learned from this particular fail. Read not while you're in a cap and gown looking at all the wonderful opportunities in the world, but rather while you're eating a pint of ice cream and kicking yourself after you've blown it.

1. Admit where you went wrong

I posted about this a long time ago, the lost art of apology. For some reason we live in a society now where apologies = accepting full blame, and therefore should be avoided. In my particular case, I felt pretty 'right' about some of the decisions I'd made. But there were places I admit I went wrong. So I apologized for those things, even though it sucked, but not for the whole thing, because that wouldn't be fair to me.

A woman in her thirties has quite an intuition. It's something that should be celebrated, not ignored. I sensed I was making some mistakes during this particular failing. Now I know I should have paid closer attention to those worries.

There's an old adage about talking to trees. Something about how if you talk long enough, they will tell you the answers. I didn't technically talk to the trees, but since I am a terrible sleeper during times of stress, I took a whole lot of walks. It was during those times that I realized that yes, I had failed, and I had to embrace the road before me as including that failure. 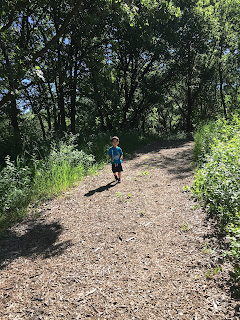 Aaron is a fabulous walking partner.

4. Realize you aren't responsible for other people's happiness

I am soooooo glad I made this New Year's resolution in January. I have come back to it a million times over the last week or so. I am not-- NOT-- responsible for other people's happiness. It's a fool's errand to try. So part of embracing failure is to admit that some bridges may be burned along the way. It's a bummer. But it's also okay.

I'm being intentionally vague in this post (sorry), but instead of eating ice cream I'm using what I've always used in times of stress- writing. It's through this type reflection that I'm able to really recognize what I've learned, and fail well. As well as I can, anyway. So maybe the trick to failing well means failing consciously? Maybe. I should ask a woman in her forties what she thinks.