A Woman in her Thirties Gets Political

Several months ago, a good friend named Heather told me she was interested in running for the Minnesota House of Representatives. This news wasn't terribly surprising to me-- she has always been very involved in politics, very opinionated, and very connected in the community. I was thrilled for her, but also thrilled for myself-- I'd never known a real, actual politician, and I think a woman in her thirties is supposed to know at least one.

The details are long and tedious, but I'll sum up thusly: Heather and I have always been aligned politically (we are Democrats). She is also a wonderful person and great friend, and after a few rounds of helping her edit some website material and other literature, she asked me to be her campaign chair.

I think my actual response was, 'You know I don't know what the hell I'm doing, right?'

And her response was something like, 'Yeah, we'll figure it out together.'

Our first major hurdle to overcome was the caucus in March. California is not a caucus state, so this was the first time I'd participated in such a thing. IT WAS WILD. Heather was running against a person who's held the seat for 1000 years (slight exaggeration), and another newcomer. Our point that day, other than voting for POTUS, was to become a delegate in the district convention in April, where the Democratic Party would formally endorse a candidate (hopefully Heather) to run against the Republican candidate.

Here I am the night of the caucus: 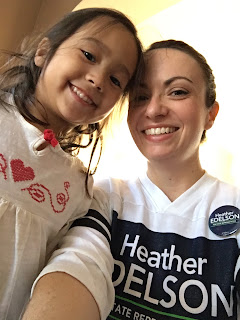 To this day, Anna thinks Auntie Heather was running for President of the United States. I stopped correcting her because I like that idea.

In theory, on the night of the caucus we would go in, cast our vote for President, then sit in a room with our other Democrat neighbors, and listen to some resolutions people wanted on a ballot at the convention. When the chair asked, 'Who wants to be a delegate at the convention?', some people would raise their hands, get chosen, and go home to watch American Idol.

But politics is tricky. Heather knew that in order for her to do well at the convention, she'd need as many delegates on her side as possible at that convention. So the night of the caucus, we had LOTS of people who wanted to be delegates, from all the candidates. Long story short, we sub caucused, argued, and were there for several hours before the delegates (including myself) were chosen.

It seemed like Heather did great at the caucus, but we live in a huge district, and it was hard to tell just how many delegates Heather would have voting for her at the convention. So the time between the caucus and the convention she spent door knocking, networking, mixing, mingling, and getting herself out there. I helped a little, but really it was all Heather.

(As part of my 'help' to her, I was on the Rules Committee for the convention. These are the people who make the rules for how the convention is run. This is a post in and of itself. What a crazy learning experience for me. Talk about 'government by the people'! It was really fascinating.)

So the day of the convention was last Saturday. I was on pins and needles for Heather, but also for myself because I was nervous for her. Truth be told, there was a part of me that was scared she would get the nomination. If there is anything I've learned in the last few months it's this: politics really are a yucky business at times. And when you have a dear friend involved in it, you want to protect her from the yuck. 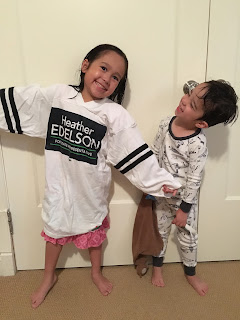 The convention, in theory, can last a couple hours. Some resolutions, a couple votes, and the Democratic endorsement is set. But last Saturday was truly a wild ride. After a couple votes, one of the candidates (with the least votes) dropped out of the race and didn't endorse a candidate. So it was Heather versus the incumbent. We voted at least four more times... maybe more. I lost count because it was so crazy. They were neck-and-neck (last count she was down by FOUR votes!).  By 4:00 there was no way either of them was going to get the 60% needed for the endorsement.

So Heather had two options: she could go to a primary, which would divide the party and prolong the process, or she could concede to the incumbent. 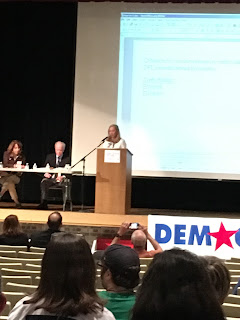 When people have asked me about Heather in the last few months, I have described her as someone whose heart is pure gold. She's a firecracker, wicked smart, and very generous. Of course she wasn't going to do what might be best for her-- she did what was best for the party. This was her during her concession speech. I can't explain the amount of energy in the room at this moment. We were all emotional and so proud of her.

A few weeks ago, Heather and I were talking about this process and how much we'd learned. She likened it to us going to college together, and that was so true. Because of this process I understand what's happening on the news better. I understand my party better and feel more aligned to it. And I truly understand the amount of time and energy it takes to run for political office. It's not for the faint of heart.

And the craziest part: I loved being a part of this for Heather. No, I don't have what it takes to run. But I do have talents that lend themselves to being a part of politics, just like every other red-blooded American (WE ARE SO FORTUNATE TO LIVE IN THIS COUNTRY!). I'll always be grateful to Heather for allowing me to be a part of this first run with her. And as far as the next run goes.... well, let's just say I'm 100% sure that I'm going to have that friend in politics after all.