A Woman in her Thirties has a Weight Problem

Last week I took Aaron for his three year check up.  As I already blubbered about in his birthday letter, Aaron is awesome in every category, if you ask me. 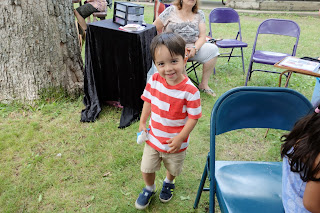 The doctor agreed, except in one.  His weight.

A few things before I begin.  One, Aaron is a peanut.  Always has been.  When he came home from the hospital he wasn't even ON the chart in terms of percentiles, and in the last three years has hovered in the single digits, at least weight-wise. 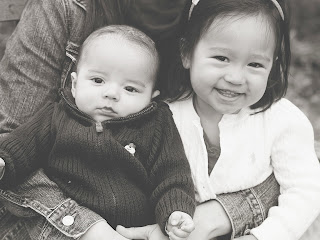 And two, food has ALWAYS been a struggle in parenting for me.  From breastfeeding agony to pickiness to downright refusal to eat certain foods, neither of my children have been good eaters (though Anna has made significant improvements-- she's eaten salmon the last two nights!).

I consider myself above average in the mothering department, but the food issue is a major sore spot. It feels like a constant battle, even though I know that seeing it that way is only perpetuating the issue.  I seethe with jealousy when I see other kids eating whatever their parents put in front of them. In the last couple of months, L and I have gotten more serious about the 'they'll eat when they're hungry' philosophy, and that worked a bit, if only to tone down my own neurosis about constantly being worried my kids weren't eating enough.

But then, last week, the doctor told me that Aaron hasn't gained a single pound in six months.  And when he's already so little, this is concerning. 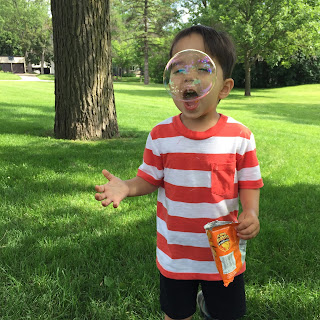 I think most moms would take this information and say, 'Oh.  Okay.  More calories.  Thanks, doc!'  But for me, it was a punch in the gut.  I big, fat one (pun intended), that brought tears to my eyes.  My child is too skinny.  Not, 'oh, isn't it cute how skinny he is?' but 'um, getting him more calories needs to be your focus.  We want to re-check him in four months and make sure he's gaining.' Ouch.

Feeding my children should be among the most primal, basic needs I provide for them.  I felt like giant mom-failure.

The doctor could see how upset I was, so she tried to make me feel better.  'Just give him more ice cream!' she said, trying to make light of it.  But that only made it worse for me. 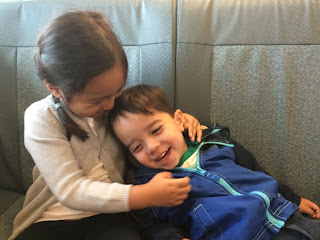 In fact, every high-calorie suggestion she gave me just made me more frustrated.  He doesn't like butter; he doesn't like a lot of cheese.  I'd love to put some more calories in his smoothies, BUT HE DOESN'T LIKE THOSE EITHER. He likes yogurt, cereal, and Z-bars.  He likes apple sauce and Veggie Straws, but only when he's in the mood. He's not a junk food junkie in the least.

He just is far more interested in playing than he is eating. 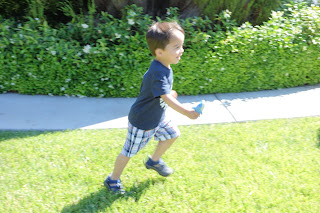 Did I cry about it?  Maybe.  But a woman in her thirties doesn't let her emotions obstruct her better judgement, so after a good hour or so of feeling sorry for myself I set a course of action.  Here it is:

1.  Get a second opinion
The doctor we saw isn't our regular pediatrician who knows Aaron, his history, and us.  (Let's face it, people, L and I aren't destined to have big babies.)  If SHE is concerned, then I'll get more concerned.

2. Smother things with peanut butter
Thankfully, Aaron loves peanut butter.  So for the past few days he's been getting big, sticky spoons full of it, whenever he wants. Same goes with whole milk, granola, and pretty much anything else he'll take.  Eat, child, eat!

3.  Chill out
I'm working on this.  Sure, he's skinny, but he's hardly emaciated.  He's also got enough energy for ten toddlers.  Something is working.  So chill out, mama, and let him eat in front of the TV once in awhile because reasons.  On the wide spectrum of things to bother myself with, this should probably not be top priority.  Everything is going to be fine. 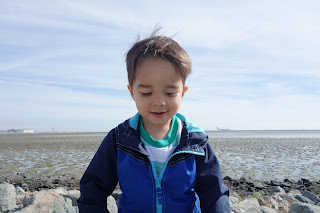