A Woman in her Thirties Makes the Best of It

Over the last few weeks, when I have told people that L had to travel for work over the Thanksgiving holiday, I got a whole slew of different responses.  Everything from, 'What kind of a jerk travels for work over Thanksgiving?' to 'We never spend holidays together. Welcome to my world.'  It was interesting, too, how I responded to all of these people.  Everything from 'Yeah, this is the last time THIS is ever going to happen', to 'It's not that big of a deal, not really'.

My response changed based on the person, by the situation. I changed my perception based on the perception of others. This is NOT how a woman in her thirties is supposed to behave.  Had I learned nothing on this journey in my thirties? 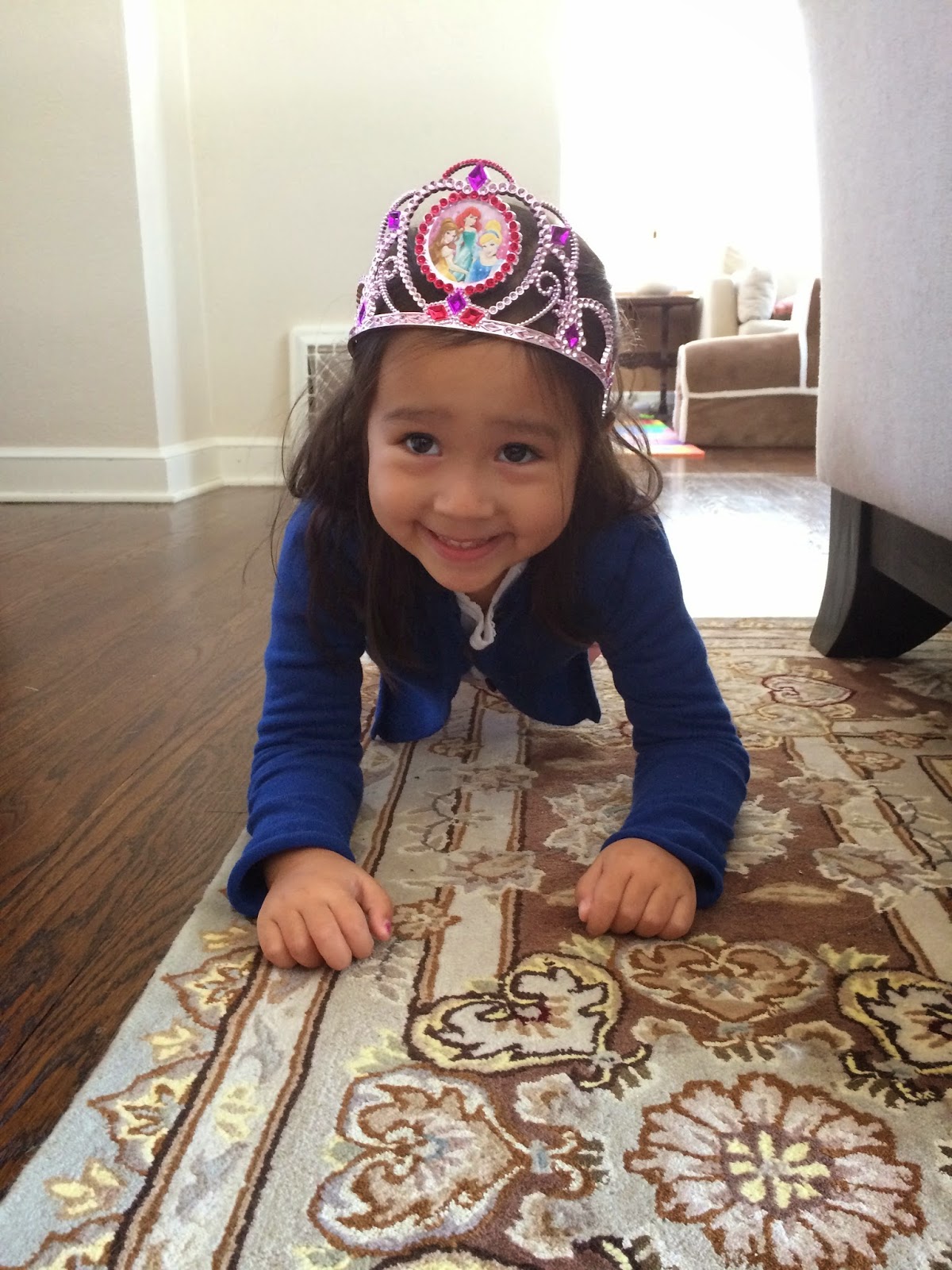 I thought and thought about this as we approached the holiday, and kept coming back to a conversation I had with my wonderful neighbor some time ago.  She and her husband have two grown children, and are living the dream.  Because her husband is a retired pilot, they travel anywhere, anytime, for free.  They take great pride making their own alcoholic beverages.  They host Downton Abbey parties.  They are among the most giving and kind people I've ever known.  I mean, seriously.  THE DREAM.

Anyway, she told me awhile back that she-- like me-- was alone a lot in parenting.  There's no way around the suckage of that.  However, she reminded me, I have two choices in this situation.  I can get angry and resentful.  I can compare my life to the lives of the people around me and I can shine big giant spotlights on how much better their lives are than mine.  I can wallow in my own self-pity and take my children down into the pit with me.

I can make the best of it.  For my neighbors, it was about celebrating holidays on different days, when they could all be together.  And if that didn't work out for whatever reason, they would understand that such-and-such was just a day, and wouldn't define them or their family unit.  I can focus on all the blessings we have (COUNTLESS) and choose to be happy.

I'm not going to lie... we missed Daddy this year on Thanksgiving.  We set a place for him: 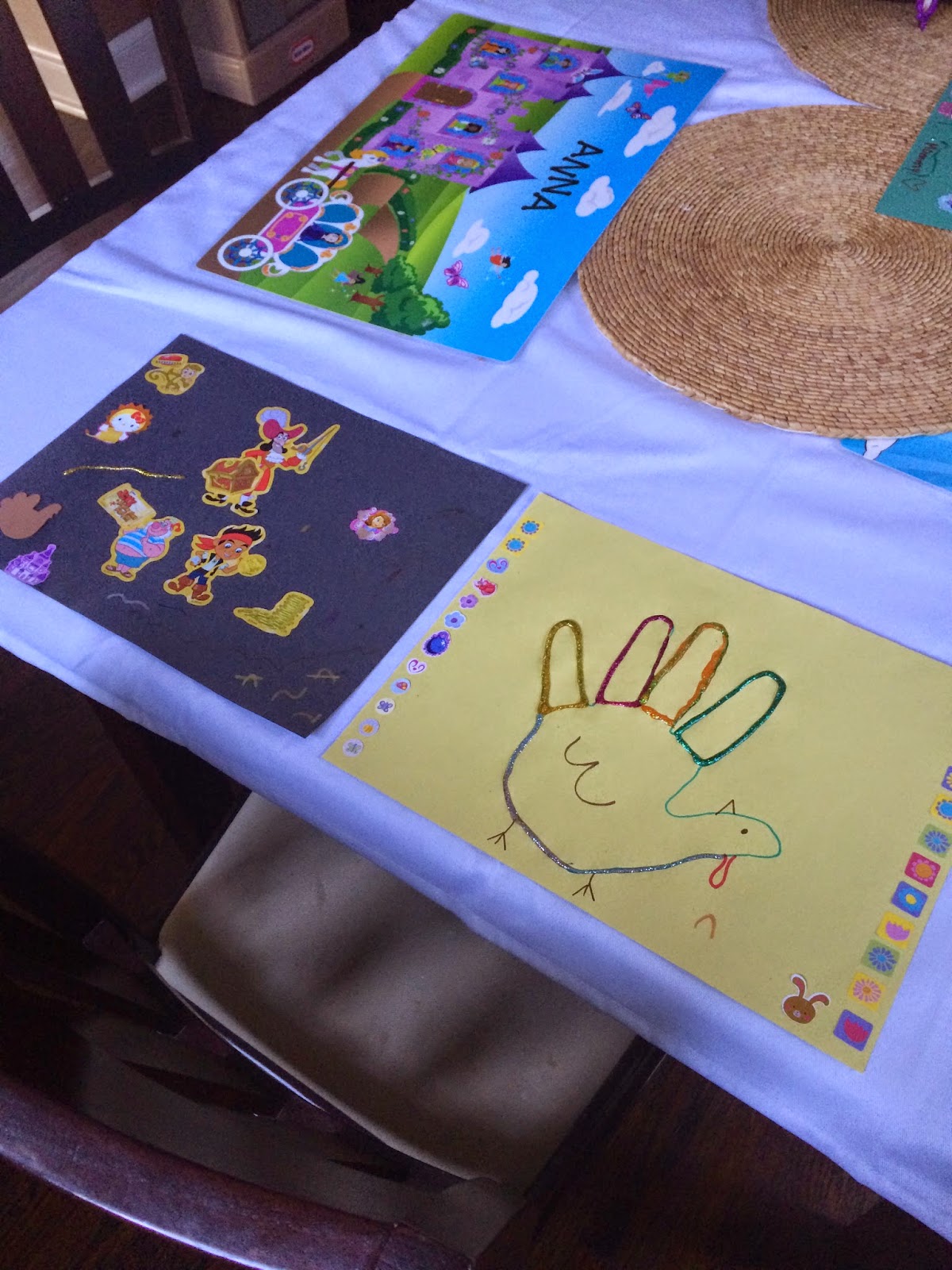 We called him lots, but tried not to make him feel too bad (it's not like traveling over the holiday is easy for the person traveling...)  We had a simple dinner with YeYe and NieNie and wrote what we were thankful for on the white tablecloth. 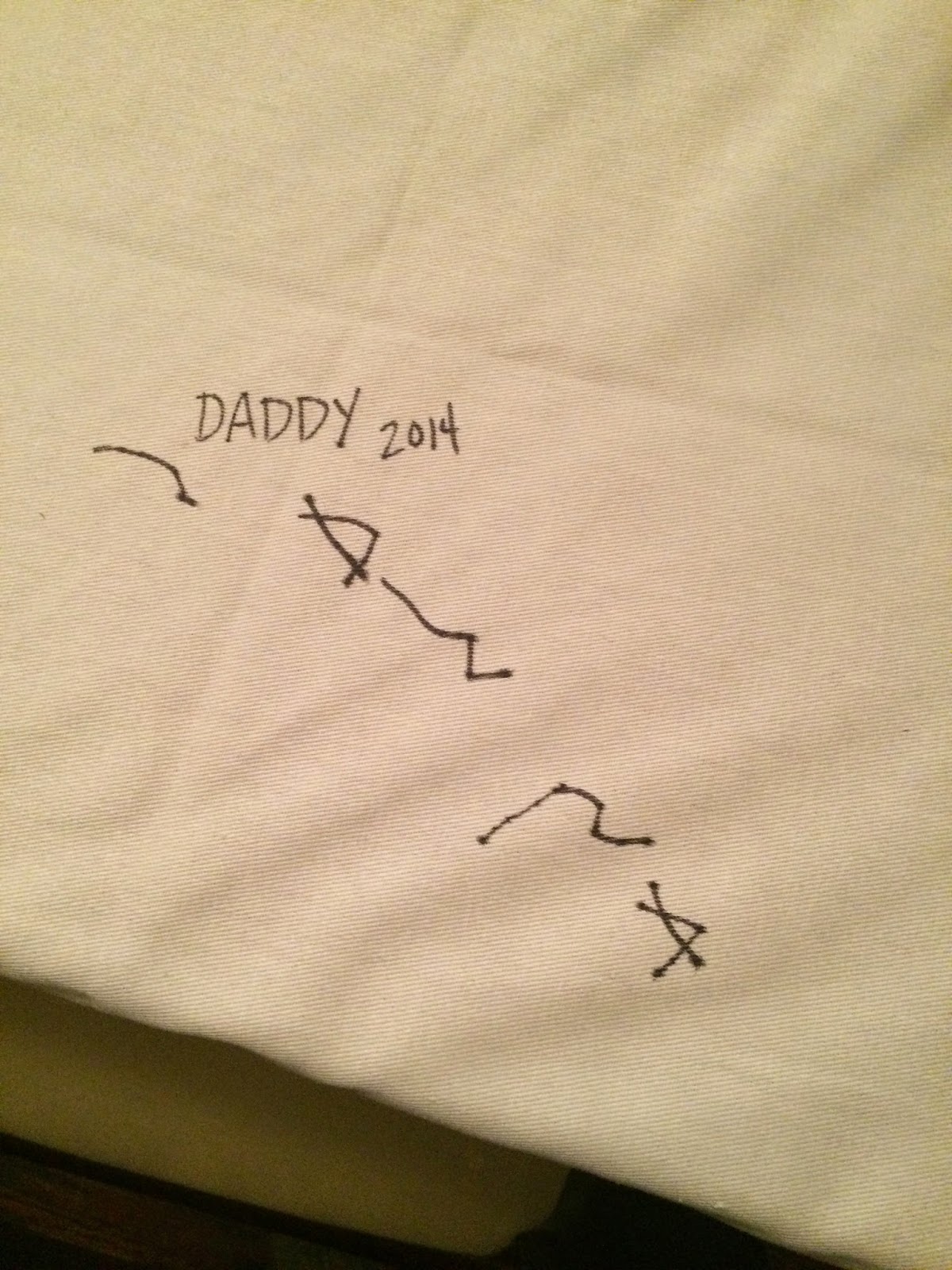 And when I asked Daddy what he wanted me to write on the tablecloth for him this year, this is what he said: 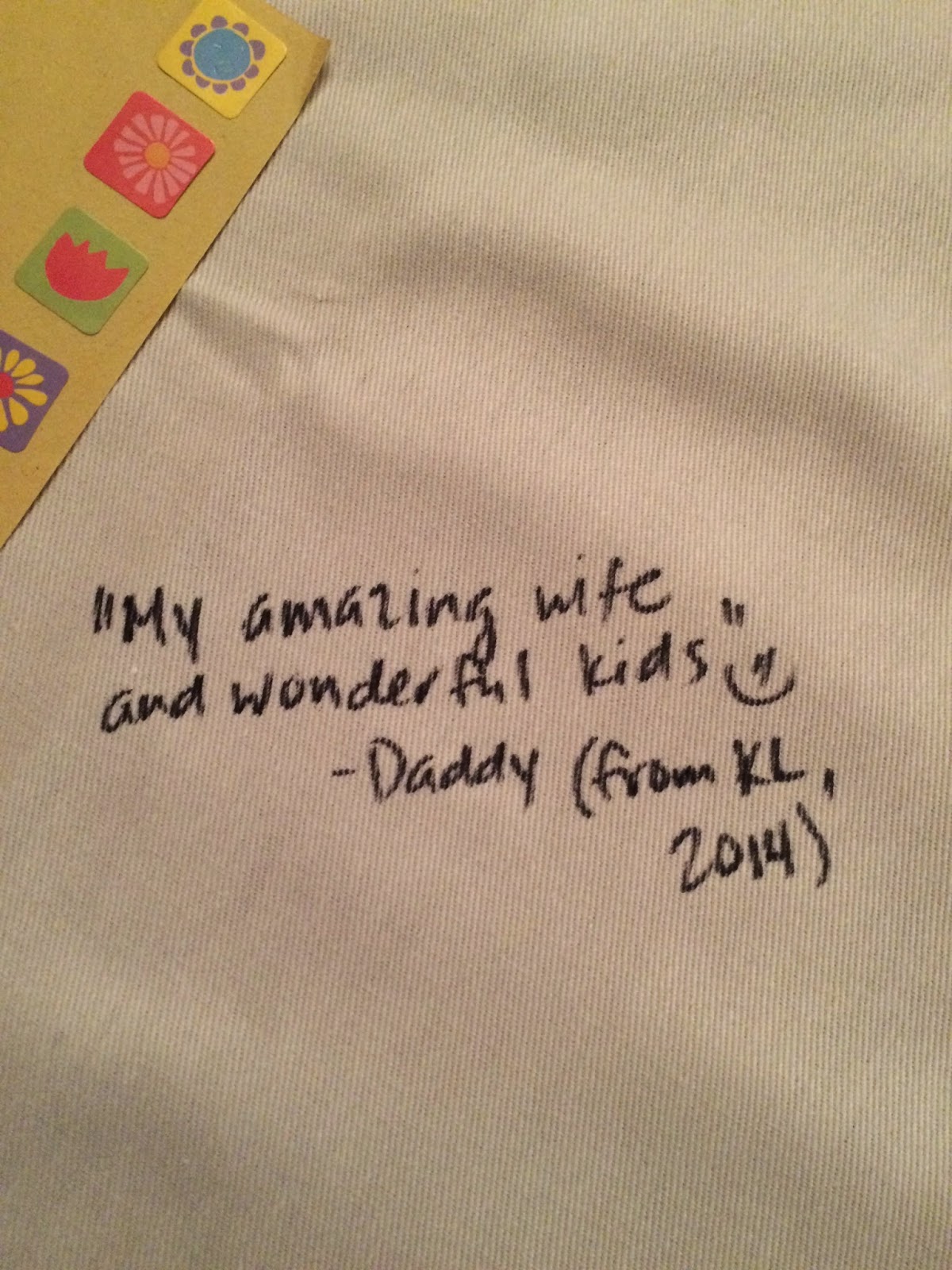 Honestly, when I wrote that, I realized exactly what my neighbor was talking about.  About making the best of things.  About how it affects everyone, when you're positive.  About how a day is just a day, but a family is defined by more.

Happy Thanksgiving from our silly, unconventional, wonderfully imperfect family to yours.

A Woman in Her Thirties, the Fourth

This week, you are four years old.

You're a good counter, so let's do some counting: 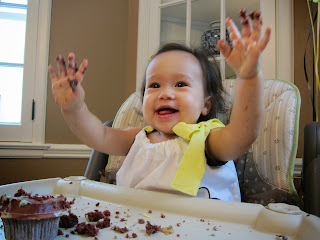 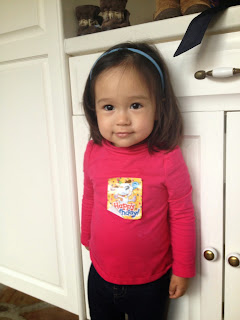 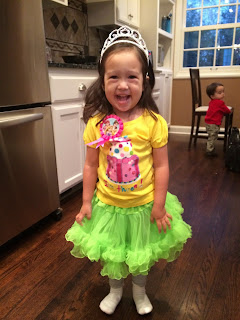 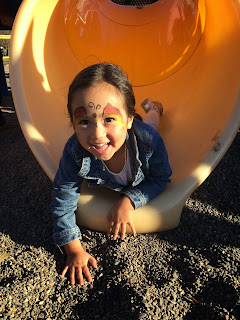 But back to you, and your four-ness.  The past 365 days have been all about figuring out how things work.  From 'Momma, why do the clouds move?' to 'Why do we vote?' to 'Why does Aaron's belly button look funny?'  (you were not referring to his belly button), you have thrown me each and every day with the daunting task of explaining the world.  When I was younger and imagined myself as a mom, my answers to these questions have been both articulate and informative.  Now, though, I bumble through a lot of, 'Uh, well... um... it's... complicated, Bubbie.' 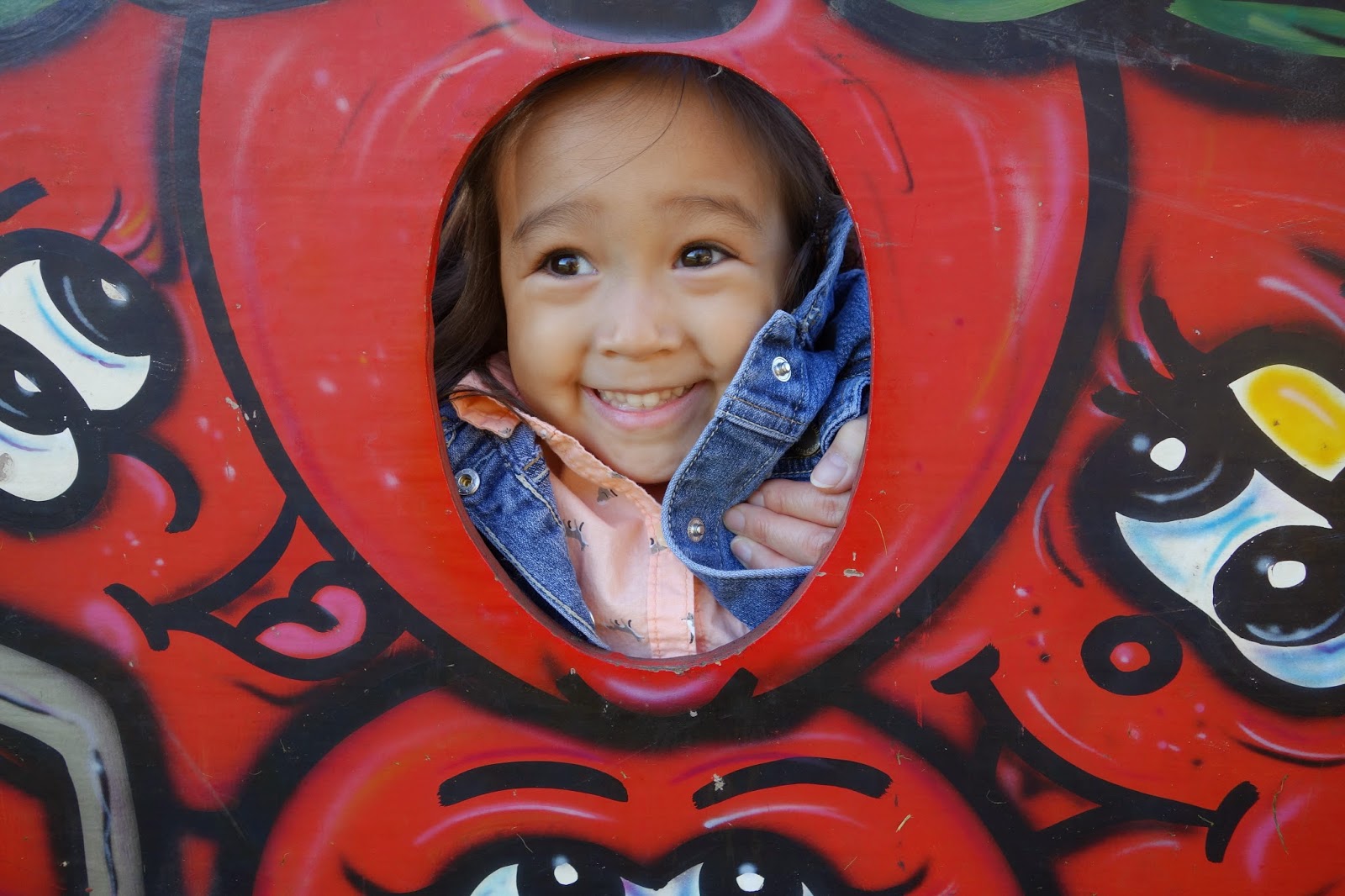 And it is, isn't it?  Life is so darn complicated, at least it is to this woman in her thirties.  But for you, well, I can see how this would not be an acceptable answer. 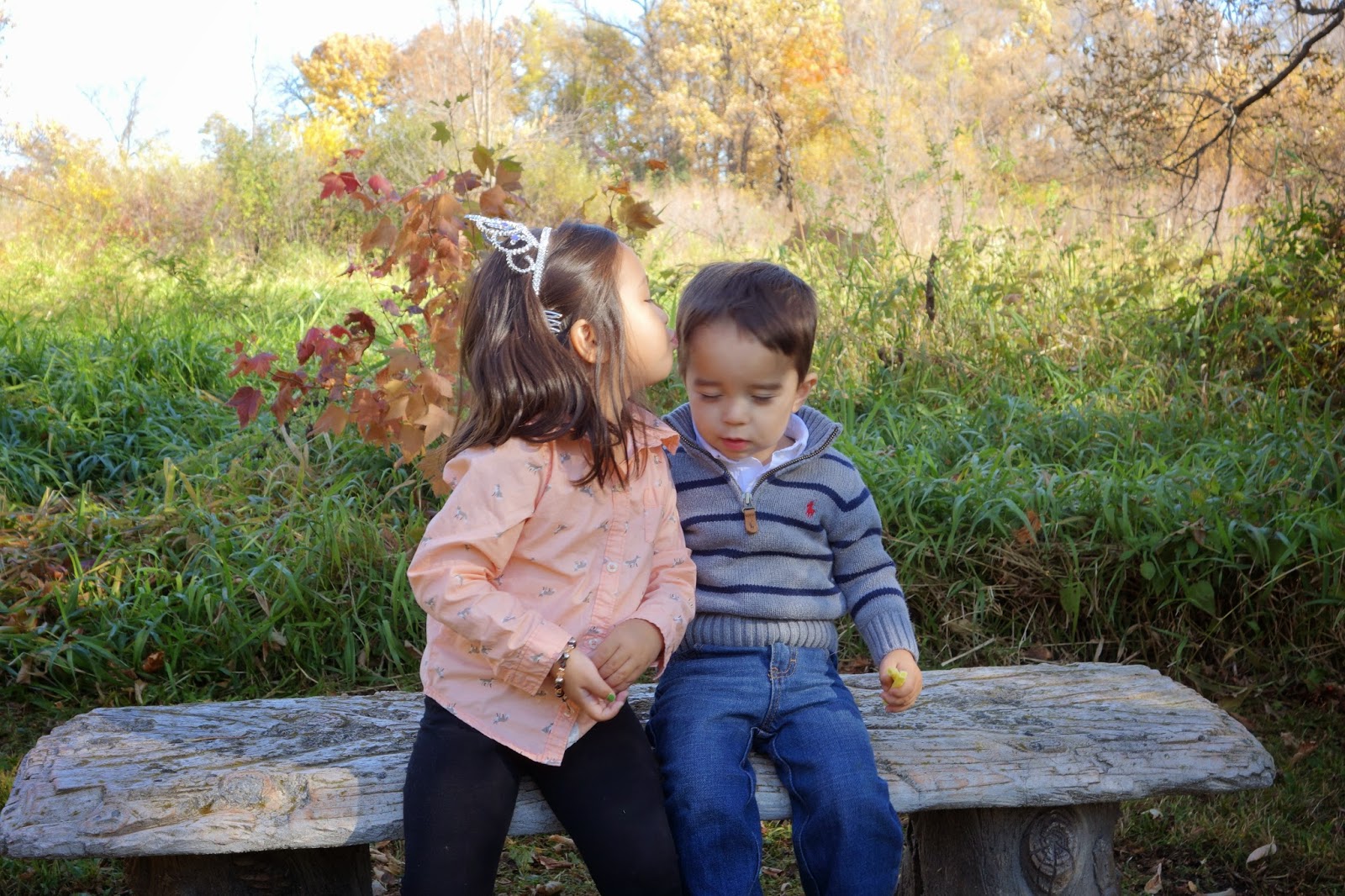 Daddy is traveling? 'Tell him to come home now, Momma.' 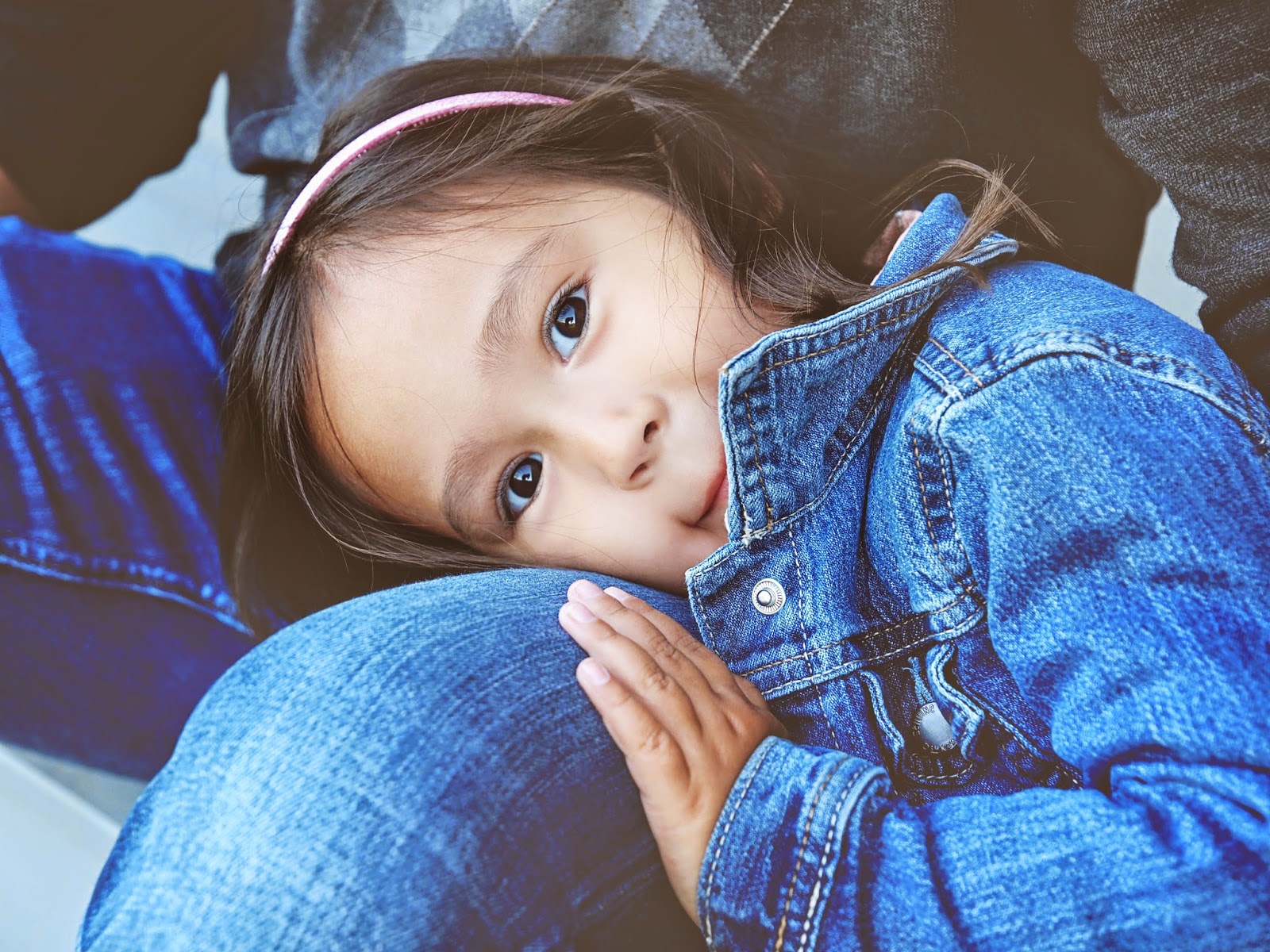 Momma misses her home, momma feels sick, momma is having a hard morning?  'Put on the happy song, Momma. (Eric Hutchinson is your current favorite.) If you sing with us, then you will feel happy.' 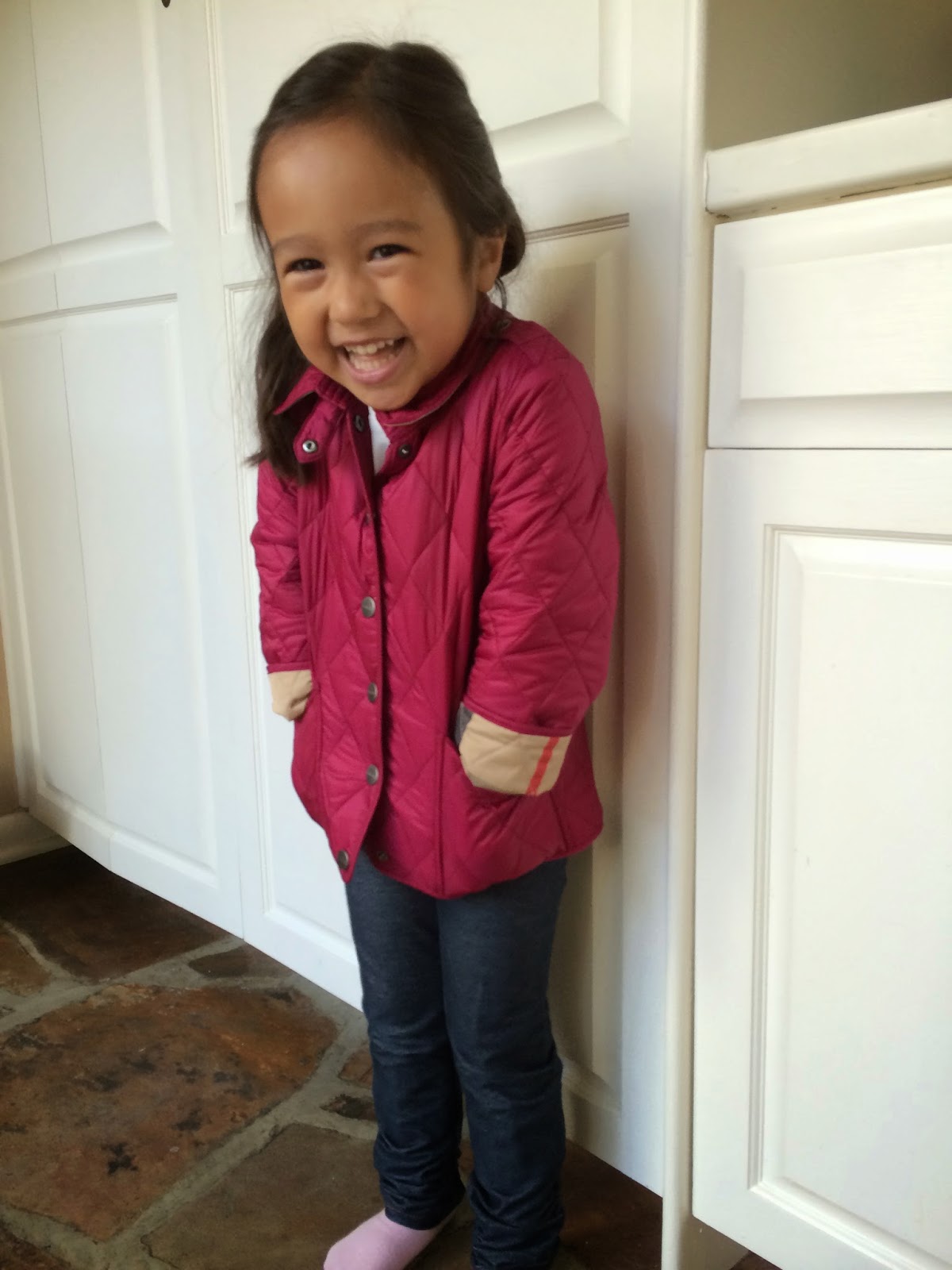 I could go on here about your accomplishments.  Piano lessons.  How each and every teacher you've had has raved about what a joy you are.  Your correct pronunciation of the word 'croissant'.  But someday, when I'm old and gray and looking back on the highlights of my life, I will think back to this beautiful, smiling face: 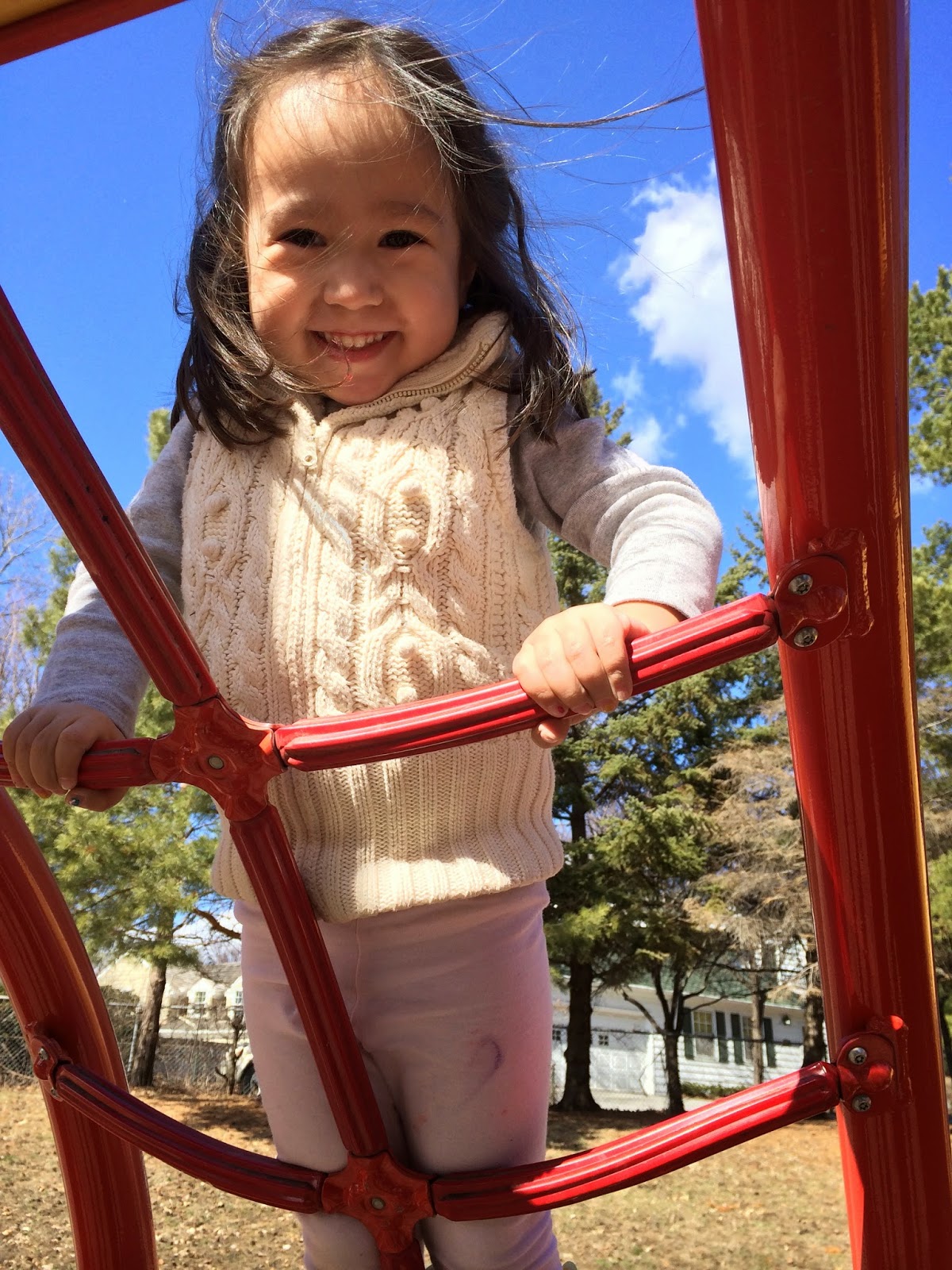 And those won't be the details that come to mind.  What I'll have with me is the memory that this was the year I saw that your inner beauty far surpassed what you look like on the outside.  I won't remember your score on your kindergarten screening test, but I'll remember how many people have described you as a loving and caring friend.  How you worried about the lonely boy at the zoo.  How you patiently taught your brother to play hide and seek.  How, when you saw me shedding a tear a few weeks back, you ran to me and said, 'You're the best momma in the world!"

So happy birthday to my sweet, caring, kind, smart, inquisitive, silly, thoughtful, and yes, beautiful baby girl.  Who you are fills me more more joy than I could ever communicate in words. I am so proud to be your mom.

A Woman in Her Thirties, The Hippie

I've been practicing yoga regularly for a little over four years now.  Notice how I said 'practicing' yoga. That's what the yogis say. They also say things like 'core lock' and 'ujjayi pranayama'.  And other hippie things.

This morning, in my weekly 75-minute sweat-fest, I started thinking about all the ways that yoga has changed my life.  And it made me cry.  You'd think this is an abnormal thing, to cry in the middle of a crazy-hard workout, but yogis do it often.  We're weepy, sentimental warriors, the lot of us.  Even the dudes.

So, since it's November (what?!) and it's time to get grateful, here are all the things yoga has taught me over the years.  And why you should 'practice', too. (Photos by Mimsydotes, obviously.)

When I first started practicing yoga in earnest, I was pregnant.   But yoga was never harder for me than after Aaron's birth, after seven months of strict no-exercise restrictions followed by an emergency C-Section.  My 'core-lock' was more like Jell-O pudding, and I simply could not engage my abdominal muscles in the same way anymore.  But now, I can rock boat pose like nobody's biz, because I worked really, really hard at it.  I used to be terribly inflexible, and now I'm a toe-touching, king pigeon-ing, Dancing Shiva.  Aka, badass. 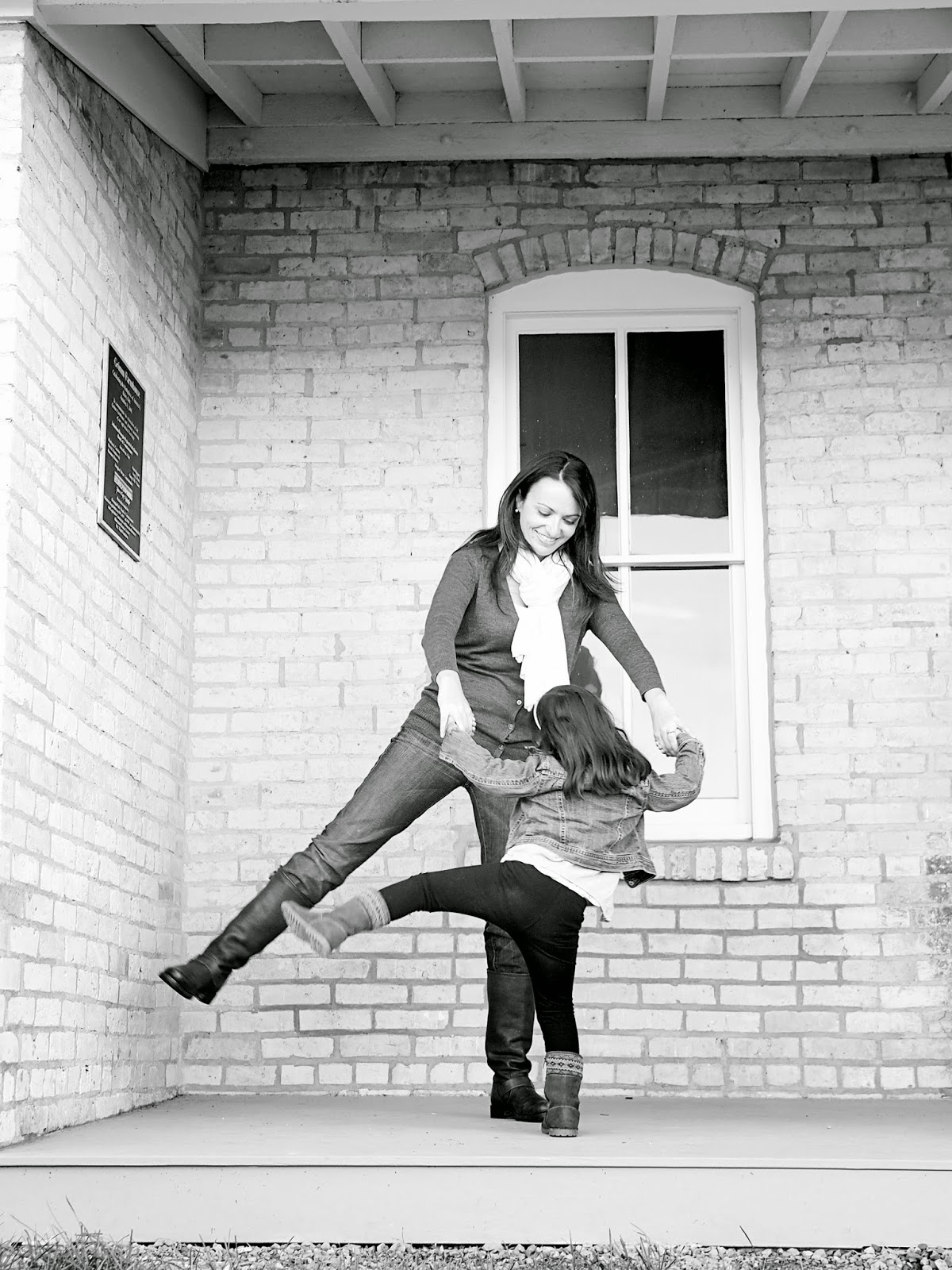 Yoga is all about the mental/physical balance, which I really didn't understand for a long time.  But you know how there are people who choose to be happy, so therefore they are happy?  And there are people who choose to be miserable, so they are?  It's like that.  If I go into yoga class and say, 'today I'm going to be Poopy McPooperpants and grunt my way through every posture while staring at the clock', then it's guaranteed to be a long workout.  But if I go in and say, 'I'm a goddess and there's never been a more goddessy-goddess than me,' then that's pretty much how it goes.  And also, in life. 3.  If I don't practice at least once a week, I'm a terrible person

After practicing so long, I don't understand how every woman in her thirties doesn't take yoga.  Everything hurts if I don't go to yoga-- from my fingers to my knees to my back to my shoulders-- EVERYTHING.  When I hurt, I am grumpy.  When I'm grumpy, I'm mean.  And now that I'm a mom, when I'm grumpy and mean then my kids are learning to be grumpy and mean, too.  So yeah, yoga. 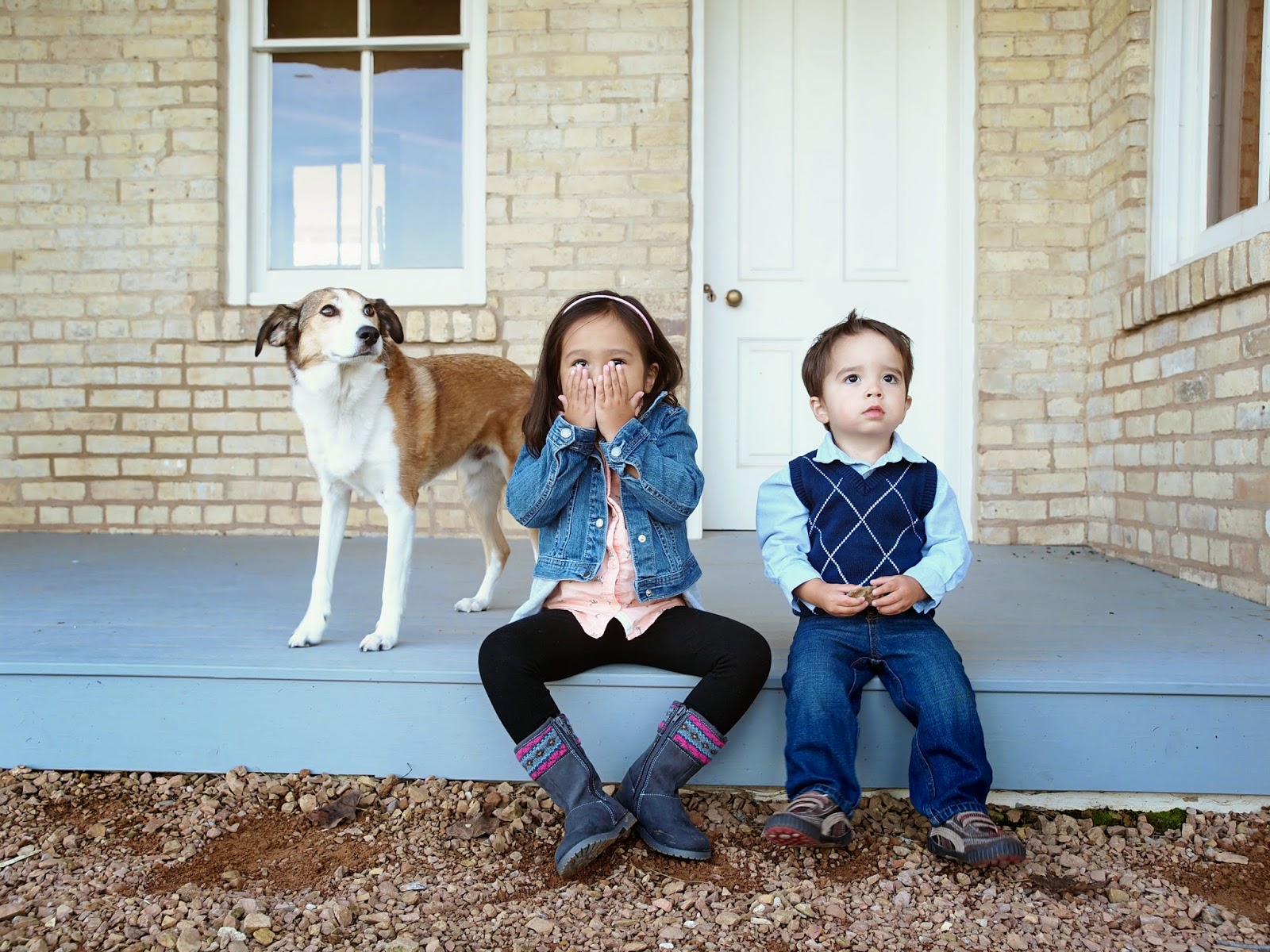 This morning, while holding dolphin pose for an ungodly amount of time, I went to a dark place in my head. It was the night of June 21, 2012, the night Aaron was born.  I don't know why I thought of it, but I remembered that I'd called my mom from the ambulance.  'I love you,' I said to her.  'Pray for me.' Because I really thought I was saying goodbye. 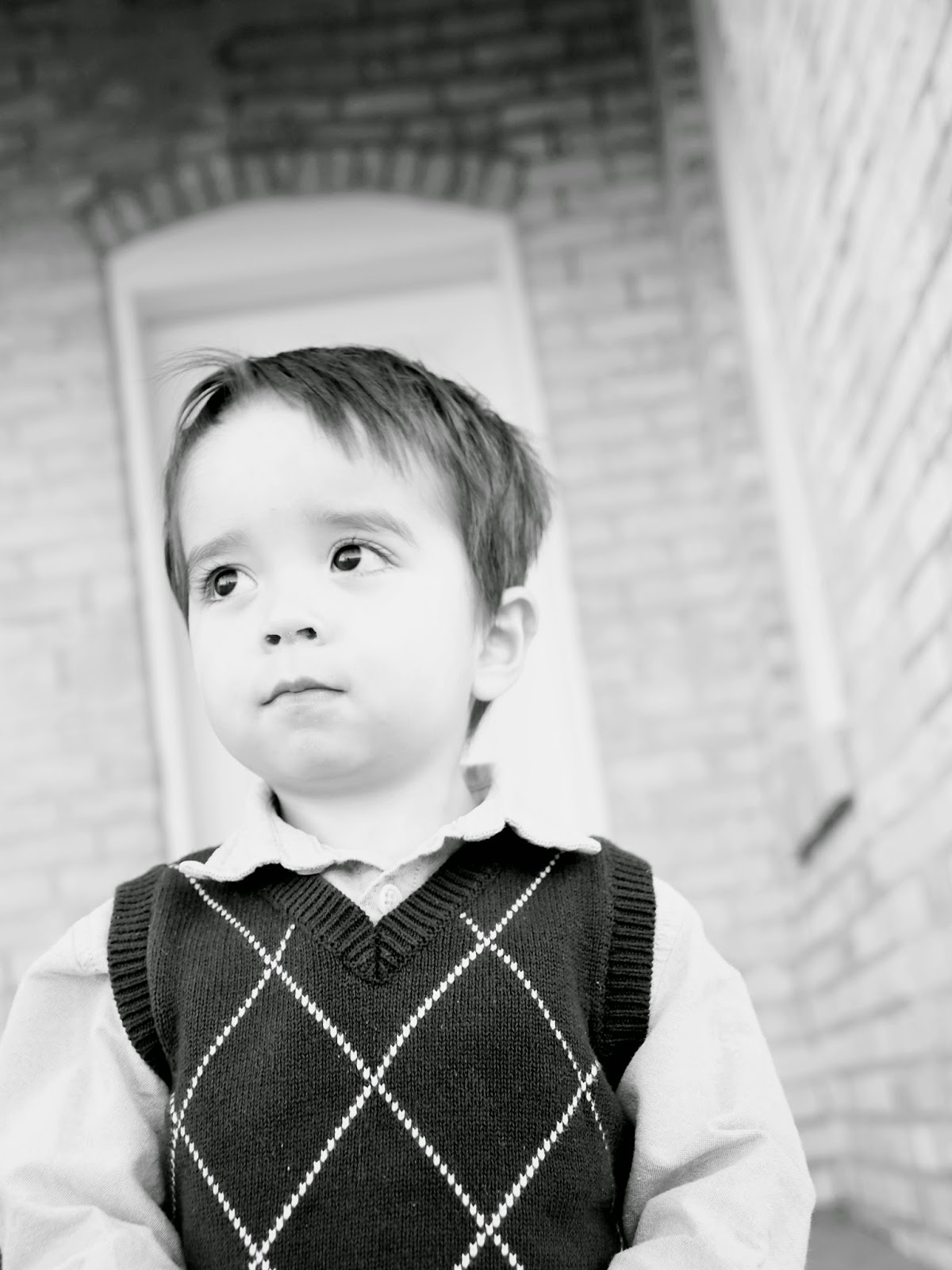 See why the tears?

But it occurred to me that by practicing yoga I have been giving thanks for that evening, that all turned out well.  I'm healthy, Aaron is healthy, we're all so flippin' lucky to be on this planet at this moment, and life is so unbelievably beautiful.  Even when it's really hard.  But then again, isn't it the hard that makes us appreciate the beauty?  I went on and on in my head about this, my good fortune and all the blessings I have, that I didn't even notice that the teacher had said we could release the pose.  I've never gotten that from kickboxing, people.

So there you have it.  A woman in her thirties is a certified yoga hippie.  Namaste, people.  And all that stuff.
Posted by L. Shanna at 12:49 PM 3 comments: