My to-do list for today is huge.  Huge!  But I can't get to a single thing on it because I got a little blindsided this morning by this video, which a former student posted to my Facebook wall:

The short story is that the year I came back from China I was asked to be video taped teaching, so the video could be shown to teachers in training in California.  This sounds much, MUCH more exciting than it actually is.  I wasn't necessarily chosen because I am some sort of teaching god, more because I was a willing participant and didn't care if credential students nit-picked my work.

The people in charge promised to send me the video so I'd have it for my portfolio, and they never did.  I asked several times since moving for the video, all with no results. I'd pretty much forgotten about it, until this student posted it on my wall because a friend of his had to watch it in his teacher credentialing class.

So I watched it this morning, while the monkeys ate breakfast. 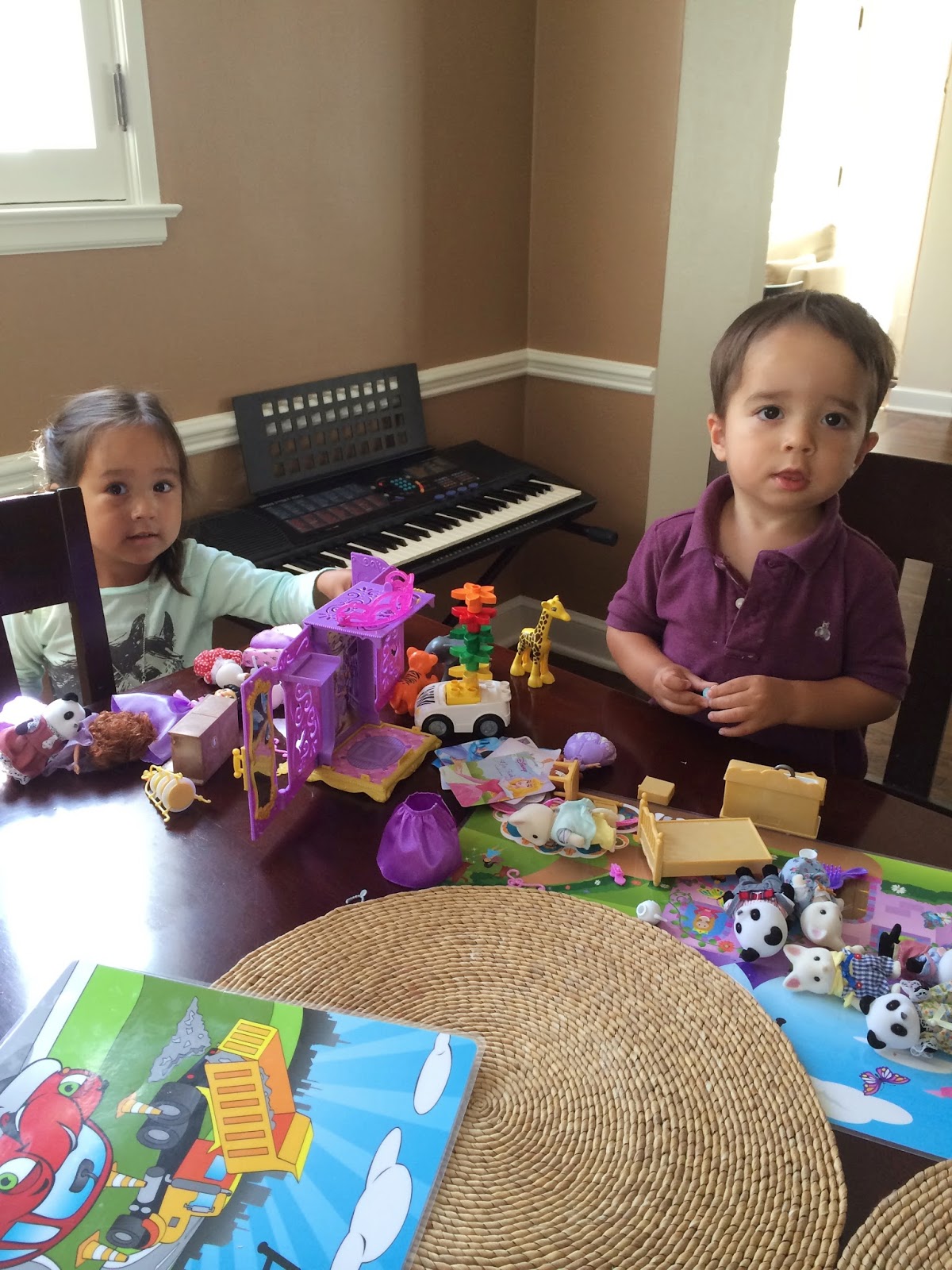 (Not eating breakfast, sorry.  This was a couple weeks ago.)

And I cried and cried.  Big, fat, ugly tears. For so many things.  How much I miss the classroom (I do, I do!), how much I miss these kids in particular (they were AWESOME), the state of my hair (wha?!). But mostly for the woman in that video who is so, so young to me, not because she's all that much younger but because she doesn't know Anna and Aaron yet, she doesn't know that in less than a year she will call Minnesota home, she thinks she knows blessings and happiness but she doesn't.  She really doesn't.

But here's the real story, people.  All of that is good, all those wonderful teacher emotions you can't put a price tag on, all the pride I got from my career... seeing the video was a reminder of who I was (still am), and all that teacher-y stuff is great, so great.

However, if you look at that video closely, you'll notice something.  Stooped posture because... pooched-out belly that I thought my shirt hid pretty well... tired, tired eyes.  I was pregnant in that video, or at least I thought I was, despite all the doctors who kept looking at me with serious eyes and saying things like, 'Hmm.  Let's check again in a week.  Be hopeful.'  This video was taken during a yucky, yucky time, and this woman in her thirties has a serious talent for blocking out yucky times.

Seeing it and going back to that moment this morning was like a punch in the gut. Memories, before and after, so many tears, so much secrecy... am I the only one who senses a tug in my voice?  A strain? I have almost no pictures of that time, and for good reason.  But now I have video, plain as can be.  That is me, teacher.  It is also me, woman.  Aching for so many reasons.

Still, I am beyond grateful that this video has surfaced.  That group of kids was-- I'm not kidding-- a saving grace for me.  Despite the bad memories, there are so many good ones.  That classroom was inspiration for The Take Back of Lincoln Junior High.  I made great friends teaching at that school, many of whom I'm still in contact with.  It was during that time that L showed me the man and father he was capable of being, and here we are.  Happy.  Blessed. 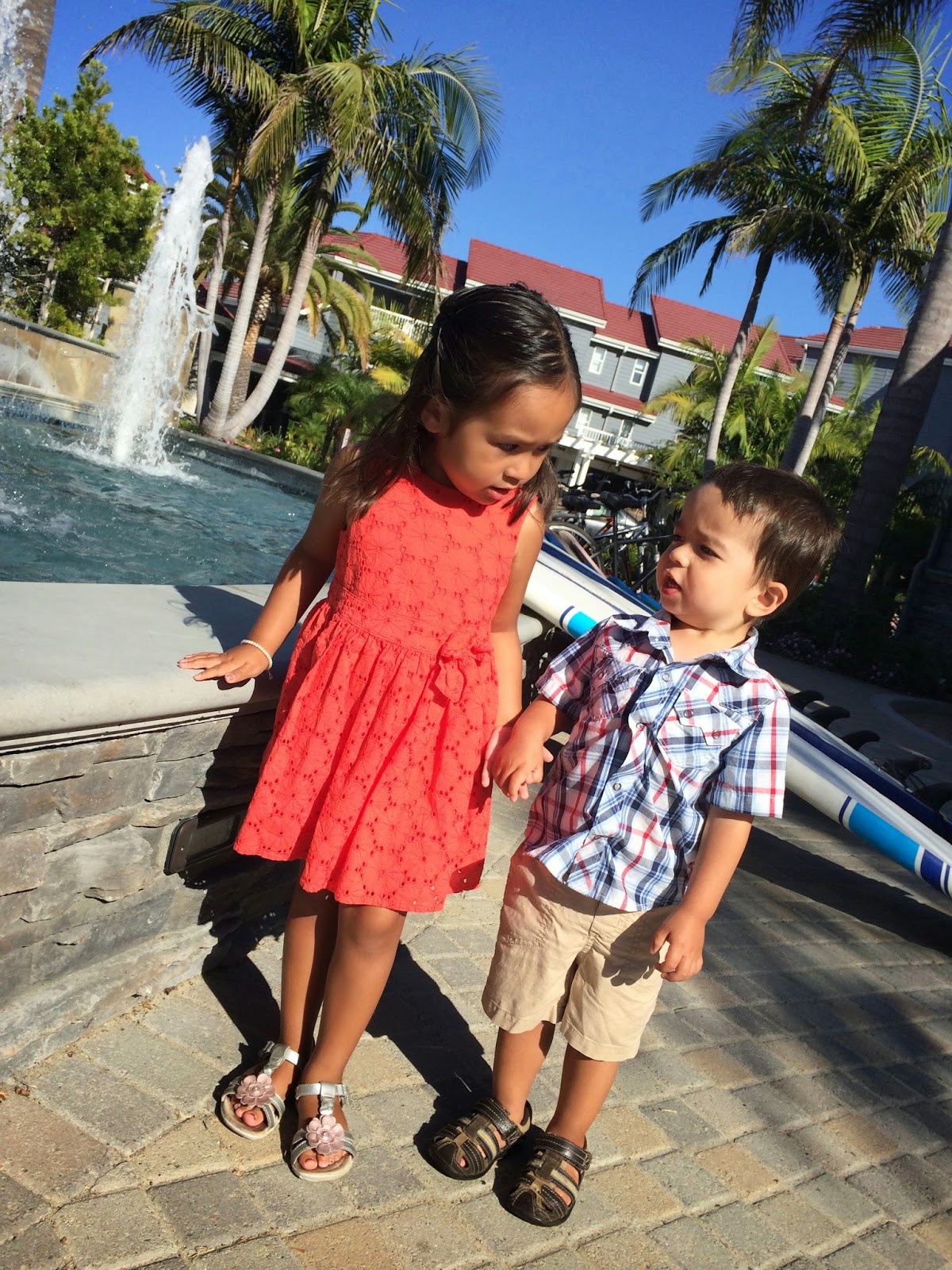 People often talk about the importance of letting go of the past, and I think that's mostly true.  Today, however, I'm glad that it's crept back upon me.  When given a chance, it's okay for a woman in her thirties to take a moment to acknowledge the past. All she's been through, all she's done.  Even all that might have been.
Posted by L. Shanna at 10:08 AM 3 comments:

A Woman in her Thirties has a Great- Really Great- Summer

Anna and Aaron had their school open house today, which can only mean one thing:  summer is almost over.  It is with a heavy heart that I write that sentence, because this summer has been the best in this woman in her thirties' recent memory.  Here's why: 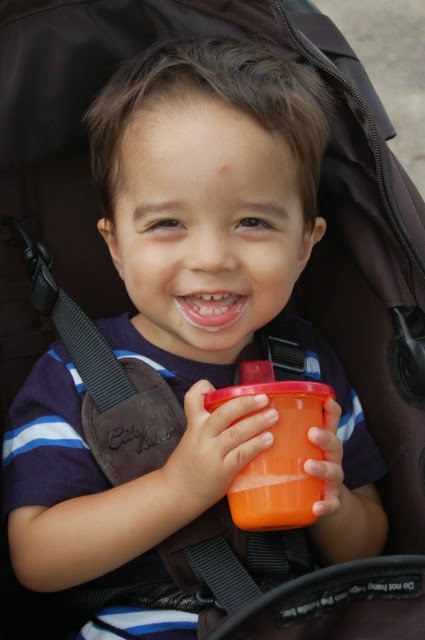 Let me tell you a little something about this sweet face.  Aaron turned two on June 21, and on that day he decided he was going to start sleeping like a normal human being.  That's right-- two solid years of sleep deprivation over here.  Sure, we had our occasional breaks (one lasted FOUR WHOLE DAYS!) but for the most part, this stink pot was up 2-3 times a night, and I was definitely going crazy.  That is not to mention this other stink pot: 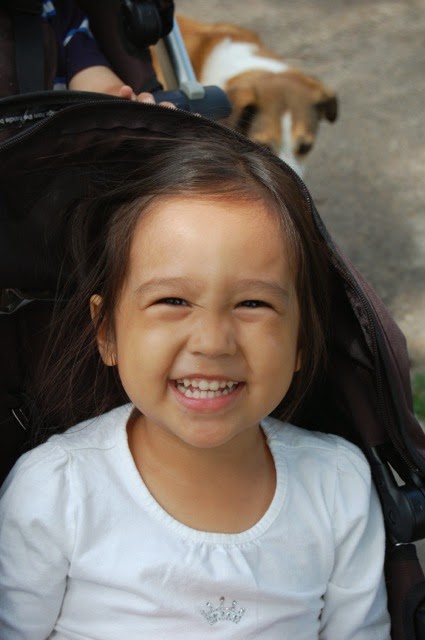 For whom nightmares have plagued us for the last year or so.  But this summer, by a miraculous act of God, we have slept.  And I haven't taken a single night of it for granted.

If you can call hanging out with super fun and motivated kids and helping them write creatively "work".  Teaching this summer was a joy on a million levels, and I loved every minute of it. I blogged about it here. 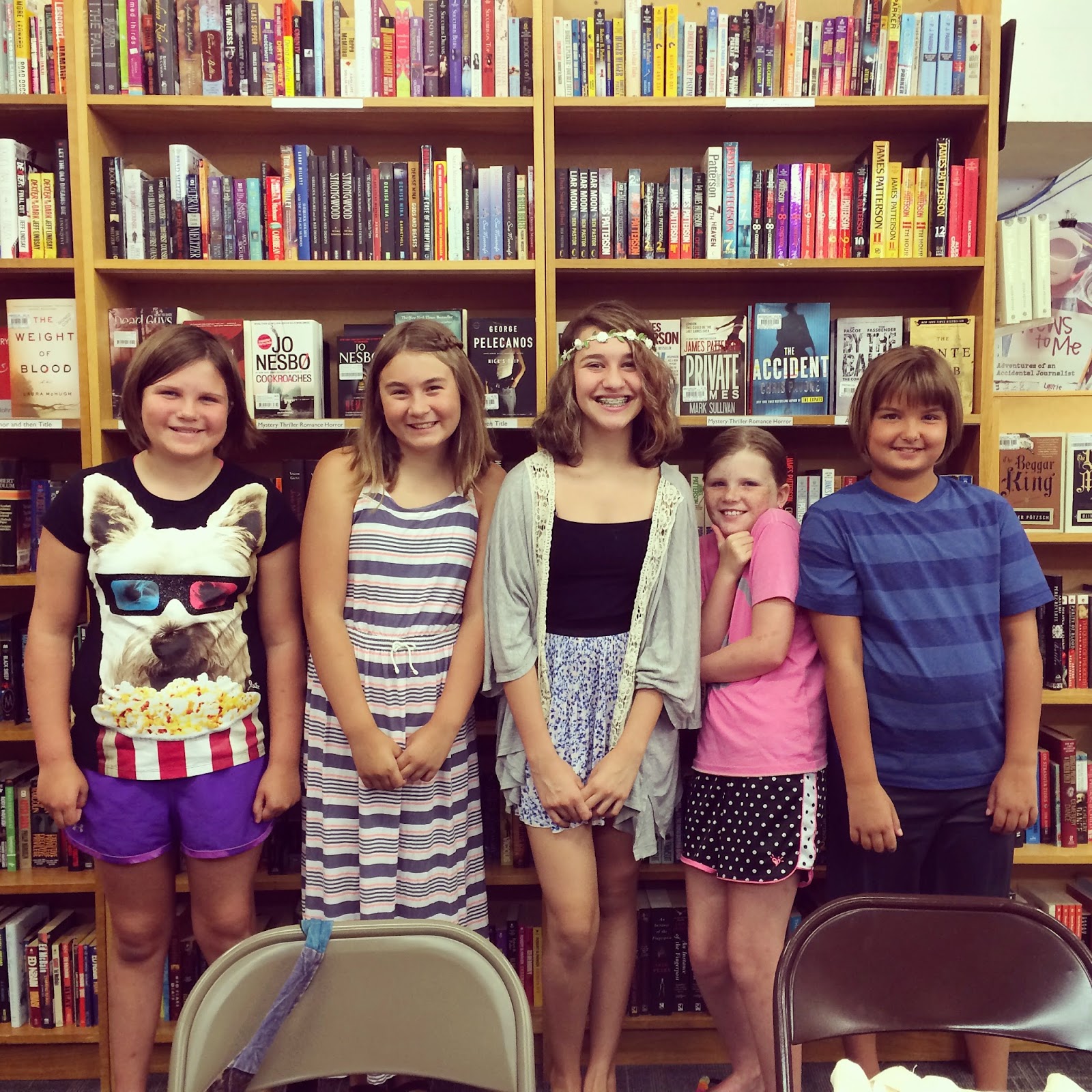 In the last three years of at-home momhood, I've felt fairly chained to the house for naps, meals, and various other anxiety-ridden baby activities.  Not this summer.  Here are some of my favorite outings: 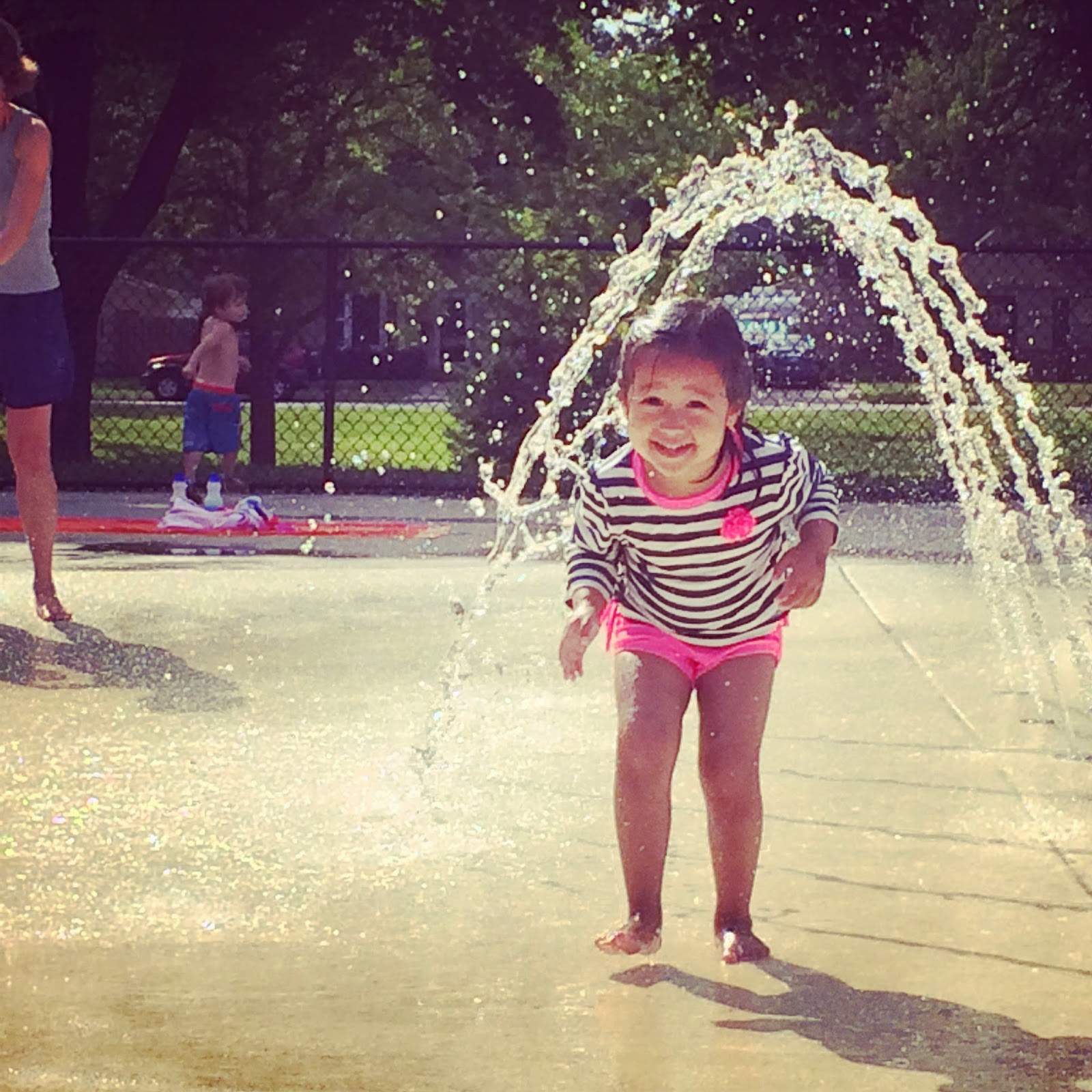 The splash pad.  Whoever thought of this concept is a genius. 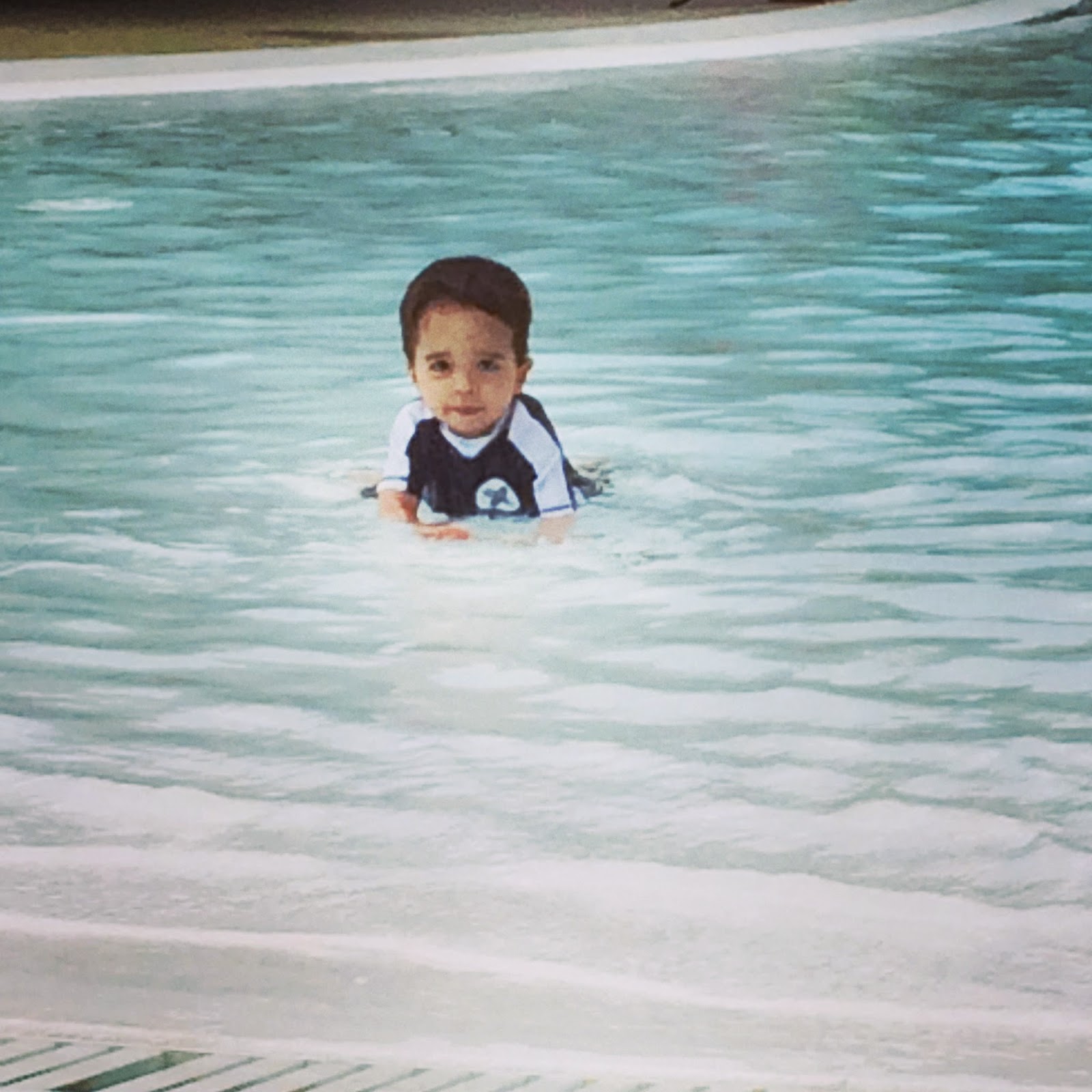 The community pool.  This was the first year I've been able to go and actually enjoy myself.  Not in a relax-with-a-book kind of way, but in a my-kids-are-so-much-more-independant kind of way. 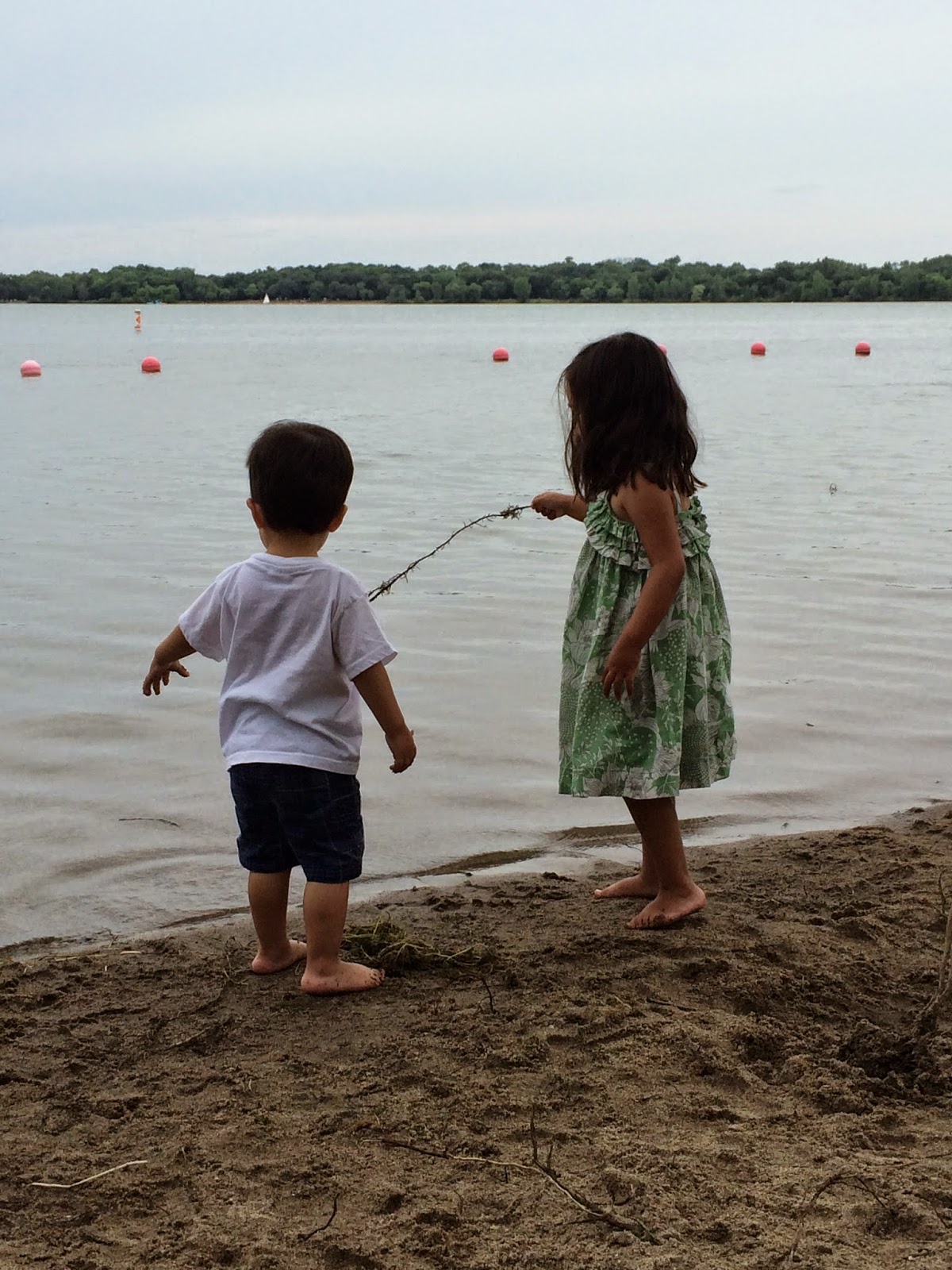 Lake Harriet.  Aaron's favorite summer activity is throwing rocks into bodies of water.  He's quite talented at it. 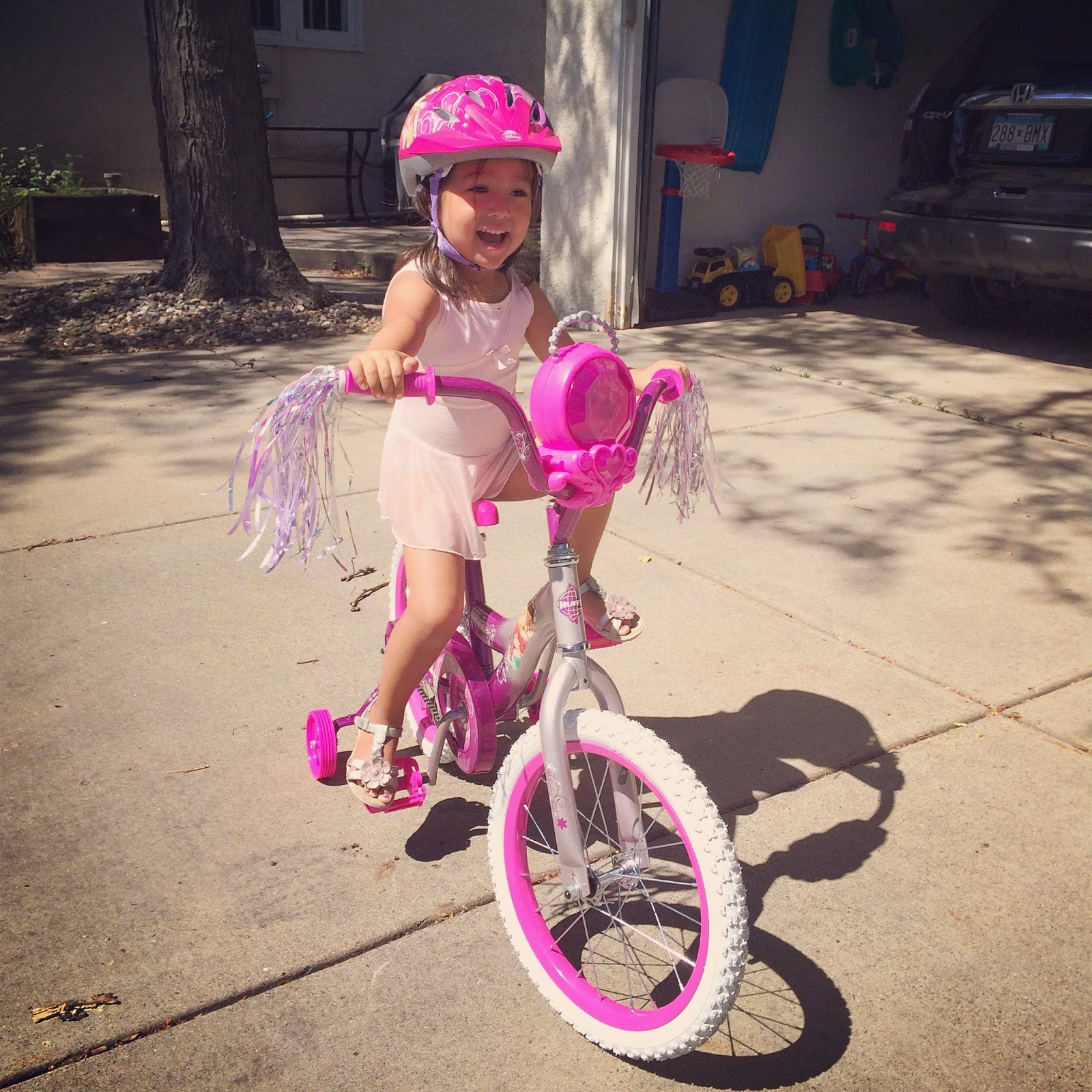 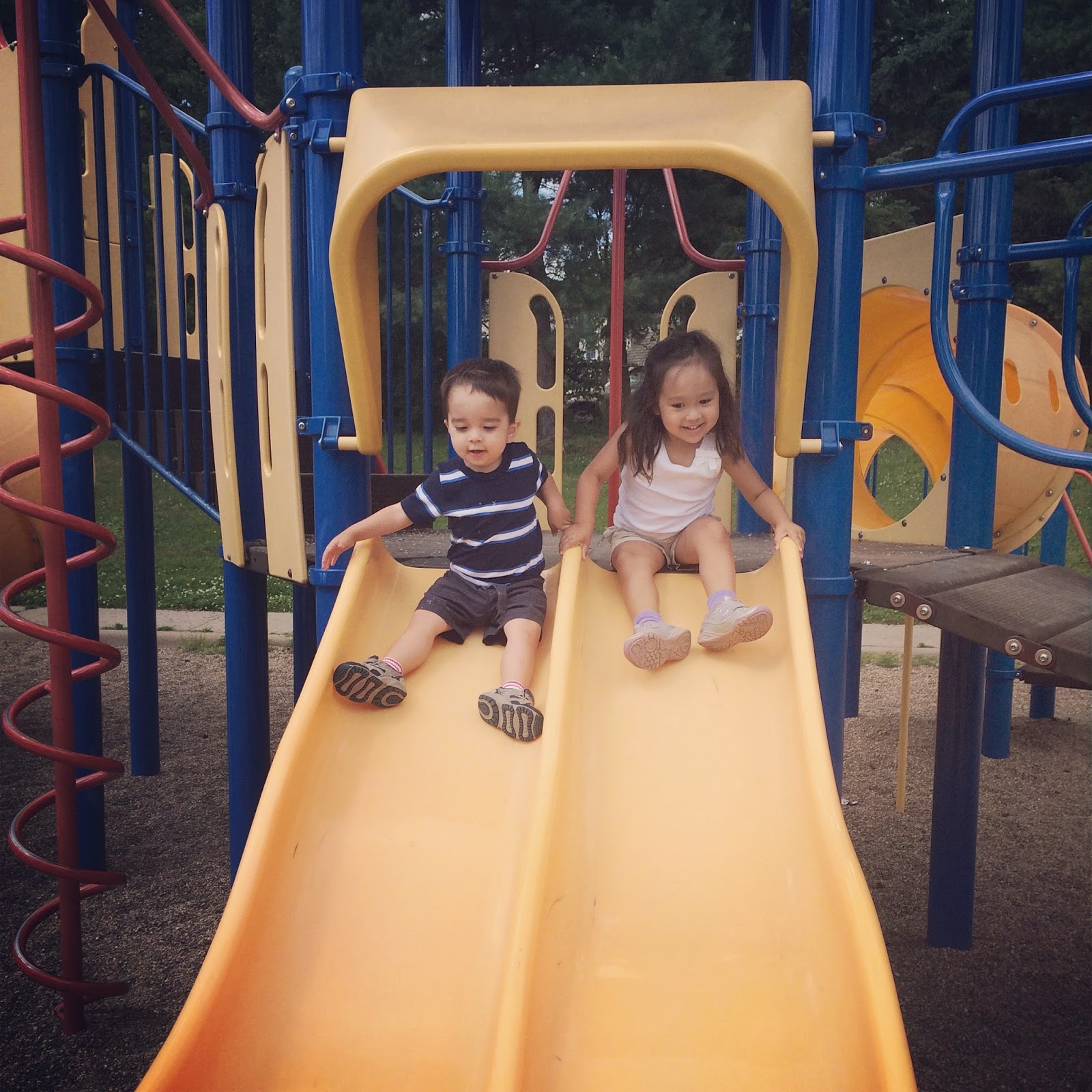 I have wanted to join a CSA for years, but this year I finally gave it a shot and shared with a friend. Best decision ever!  I'll blog more about this later. 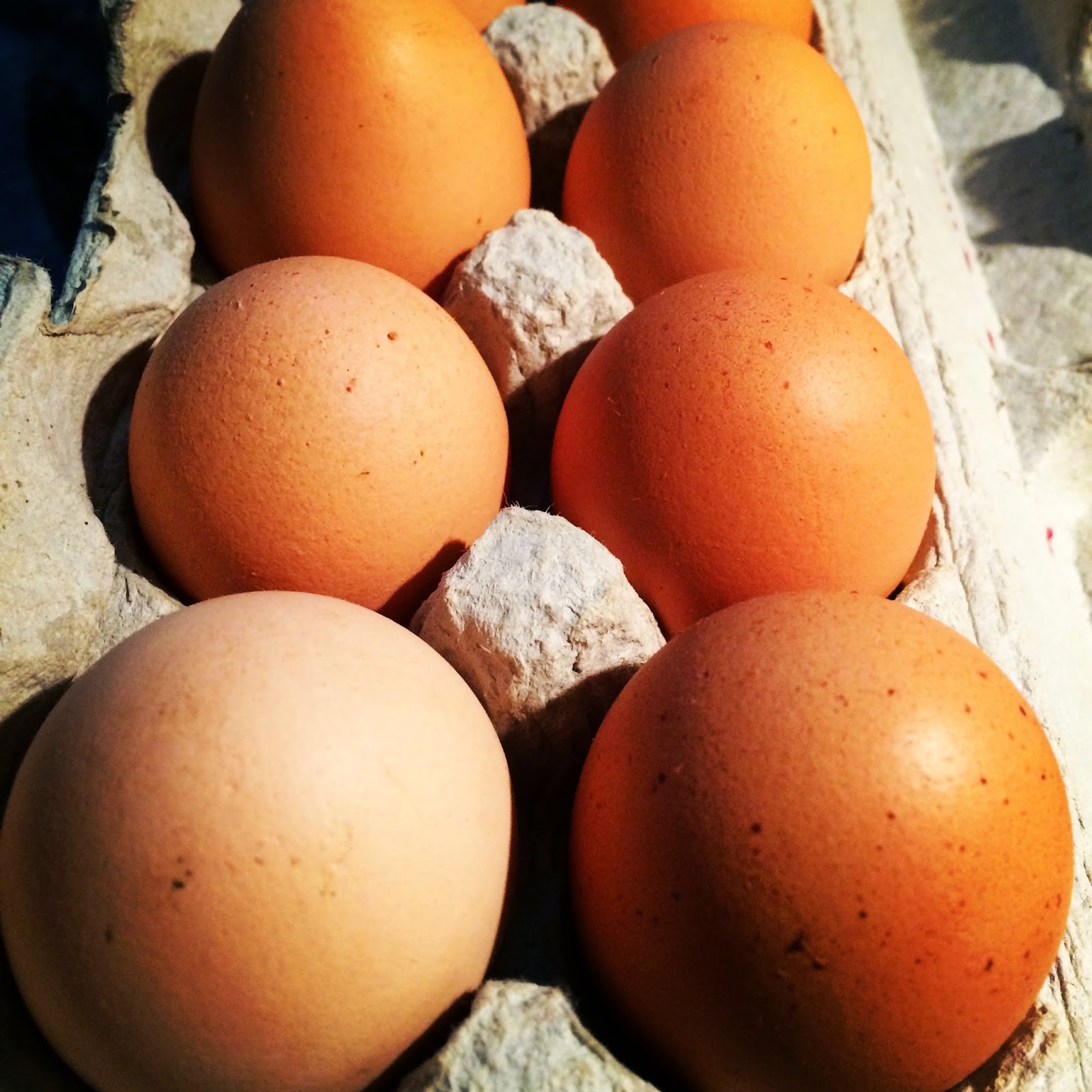 I already talked about our Dirty Dancing vacation, which was awesome.  But last weekend we went to SoCal for my beautiful, wonderful cousin's wedding.  Here we are, investigating the Pacific Ocean (which Anna kept calling Lake Harriet): 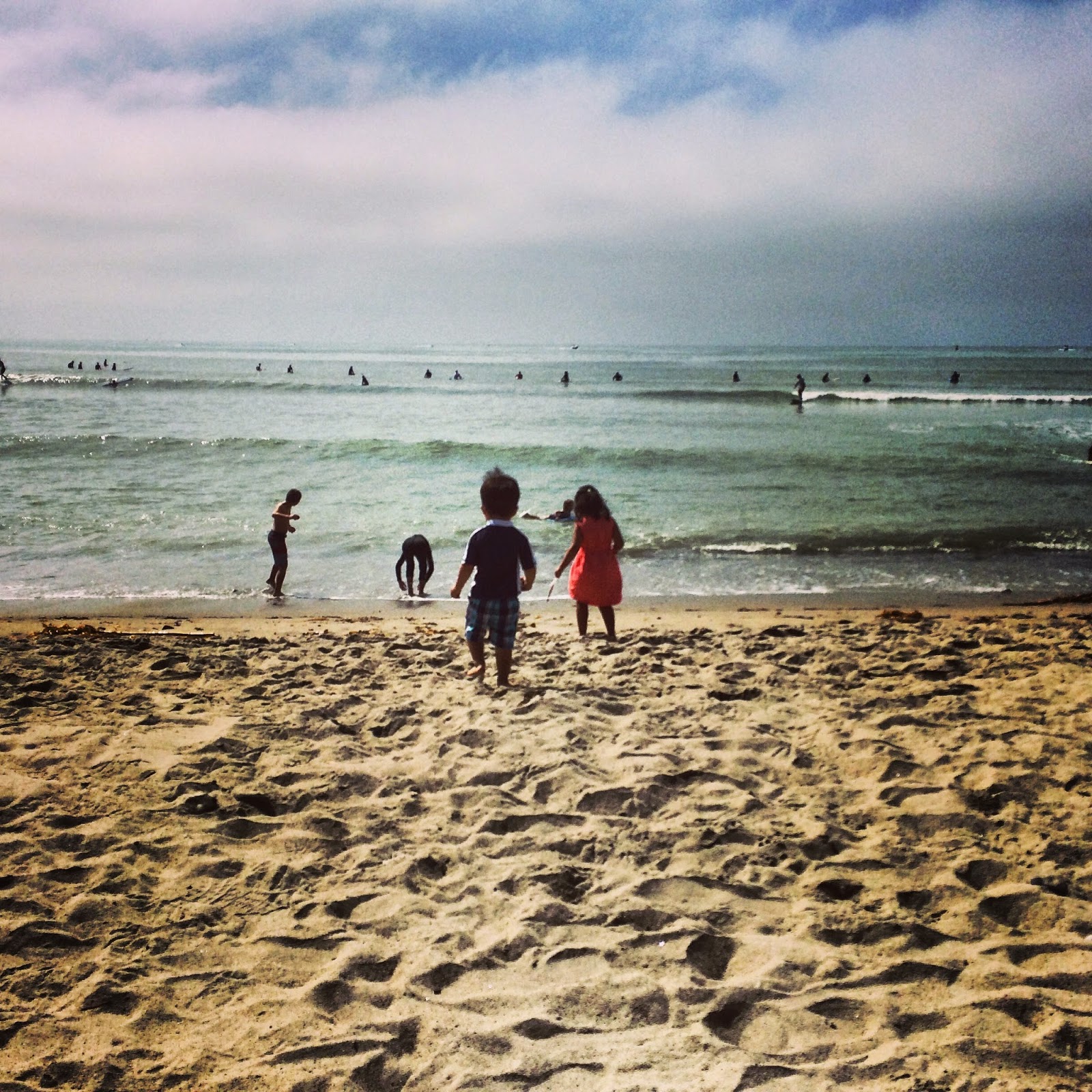 Anna reaped the benefits of her first pinata: 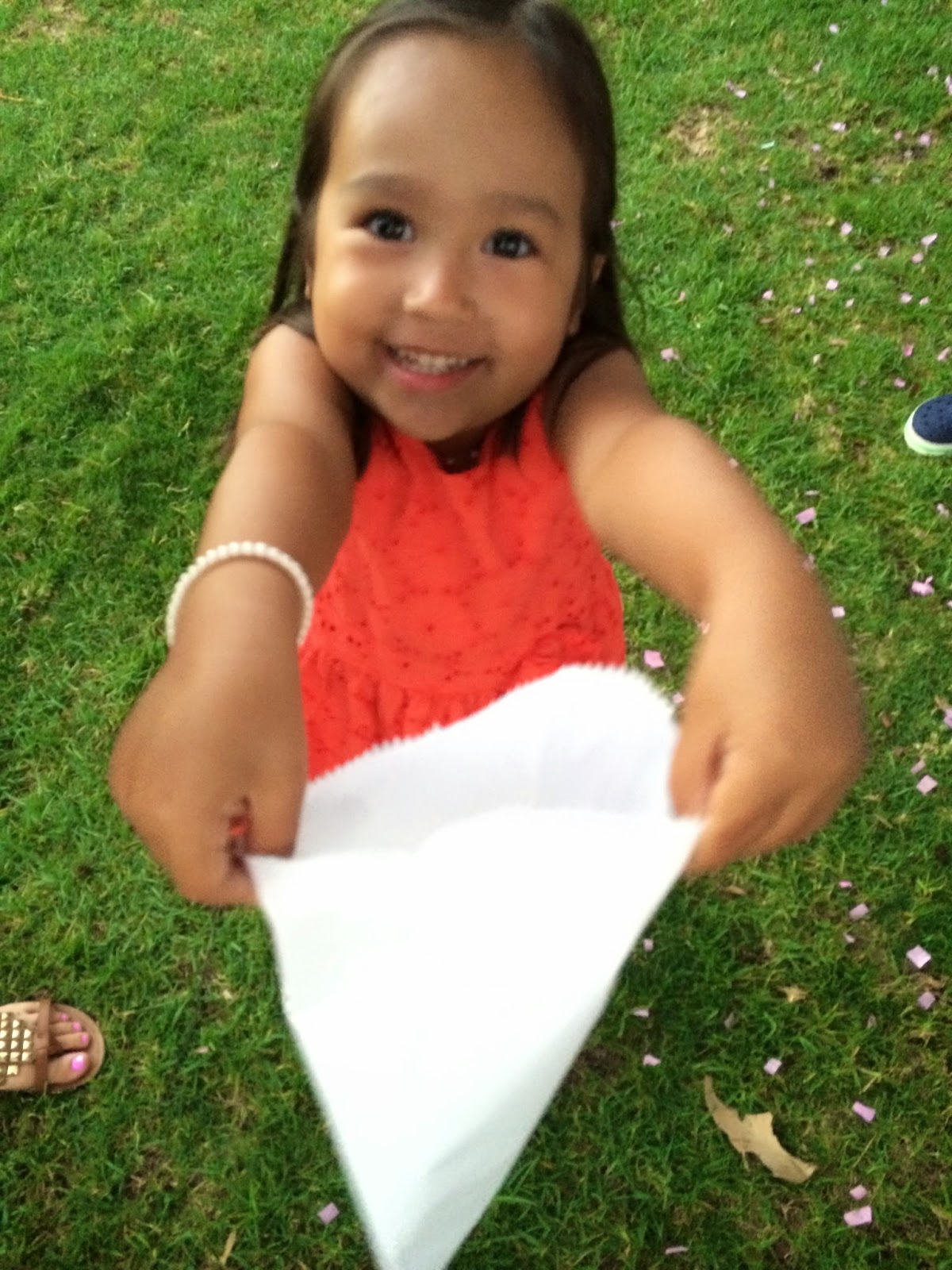 And throughout all the chaos of the weekend, I was so grateful for a chance to catch up with family I all-too-rarely see. 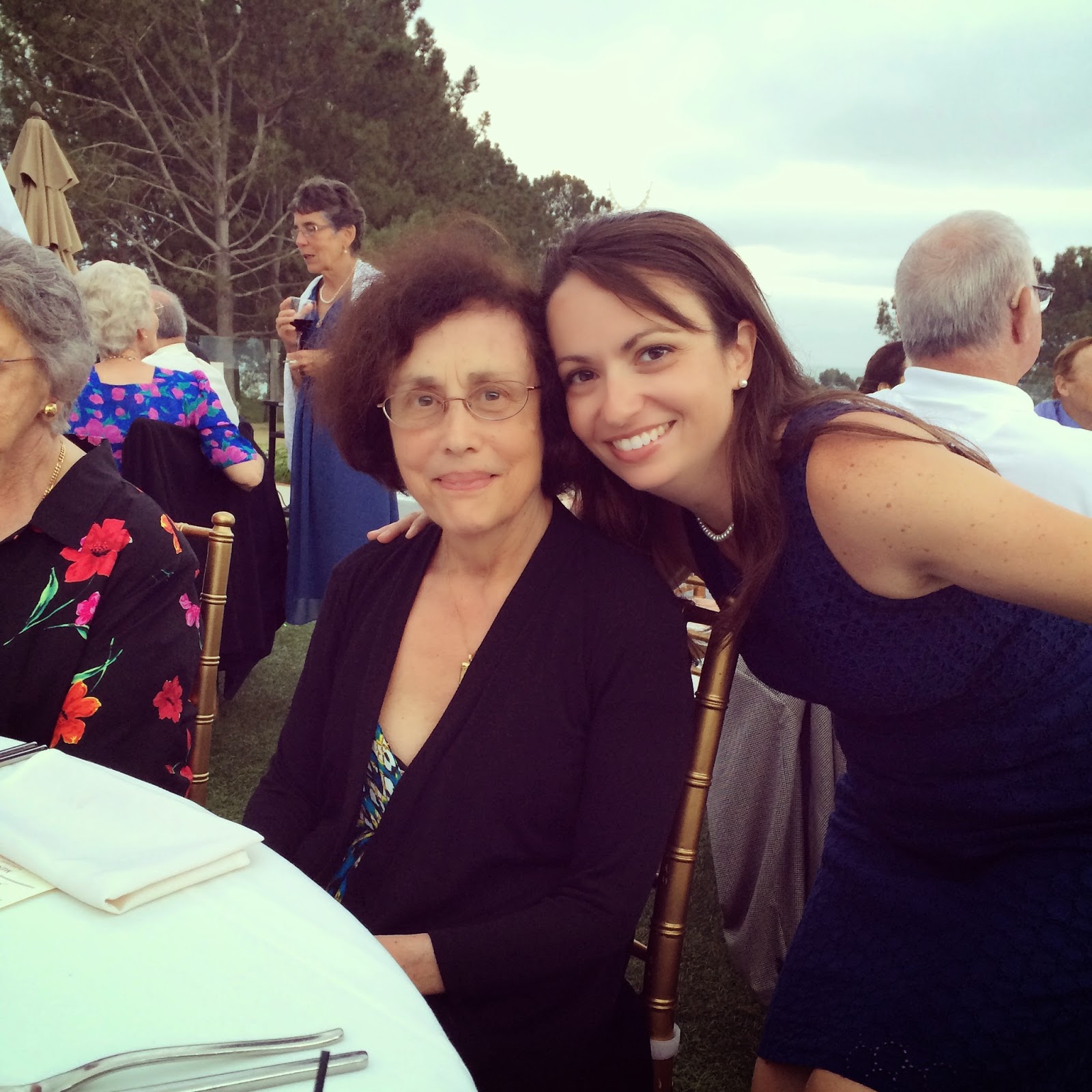