A Woman in her Thirties Equinox

Yesterday I turned 35.  WOWZA.  Thirty-five is... well, it's a lot older than I was when I thought I was 'getting sooooooo old' in my twenties.  I'm not a big birthday person, and I'm not sad in the least about getting older.  But I do think birthdays are a time of reflection, and yesterday I found myself reflecting on the best advice I ever received.  Here goes:

I swam on a swim team for ten years.  Despite being a strong swimmer, I was never a fast one.  Actually, I was almost always the slowest in my age group.  For ten years.  That's a long time to be the slowest at anything.  I have memories of it bothering me when I was very young, but as I got older I accepted it for what it was.  I had lots of friends, lots of fun, and WAY too much sun for my years: 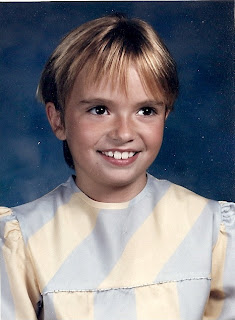 Take a moment and soak in this picture.  Just soak it all in.

We used to do these drills in swim practice called 'hypoxics'.  Basically, it was controlled breathing.  Lap one you would take five breaths, then four, then three, etc., until you got to the final lap where you didn't take any breaths at all.  Like I said, I was never awesome at swimming.  But I ruled those hypoxics.

Until it got to the final lap.

One morning, my swim coach, JR, pulled me aside.  JR must have been about nineteen years old, but to me he seemed ancient.  He was also an incredibly fast swimmer, and we all admired him.  (I wonder whatever happened to him?)  He was not interested in hearing me complain about not being able to make my last hypoxic drill.  At all.

'Why did you breathe?!'  I remember him demanding.

He rolled his eyes and knelt down next to the wall.  'Yes,' he said sternly. 'You can.'

'I can't,' I repeated.  Everyone else can, I could have continued.  But I can't.

Something clicked within me in that moment.  I can't say what.  Something very primal.  I think about that moment all the time, considering I am a woman in her thirties who tends to oversimplify things.  I think this was the moment when I realized (most) things really are that simple.

I have used this advice in thousands of ways throughout my thirty-five years.  Quit my job?  Write a book?  Move to China?  Move again?  And again?  Take a chance?  Take a risk?  Don't breathe.

Now, more than ever, this advice sticks with me.  A woman in her thirties at the middle of her decade takes a moment to consider how far she's come and how far she's still going to go.  I might be thirty-five, but I'm still that swimmer in the pool, still questioning my next steps, still forming a picture of what I want the future to look like.

And choosing to make it happen.  Choosing not to breathe.
Posted by L. Shanna at 12:19 PM