A Woman in her Thirties is Totally Awesome

I prefer mornings.  This is not to be confused with being a 'morning person'-- I'm not.  It's just that I know when I work best, and I work best when it's early.  If you need evidence of this, give me a call between the hours of 4:30 and 6:30pm, when life if at its most chaotic around here.  It's not pretty.

When it comes to being a Mom, particularly of the stay-at-home variety, particularly of the constantly traveling husband variety, my mornings now, more than ever, are sacrosanct.  My ideal morning starts at 5:30 with a shower (by myself-- bliss).  Then I walk downstairs to feed Dan and have a bowl of Cheerios with banana (my favorite breakfast).  Then I sit at the computer, answer emails, and read the news.  Sometimes, when life is particularly beautiful, I get to sit down in front of the TV with a cup of coffee and watch the Today show. 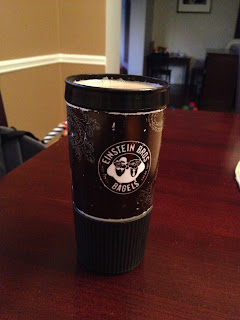 I realize this is not the most exciting of mornings, but for me, it is essential.  My mind regroups.  I feel connected to life outside my house.  I breathe.

But these little stinkers often have a different agenda: 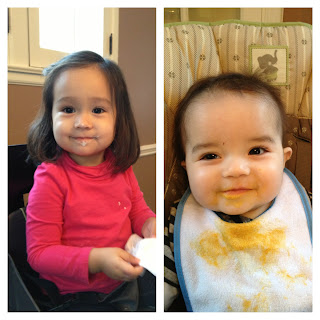 And on those mornings I think to myself, while I scramble to get the mouths fed before too much screaming ensues, as I gulp down my coffee while simultaneously fixing bottles, keeping Dan from the table, and trying to fit in a moment to brush my teeth, that other women are so much better at this than me.  They do this and get to a full time job every morning.  They probably don't call a friend on the way to dropping their kids off at pre-school, asking when things get easier.  They probably wear make-up, too.

I hadn't realized how much this was eating at me until this morning, at yoga.  I was well aware that this was going to be my last break for awhile, considering L is off to Vegas for a million years eight days.  I was dripping sweat and shaking through an crescent lunge when the teacher said, 'Let go of your ego.  The fact that you are even here is amazing.'

He went on to swear at us, but his words stuck in my head.  And while I continued to work, I thought about all the other things that are pretty amazing about me:

1.  I have kept my New Year's Resolution to drink more water.  Amazing.
2.  For the past couple of weeks, I've been able to get both of my children to nap at the same time in the afternoon.  Amazing.
3.  Last week I gave my book to a self-publisher/small press and they loved it.  Amazing.  (More on this later.)
4.  Yesterday, when leaving a play date, Anna turned and said, 'Bye Bye!  Fank you!' Amazing. 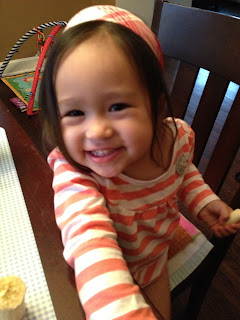 Which lead me to think about all the other challenges I've faced in the last four and a half years.  How I'll be thirty-five this May and I've done so much, accomplished so much, and while I might not have the hottest bootie in yoga pants, my kids are happy.  I'm beyond fortunate.  Life is good.

I think a lot of women in their thirties get caught up in the lists of all the things they're not.  I know I do.  But when I got home this morning and saw the look of exhaustion on L's face, I realized that I was not alone in being overwhelmed sometimes.  Two young kids is a lot of work, and while I am certainly not perfect at being a Mom, I'm doing plenty of things right.

A woman in her thirties focuses on those things.  Then she makes herself a cup of coffee, and revels in her awesomeness.
Posted by L. Shanna at 12:41 PM