A Woman in her Thirties Gets Magical. Again.

Twenty months ago, I was a woman in her thirties newly inducted into the whole 'Mom' business.  I relied heavily on my many baby books to get me through the eat-less days and sleep-less nights.  And by 'relied on' I mean 'allowed myself to be crushed by'.  Every book made me feel like I was doing something wrong.

Until the Magical Suit: 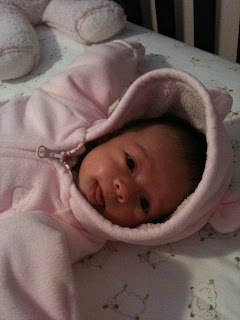 The Magical Suit was the only thing Anna slept in for about four months.  Every nap, every night.  I don't know if it was the snuggly hood or the swaddling-without-swaddling feel.  What I do know is that without the magical suit(s), I would have been sunk.

I thought it was a fluke.  A funny story I could tell her potential suitors (when she's allowed to date, which is to say when she is forty.  Or so.).

Then I wrote this post last week, about how Aaron was such a good baby.  I knew while I was typing it that I was probably jinxing myself, but then I thought, 'Nah.  A woman in her thirties doesn't believe in jinxes.'

WRONG.  Let's just say that the couple of nights that followed that post were... brutal.  So what did I do?  I pulled out the magical suit.  And... 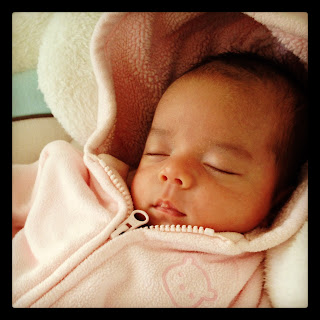 Yup, my son is wearing a pink magical suit.  I dare you to have a problem with that. 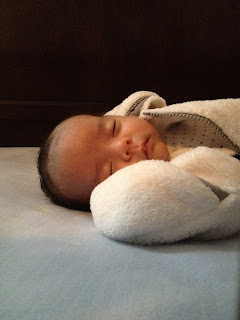 This one wasn't quite as magical for Anna.  It's magically delicious for Aaron.

A woman in her thirties really shouldn't toot her own horn, but this is an exception.  I am sleeping in 3-4 hour chunks at night, and by newborn definition that makes me THE SMARTEST MOTHER ALIVE.  Summer, winter, fall, or spring, all babies need a magical suit.  Magical suit means magical Mom.  And magical Mom is... magical.

A Woman in her Thirties-- One Down 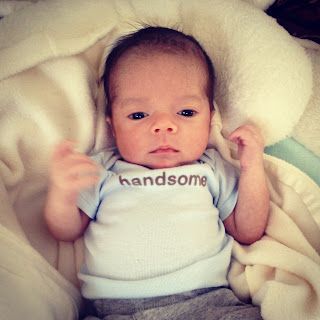 This week you are one month old.  If someone were to have asked me six weeks ago what I was most nervous about bringing you into the world, I would have said I was most nervous for the first month. But here it is, come and gone.  AND WE ARE ALIVE.

As a woman in her thirties with three siblings of my own, I am hesitant to compare you to your sister.  The attention-seeking nine year old in me wants to stamp her foot in protest every time I'm tempted to do so.  But considering Anna is my one point of reference when it comes to actually doing this whole Mom thing, I can see why people do it.  Which is my convoluted way of saying please, let's just keep this between you and me, but...

YOU ARE A WAY EASIER BABY THAN YOUR SISTER.

Phew.  Okay, there.  I said it.  I'm not proud of it.  But it's true.  (Anna, when you are old enough to read this, keep in mind that you turned into the most adorable, good-natured, and sweetest little girl that ever walked the face of the planet.  But you were a hard baby.)

Case in point, Aaron:  You sleep.  On your back.  Even when someone isn't holding you.  Most of my pictures of you are ones where you are deep in dreamland.  Did you inherit your Dad's ability to fall asleep anywhere? If so, God has blessed you with a tremendous gift, and I expect you to use it on every plane ride in your future.  My jealously knows no bounds. 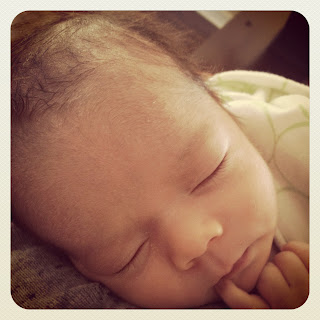 Second case in point:  You eat.  Let's put it this way:  One of my biggest fears this time around was going through the same breastfeeding hell I went through with Anna (Hey, Anna.  I love you.  So much.  You know that, right?  And you are the smartest, most muchiest...).  Anyway, you came into the world a tiny peanut, and as of last week are OVER SEVEN POUNDS!!  Every day I look at you filling out and it makes me feel like I'm actually doing something right.  A woman in her thirties LOVES feeling like she's doing something right. 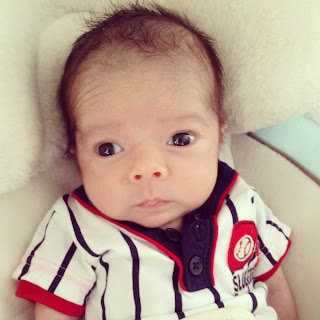 We have been joking with everyone who has been following the pregnancy and birth drama that you have met your quota of scaring us.  Between several days of jaundice and Bili-bed therapy: 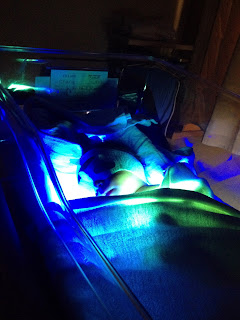 And two days spent in the NICU because your heart rate kept dipping too low: 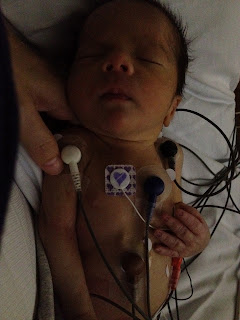 You, Mister, are done with drama.  No broken bones for you.  No sneaking out of the house when you're in high school.  No girlfriends before you're done with law school (What?  Did I say that?  No, I couldn't possibly...)

Anyway, what I'm saying is that it's time for us to start enjoying each other.  The best thing about this being the second time around is that I know how fast the time goes and understand that the sleepless nights will eventually end.  You will suddenly be a little young person, like someone else we happen to know pretty well: 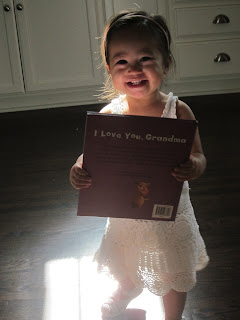 (One my my favorite pics from Auntie M's collection earlier this month...)

And as any woman in her thirties knows all too well, the time goes by too quickly.  So in case I forget to say it, or in case I forget to show it, know that all the craziness that went into bringing you into this world has been more than worth it.  You've already given me so much, more than you could know.  I promise to return the favor.

A Woman in her Thirties Separates Fact and Fiction

First off, thanks to all for the comments and emails regarding A-Rod's birth story.  All is well and happy over here, and for that the Universe has gotten much acknowledgement over the last couple weeks.  Xie Xie, for reals.

Since the weather has been... what's the word... (Oppressive?  Horrible?  Unbearable?) lately, I've had a lot of time to think about all the ways in which having a second child has been nothing like I expected.  And I knew what to expect, thank you very much.  I've been down the newborn road once before.  But you know how people always say that no two babies are alike?  Well guess what-- THEY ARE RIGHT.

Here are a few 'helpful' pieces of advice that people gave me, and my assessment of their accuracy. 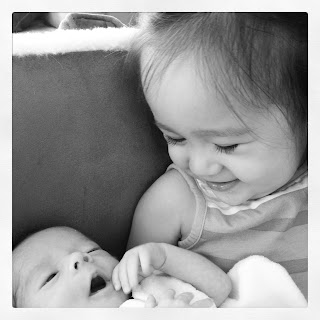 Assessment:  FALSE
For the most part, Anna hasn't been terribly interested in Aaron.  She calls him 'brother', as in, 'Hey, brother!' when she notices him.  There have been a couple of swatting incidents around feeding time, but other than that, AB is doing alright with the change.  For now, anyway.  I guarantee she reserves the right to change her mind at any point between now and age 18.

2.  Breastfeeding is much easier the second time around. 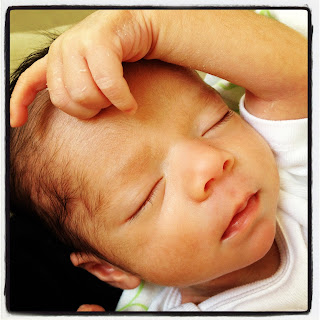 Assessment: TRUE
Yes, one is still bionic.  Yes, it was still a bit painful at the beginning.  But now I know what all those lactation nurses meant when they said Anna just never had a good latch.  A-Rod might have given me a roller coaster of a pregnancy, but he eats like a champ.  PHEW!

3.  It takes a really long time to recover from a C-Section. 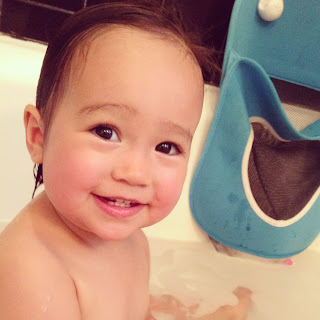 Assessment:  FALSE
There are people who read this blog who I must look at in the face on a regular basis, so I will spare you some of the details about this.  I will say, however, that there are a lot of plusses to a C-Section.  The ability to sit down right now and type this post is one of them.  The only bummer currently is I can't lift Anna Chunkeroo, but we'll be back to bath time together before I know it.  Fear not the C-Section, all ye women in your thirties! 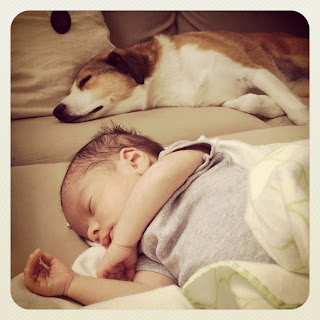 Assessment:  FALSE
Okay, in fairness to Dan the Man, he didn't exactly 'freak out' when we brought Anna home.  He wasn't all that happy, either.  He moped around the house for a few weeks, and even had a couple of accidents inside, which he never does.  I was prepared for that to happen again, but so far Dan has been totally fine with the new addition. And by fine, I mean totally uninterested.

Assessment: FALUE.  TRALSE.
I had so many women say contradicting things about this that I didn't know what to expect.  Now I can see why the opinion is so varied.  In some ways, yes, we are much more confident this time around.  When the postpartum blues hit, I knew what they were and had the tissues ready.  I don't fastidiously document Aaron's feeding and sleep schedule this time around, because I know that he will eat and sleep when he wants.  Logistically, I'm much more sane. 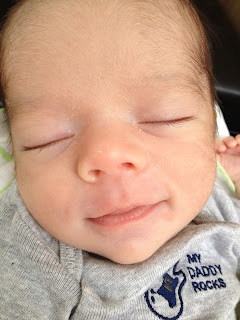 But yes, adjusting to two is hard.  It's much more an emotional adjustment than anything else.  Turns out I was right to take advantage of my alone time with Anna, because now I have to share my time with her.  And it breaks my heart to do it, it really does.

L's sister was here last week and captured this moment: 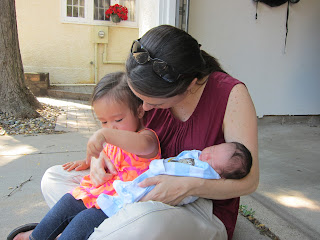 Not the greatest picture of any of us, but I'm so grateful for it.  Anna was playing with sidewalk chalk, and I was sitting down with Aaron.  Anna walked over to us and said, 'Sit down?', and for a split second I thought I was going to have to turn her away.  But then I moved Aaron to the side, and Anna slipped right onto my lap, and at this moment I am telling her, 'Don't worry, Bub, there's room for two.'