A Woman in her Thirties Makes Pad Thai

Let's go to Thailand today, shall we?

A few things about Thailand: 1) It looks like this at sunset, which makes it my happy place: 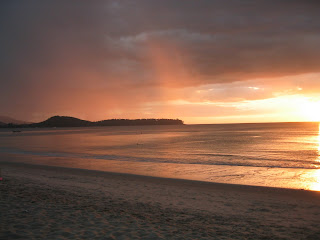 P.S. That water is bath temperature, and crystal clear as far as you can see.  No joke.  Not even Hawaii can compare.

2) Thai food is amazing when it's done right.  And it's hard to do right.

I've been to Thailand three times, and I can say that even in Thailand I found that the food was either MIND-BLOWING or really not so good. One dish that I have found to be particularly difficult is Pad Thai.  If you like Thai food, you know what I mean.  You order it at a restaurant and it's either too oily, too salty, the wrong noodles were used, not enough meat, etc.  Some places are okay... but you're always chasing that perfect dish.  The one you had on the beach once, right after a $5 massage, and the water against the rocks looked neon, like this: 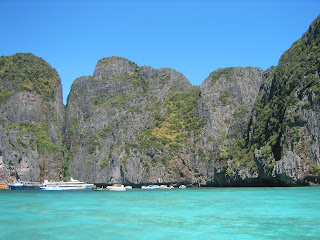 This is where that dumb Leonardo DiCaprio movie, The Beach, was filmed.  I looked for Leo or Leo look-alikes when I was there, but all I got was this lousy view of paradise.

I have, however, found great Pad Thai right here in the Twin Cities.  It's really easy-- you just have to go over to L's house at Christmas, when my way-cooler-than-yours sister-in-law is visiting, and wait for the night when she cooks Pad Thai.  See?  Much cheaper and easier than getting to this beach: 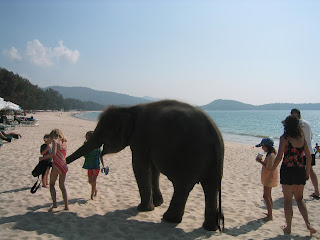 Where the elephants just sorta chill out with you while you drink Singha.

Have I mentioned how much I love Thailand?

Anyway, a few years ago, my so-totally-awesome-and-I'm-not-kidding sister-in-law shared her Pad Thai recipe with me.  Here it is: 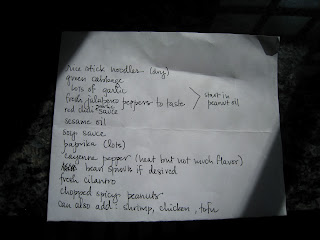 You will notice that this is not a recipe as much as it's a list of ingredients.  A woman in her thirties shouldn't be intimidated by too many things in life, but despite living in Asia for a long time, I am horribly intimidated by cooking Asian food, especially if I don't have clear directions.  So this 'list' remained in my 'cookbook' (binder full of recipe scraps-- probably should do something about that mess) until a few weeks ago when I was feeling brave enough to take my secret woman in her thirties decoder ring to it.

And the results were awesome, if I do say so myself.  Here's how it goes down (ingredients in bold):

1.  Fill a bowl full of HOT water, and soak your rice stick noodles for 20 min.  I used this kind (I found them at Super Target), about 1/2 the package.  Notice how they are the thick kind, not the thin kind.  I don't like the thin kind, unless they are in soup or spring rolls, but hey, if you like the thin kind, I guess you can try it out.  Just remember to soak them for a few minutes less than the package tells you too.  And you're weird. 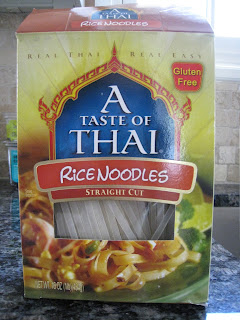 Note:  The package says to soak them for 25 min.  I say do 20 min, because you're going to stir fry them later anyway, and no one likes soggy noodles.  No one.

2.  Meanwhile, chop up your green cabbage-- the whole head.  Picture your ex while doing it, and it shouldn't take longer than a minute.  Then dice your jalapeno pepper(s).  I used ONE pepper without the seeds because I'm pregnant and indigestion-ish.  However, if you like spicy, go to town with the jalapenos (there is much more spice to come, though, so beware).  Then chop your garlic, unless you are lazy like me and buy the already chopped kind. 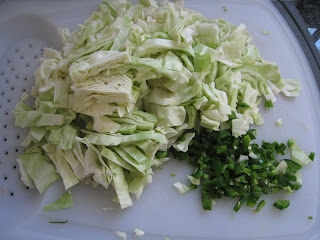 3.  Heat about a tablespoon of PEANUT OIL in your wok or pan.  (I'm cool and have a wok, but if you're not cool and don't then whatever.)  Notice the emphasis on PEANUT OIL.  Don't be dumb and substitute with vegetable oil.  And don't be SUPER dumb and substitute with olive oil.  Add the diced jalapeno, garlic (be generous-- I used a large teaspoon of the already chopped kind), and ALL of the cabbage.  Mix it up all good and stuff.  Then add about a tablespoon of soy sauce and mix it up some more. 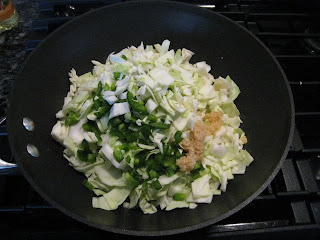 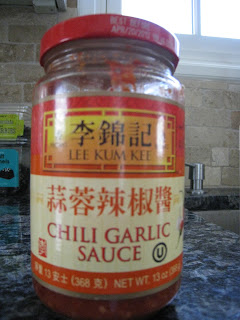 Do not be scared by the Chinese characters on the jar.  If your grocery store has a decent international foods section, you can find this there.  If not, any Asian market will carry it.  Do not be scared of the Asian market.  It is a wonderful place where all sorts of treasures can be found.  I'll post about that, someday.

You might be tempted to substitute with another chili garlic sauce.  You might pick up the Safeway generic brand in a tube and say, 'this looks like it might be okay'.  If you do that, you are on your own.  I take no responsibility for the results.  Our food contract is null and void.


I added about a 1/2 a teaspoon, just enough to get the cabbage tinted red.  Then sprinkle with paprika and/or cayenne pepper, just a few shakes worth. Again, I'm pregnant-y and I can't take the heat I normally can.  L, however, added more chili garlic sauce to the finished product.  It might also be noteworthy that he goes through at least one large bottle of Sriracha a month, and I am not exaggerating.  What I'm saying is be careful with the spice. 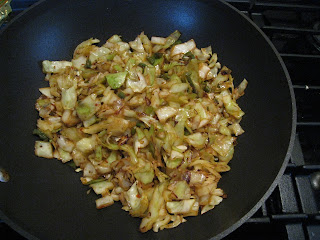 5.  When the cabbage is nice and wilted (about 10 min), transfer the whole mixture into a large bowl.  Add another tablespoon (or less) of peanut oil to the wok and add shrimp (I cooked a pound because I prefer my protein to noodle ratio to be high).  Add a quick drizzle of sesame oil and another 1/2 teaspoon of chili garlic sauce, enough to tint it red.  If you are so inclined, you can cook chicken instead.  Or maybe you're a veggie and prefer tofu (though I haven't the slighted idea how to cook that...) 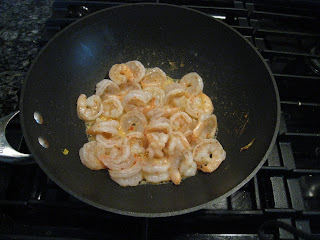 Just a few minutes, just to get them cooked through.  When they're done, pour them on top of your cabbage to get them out of the way.

6.  By this point, the rice noodles should be done soaking.  (I know what you're thinking-- this is the longest recipe ever-- but really it's fast.  I'm just talking a lot.)  Drain them, add another dash of peanut oil to your wok, and add the noodles.  If you're feeling feisty, add some more chili garlic sauce.  If not, skip it.

7.  Add all the rest of the stuff from the bowl to the wok, and stir fry for a few minutes.  It should look like this-ish: 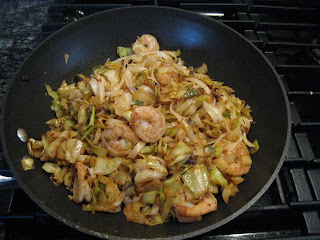 8.  Serve with the following garnishes (my opinions of said garnishes are just an added bonus):
Lots of chopped peanuts (Awesome sister-in-law likes spicy, I used regular)
Lots of chopped fresh cilantro (Don't be dumb and use the freeze dried kind)
Scrambled egg (I mean, if you want, I guess)
Bean sprouts (I'm guessing you'd have to cook these, but I wouldn't know because bean sprouts might be delicious but they also gave me the worst food poisoning I've ever had in my life and I refuse to ever touch them ever again.) 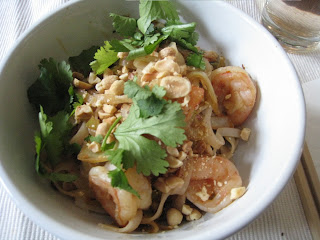 And there you have it.  Delicious Pad Thai, no airfare or fish sauce required.  Thank you, jie-jie!  And to the rest of you women in your thirties, you're welcome.
Posted by L. Shanna at 5:25 PM