A Woman in her Thirties Acknowledges the Universe

I was nineteen the first time I was robbed at the bank.  It was my fifth day at the teller line.  A man came in, told me he had a gun, and demanded all my money.  I gave it to him, and he left.  The FBI came, the police came, and I recounted the story about fifty times before they finally sent me home for the day.  'A counselor will be calling you to help you cope with the trauma,' I remember someone telling me, but I was annoyed and really tired, so I just went home and went to sleep.

A few weeks after it happened, I was driving to the South Bay with my boyfriend at the time.  I can't remember why.  What I do remember is that he turned and asked me a simple question.  Something like, 'Where do you want to get lunch?' or something like that.

And I completely lost it.  'I don't know!  Stop pressuring me!' I remember screaming.  And then I started banging on things and pulling on the door handle and demanding that he pull over before I jumped out of the moving car.  He did, and allowed me to have a total mental breakdown right there on the side of 680.  Let's just say it was not my finest moment.

Why would I tell such an unflattering story about myself here?  For one, how many women in their thirties do you know that can start off a story with, 'I was nineteen the first time I was robbed at the bank.'? I mean, come on.  It's like the one interesting thing about me.  And secondly, it illustrates just how far I haven't come since nineteen.  I was only about nine weeks along when my OB told me about the Vasa Previa, and I made the mistake of going home and googling it.  I spent a couple of hours reading the horror stories and felt myself shutting down, preferring not to deal. I made light of it, shrugged it off, and selectively closed my ears to how serious it was.

The realization began to weigh on me in the last few weeks.  I felt myself preparing for hospital bed rest as though preparing to go to jail.  I got nervous for every ultrasound and for every appointment with the doctors, knowing they were disagreeing about what to do with me.  L and I met with a lawyer to draw up a will and healthcare directive just... gulp... because we probably should.  I felt myself grabbing for the proverbial door handle, demanding to get out of the car.

And then the MRI, which is a post in and of itself.  The good thing about the MRI was that we got images like this: 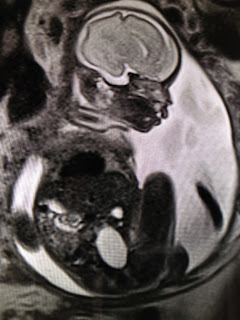 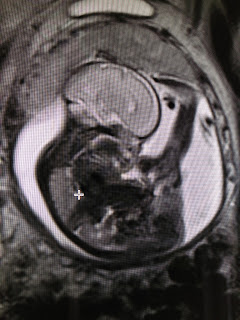 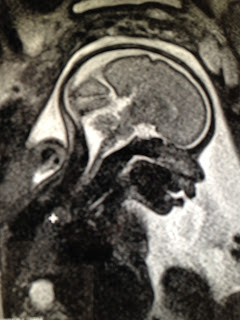 Holy Amazing.  That is my SON.

But the great thing about the MRI was that we got the news.  Things. Have. Moved.  MOVED!  Not much, but enough. Enough to (hopefully please oh please) go full term.  Enough to (pretty pretty please) avoid bed rest.  My OB actually smiled at me for the first time in months, like she wasn't afraid I was going to spontaneously combust anymore.  I keep trying to describe how it feels to finally receive good news after so many months of gloom and doom, and the only way I can describe it is to say I feel like I've been granted a miracle. I know that as a good church-going woman in her thirties I should feel comfortable saying that, but to be honest it feels very strange to admit it in such a way.

And yet that's exactly what it is-- a miracle.

I read a wonderful, beautiful, fantastic book recently called The Fault in Our Stars.  One of my favorite lines came from a character wrestling with prayer-- how to pray, who to pray to, why we pray if things are already planned out for us.  He said, 'I think the universe just wants to be acknowledged.'  I know a million prayers by heart (go Crusaders!), but something about that line resonated with me.  I thought of it yesterday when I took Anna to the zoo, and this morning when I went to yoga, and just now when I had to remind myself that I'm not dreaming-- everything is going to be okay.

So, Universe, consider yourself acknowledged.  Thank you, from all of us.
Posted by L. Shanna at 11:14 AM