A Woman in her Thirties Gives Thanksgiving the Bird

I had big ideas for this Thanksgiving. For the last two years, we have eaten here. Now I know what you're thinking. A woman in her thirties hosts and prepares a proper Thanksgiving. Believe me, I've prepared my fair share of turkeys, even when living in China. But the last two years I've come to the realization that I don't love Thanksgiving food. It's okay. But it doesn't seem worth the hours and hours of work to prepare all the food when neither I nor anyone in my household goes gaga over it. So it's off to Chinese food we've gone (or taken out, as my baby was not even a week old last Thanksgiving), and it's been great.

This year I wanted to start a new tradition in our family, especially since I was going to have the whole morning free. I signed us up for the Walk to End Hunger at the Giant Mega Mall of Craziness, under Team C. This post was going to be all about how a woman in her thirties teaches her daughter to be grateful; to give back.

And then Wednesday happened. Now keep in mind that Anna had FOUR immunizations the day before, so when she was running a fever I wasn't surprised. But there was definitely something different by Wednesday night. She had a slight cough, and I felt like I was counting down the minutes until her next dose of Tylenol. When she woke up at 9:00pm throwing up, I took her temperature and gasped when I saw 103 degrees. Off to the ER we went, only to find that her temperature when we got there was 104.7. If you're wondering what it feels like to hear that your baby has a temp of almost 105 degrees, it feels a bit like you've been punched in the stomach. By the Incredible Hulk.

There were many hours spent in the ER, many pokes and prods that I will refrain from reliving in detail. Let's just say that my little Pumpkin was very, very brave. And easily the cutest thing I've ever seen in a hospital gown: 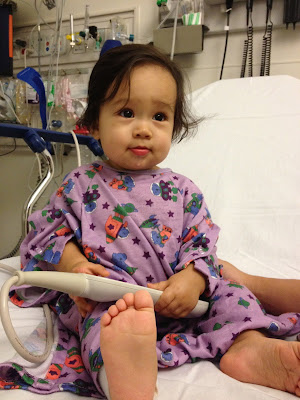 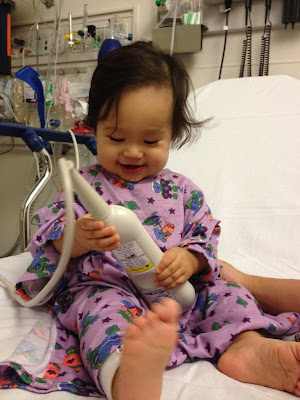 And after an X-Ray, the diagnosis was clear: Pneumonia. My baby has pneumonia. If you are wondering what it feels like to hear that your baby girl has pneumonia, it feels a bit like someone has carved your heart out with a spoon and handed it to you, even though your stomach is still killing you from that punch by the Incredible Hulk.

My big ideas to feed the hungry yesterday were clearly shot, so we spent most of the day snuggling in front of the TV watching Sesame Street. L went out to pick up Chinese food, and while we tried to salvage Thanksgiving by getting something special (Beijing duck), it clearly wasn't the same. Here is our feast, in all its Styrofoam glory: 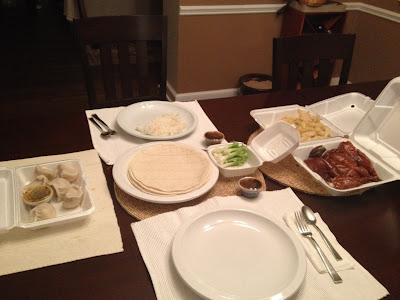 So this Thanksgiving didn't exactly go according to plan. But I was thinking about it as I was falling asleep last night, about how a woman in her thirties rolls with the punches and makes the best of things. Sure, I hadn't planned on spending the night before Thanksgiving learning to use a rectal thermometer, but it's a good thing I now know how. And as much as I wanted to punch the nurses in the face every time they gave my baby another shot or drew more blood, I'm thankful they were able to figure out what was wrong. I'm thankful for antibiotics. I'm thankful for Elmo and Ellen DeGeneres, both of whom can make Anna smile when she's sick.