A Woman in her Thirties Chokes

Monday afternoon, Anna and I were doing our weekly produce run at J-Bears. (Side note- a woman in her thirties does not buy salmon at the same place she buys batteries.) It was late for Anna's lunch, so I did what I see other Moms do all the time-- I let her eat a little snack as we shopped. The snack in question was those little freeze dried yogurt-melt deals, the ones reserved for the space program back in the 80's.

I had just placed a jar of cardamom pods into the cart (I'm embracing my Indian side since discovering curry isn't so bad after all), when it happened. I heard Anna let out a cough that I'd never heard before. I looked at her face and saw her mouth opened in a small o, her face turing bright red.

My pumpkin was choking.

This is the part of the story when I tell you that a woman in her thirties, especially one who JUST TOOK A RED CROSS SAFETY COURSE NOT TWO YEARS AGO, remains calm. She thinks about her training, expels the astronaut food from her daughter's throat, and moves on with her day.

Except that's not what happened. As my baby choked, I... choked. I remember sticking my finger in her mouth (hoping to do WHAT, exactly?) while I began to pant loudly. 'Ohmygod, ohmygod, help!' I was saying to myself, only I was also saying it aloud. A worker, who happened to be standing a few feet away, came over to me, helped me lift Anna out of the cart. 'She's breathing,' she said. 'It's going to be okay.'

As the worker got ready to push on her stomach, Anna managed to dislodge the piece stuck in her throat on her own. In doing so, she also dislodged the entire contents of the apricot/sweet potato squeeze pouch she'd had an hour before, all over her white sweater, my shirt and jeans, and into my hair. I have never been so happy to be covered in orange puke in my entire life.

I was a wreck when I got home. When I told L what happened, his first response was, 'She's never having those yogurt things again!' (this is funny, if you know L.) But the truth is, I can't blame Gerber. I was trying to do too much. I gave her something that I knew would be difficult for her to chew and swallow, even if she wasn't in a shopping cart. And worst of all, I panicked. I lost my cool. It could have been so much worse.

This week has been all about two things. One, signing up (again) for an infant safety course. This time with L, and this time with the added perspective of actually having a child of my own that might need my protection. And two, slowing down. AB went back to her normal, happy self within a few minutes after the choking incident, but it has taken me a few days to shake off what happened.

A woman in her thirties does better next time, I keep telling myself. And from the looks of it, Anna agrees. 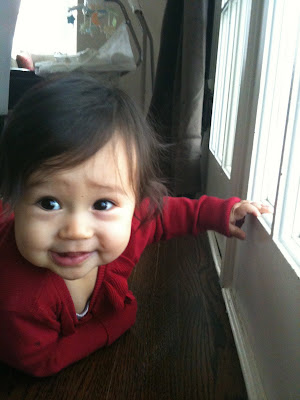 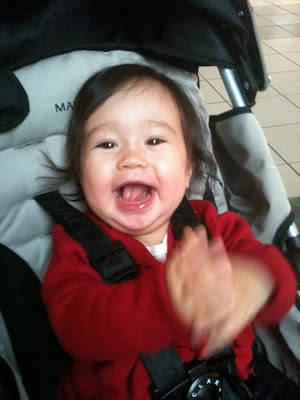