A Woman in her Thirties Bids Farewell

It's summer, 1987. Mom is sorting laundry while simultaneously making PB&J for the kids. 'Hurry up,' she says, giving us plates to take with us to the living room. 'It's starting in three minutes.' This is before the days of TiVo, before reality TV and networks devoted to 24 consecutive hours of sensationalized news. We sit cross-legged in our normal spots, humming the opening credits by heart.

Most women in their thirties have a soap, and mine is All My Children.

I didn't understand it then, the power of the soap opera. Back then it was a way to pass the long summer hours when we weren't at the pool. Soaps were for made for stay-at-home-moms and their bored children, a way for us to leave our reality for an hour a day for one in which people never worked, always wore full make-up, and aged overnight. You knew, if there was a scene in a car, that car was going to crash. You knew, if there was a wedding, someone was going to barge through the doors just as the priest said, 'speak now or forever hold your peace', and it was likely that person might have been presumed dead. Fridays were the cliffhangers. No one died on Wednesdays. And every scene would end with a passionate, closed-mouth kiss.

I will admit that I haven't watched a soap, even AMC, since the early courtship of Tad and Dixie. My memories, like many of my olden days, are rose-colored and fragmented. There have been times that I've caught a couple of scenes on the treadmill in the past few years and been astonished by the ridiculous plot lines and questionable acting. But despite that, I was sad to realize that today was the last day for All My Children. Anna won't have memories of watching the show on a hot summer afternoon with me, laughing at the story and crying at the funerals. She'll never understand that, in the land of Pine Valley, people have forgotten twins and face transplants. She'll have to learn about multiple personalities some other way, and that is a shame.

I traded a few text messages with my sister, a devout AMC follower for years, this morning. I confirmed with her that this was indeed the end for Erica Kane et al, and asked her if she needed some support to get through the day. We laughed, and then began to share our memories of AMC as children.

And it was at that moment that I set my TiVo to record the last episode. It's not about seeing how the writers will wrap up a forty year story line, or whether or not Josh Duhamel will come back for a guest appearance (please). It's about taking a little bit of time to savor the memories. And a woman in her thirties passes them on: 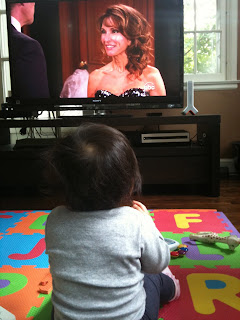 A Woman in her Thirties is Double Digits

Something crazy has happened. My baby girl has turned ten months old. 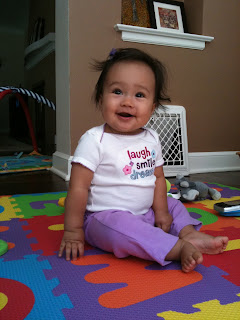 I am writing this right now while watching you play on the floor of the kitchen. You just picked up your play cell phone, pressed your favorite button for the 'Itsy Bitsy Spider' song, and are waving the phone in front of you, bouncing and smiling. Apparently you are a fan of cell phones and dancing, so I have allowed myself a quick daydream into the teenager you will someday be. And thus, a woman in her thirties crumbles a little inside.
I know I keep saying this, but all those months in the single digits were nothing compared to the fun you are now. You babble constantly, wave at everyone (particularly at Dan), and are eating all the foods that Mom and Dad eat. Yogurt is your favorite, followed by crusty bread: 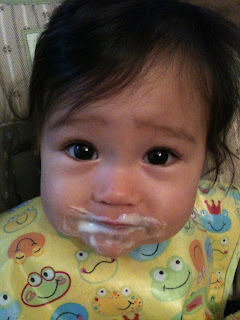 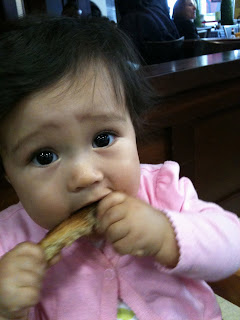 And pasta with Arrabiata sauce. Look, Bubs, we are a spicy family. It's not too soon to take a little heat.

You are a seriously good baby. I don't think I realized it until we flew home from California last week and the guy sitting across the aisle from me was actually angry that you were so good. 'My kids would never have behaved like this on an airplane,' he grumbled while you bounced on my lap and smiled at him. 'Never.' What can I say? Double digits look good on my Pumpkin.

And speaking of Pumpkins, it's starting to look a lot like Fall here in Pleasantville. I have to be honest-- not being in a classroom this September has been bittersweet. I love the first day of school, even the first weeks. I loved telling my kids that it was a clean slate for all of us; that this year was going to be exactly what we made if it from here on out. It's been enough to give a woman in her thirties a (minor) mental breakdown in the school supply aisle at Target, but let's just keep that afternoon between you and me.

I guess there is something inside all of us that likes the idea of letting go of what's past and focusing solely on the future. At least that's what I did in teaching. But that was before you. This September, I don't want a clean slate. The past nine months haven't always brought out the best in me, but I find myself holding on to them with all my might. They have been stress-filled, sleep-deprived magic. 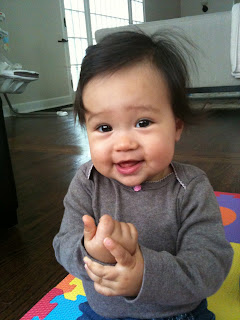 So if you must grow up, and it seems like you must, know that no matter how many cell phones you hold or how many dances you will eventually go to, there will always be a part of me that is here, right now, with you. You make my past, my present, and my future worth living.

A Woman in her Thirties Learns

When I started this blog a million (three) years ago, I did so with the intention on focusing on things I learned in my new decade. If there's one thing I know, it's that a woman in her thirties is always learning. Here are a few things I learned over the last 11 days in California:

2. My Mom watches The Real Housewives of... something. That is awesome.

3. I haven't gotten much better with age when it comes to crafting, bow-tying, and table decorating. Thankfully, my friends have.

4. Upon seeing a stretcher being taken down the stairs where your mother is staying with your baby while you dance the night away at a wedding, it is advisable to wait until the car has made a complete stop before flying out of it in tears (False alarm-- everyone was fine. But I did pee my pants a little.) 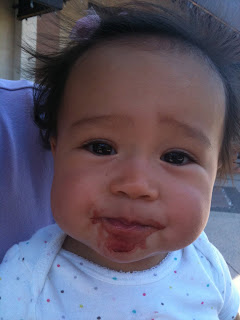 6. So is the Canadian Bacon Mom doesn't want on her breakfast sandwich: 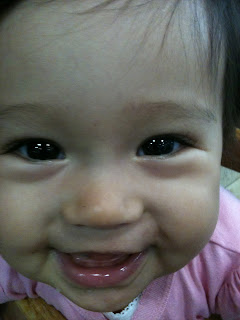 7. No matter how many times I call Hertz to make sure I won't have any problems with my rental car, they are still going to mess it up anyway. And I will cry about it.

9. Many people offered to help me in the airport when they saw me traveling alone with a nine-month-old. They were all, without exception, traveling to or from the Twin Cities. #Minnesotanice

10. My baby is ridiculously, amazingly, semi-annoyingly good. In my twenties I would have credited superior parenting. Now I know it's mostly luck.

The last thing I learned hit me this morning as I woke up in my own bed and looked out the window at the oh-my-god-winter-is-coming breeze outside. For a long time, years now, I've felt torn between many places. 'Home' has been a relative term. When my plane was touching down in San Francisco last week I thought, 'It's so good to be home!'. But then, yesterday, I thought the same thing as the plane touched down in Pleasantville. So I decided that if a woman in her thirties can be mother, wife, daughter, bridesmaid, friend, teacher, etc, etc, etc, she can also find home in more than one place. She might leave her heart in San Francisco, but that doesn't mean she also doesn't leave it a million other places. It doesn't fragment and fall to pieces-- it regenerates wherever she lands. And in that way, a woman in her thirties is always home.
Posted by L. Shanna at 12:20 PM 5 comments: