A Woman in her Thirties Mixes it Up

For those of you who don't know me in the physical sense, I am French, Sicilian, and Maltese. If you're wondering what that looks like, in my case it looks Mexican, apparently. My husband, L, is Chinese. He looks, well, Chinese. One look at our baby, and it's pretty clear who she takes after: 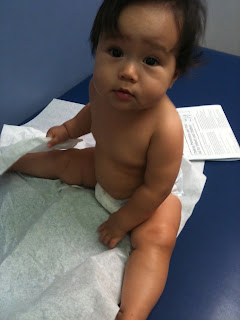 I was having lunch with a friend from birthing class when I was first approached by a stranger who asked me when I adopted Anna. I was so taken back that I was speechless. 'Uh,' I sputtered, 'My... uh... husband is... Asian...' I said, almost embarrassed. 'Oh!' the woman exclaimed, and that was that. My friend and I laughed the rest of the lunch over it, especially considering our husbands had 'helped' us deep breathe together when we were swollen and pre-natal . But in some ways, I was saddened by it. Not that someone had thought I'd adopted (I still think that might be in the cards for us, someday), but that someone would be so presumptuous as to assume it, based on how my daughter looks. That, and at the time my nipples were still sore and bleeding.

I thought it was a fluke. I saw myself telling the story to Anna when she's older, when I tell her about our adventures in China and how I once yelled at a taxi driver who was talking about my big nose and thought I couldn't understand him. 'Don't ever assume,' I could hear myself telling her one day.

I would need several hands to count how many times it's happened since. It's almost always in the grocery store, and always by a well-meaning person. 'When did you get back with her?' is the most common question, followed quickly by 'When did you get back from Korea with her?' (Korea?) I've gotten 'Is she yours?' a couple of times. And just yesterday, a young girl in Babies R Us said, 'I don't mean to be mean, but is your baby mixed with something?'

Since this is looking to be a trend, the sarcastic woman in her thirties that I am has thought up of a few comments:

1. What baby?
2. I had a mirror and watched her come out of my own vagina thank you very much.
3. Yes, we adopted her from Sweden.
4. And for the girl at BRU-- 'She's mixed with Amstel Light. Don't judge me.'

However, a woman in her thirties must remember that most of the time there is no need to humiliate. These people are simply trying to make conversation, trying to connect with me and my baby. Sometimes-- sometimes-- the truth is more fun than sarcasm.

'My husband is Chinese,' I now say. 'And we have the most beautiful baby in the world.' 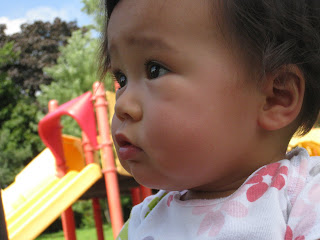