A Woman in her Thirties Entertains

It's fair to say I've hosted a lot of get-togethers. A LOT. I think the poor people who lived next to us on Beverly or the other unlucky souls who lived above us in our apartments at Woodlake would concur. Back in my twenties, entertaining guests meant a crock pot full of Que Bueno and several bags of Doritos. If you were lucky. Most of the time we wouldn't sacrifice room in the fridge for food, as the beverages were of utmost importance.

I realized today just how far the proverbial pendulum has swung. One my most favorite people in the world, Fehmeen, who happens to be married to one of my other most favorite people in the world, ALS Boy, came to visit me in Pleasantville. Fehmeen and I met in the teacher credential program a million years ago and hit it off instantly. She is the strongest, most confident, most no-nonsense person I know, and I don't say that just because she has been dealt a pretty difficult hand in life. I say it because it's true. She is amazing.

She deserves a lot more than Que Bueno.

A woman in her thirties knows who she can trust, and when it comes to culinary matters, I trust Ina (thanks, H). In true domestic goddess fashion, I chose an appetizer that sounded very posh: 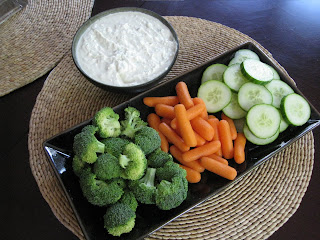 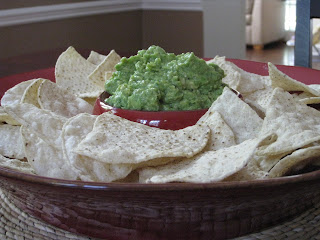 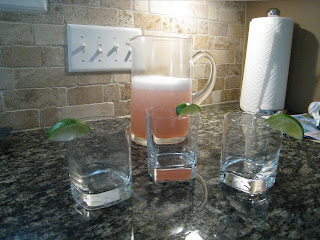 I maintain that some of the worst decisions of my life were made when tequila was involved, but again, this is Fehmeen. She is special. And no one deserves a mid-day margarita more than she does.
The food was great, if I do say so myself, but the company was better. I think Dan and Anna would agree: 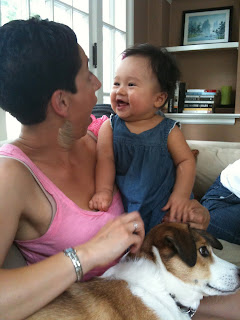 And even though Fehmeen kept me up way past my mama-in-her-thirties bedtime, I am still on a high from seeing her yesterday. She reminds me what it means to be a good friend, a good mother, a good teacher, and of course, a good wife. No wonder ALS Boy loves her so much. She makes my attempt at mature entertaining look pale in comparison.
Posted by L. Shanna at 5:25 PM