A Woman in her Thirties Takes Advantage

I firmly believe that a woman in her thirties should take advantage of every break life has to offer her. One look at the amount of Groupons I've purchased in the last year is an example of that belief. Life is hard, people. Take the good deals when they come.

Yesterday offered me such an opportunity. If you'll remember way back, I shared a story about my Grandfather who died of skin cancer, and the nudie pictures I took as a result. Since then, I've been pretty good about seeing the dermatologist regularly. My most recent appointment was scheduled because, along with eye babies and peeing my pants, pregnancy did a number on my skin. And by 'number', I mean this very weird red spot appeared on my leg, just above my ankle. I figured it would go away, and when it didn't, to the dermo I went.

One look at the mark in question, and my doctor was convinced he knew what it was. 'It's a blah blah blah tumor,' he said in the same tone he might use to tell me I have brown hair and brown eyes.

I blinked at him. 'Um. TUMOR?' I said. I don't know about you, but where I come from, there are no positive associations with that word.

He laughed at me and said it's totally harmless, that he could remove it in five minutes with only a couple stitches and minimal scarring. So that's what I did-- I hopped up on the table, watched him cut the skin out (awesome!), and left the office with a little piece of paper that said, 'Care After Surgery', which had me cracking up. I couldn't help but send L, who has been in Arizona all week and didn't know I even had the appointment, a text message that said, 'Surgery went fine. Stitches out next week. It's good to be alive.'

I woke up today with no appointments to get to, but a to-do list a mile long. My first instinct was to get moving on it, but then I remembered the band-aid on my leg. 'I has surgery yesterday,' I said, bringing Anna in bed with me. 'Maybe we should hang out here for awhile and sing some Bruno Mars.'

So we did. And then, instead of going to the grocery store, we hung out on the grass at Lake H: 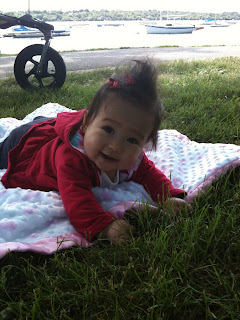 And tonight, instead of getting started on the laundry that has yet to do itself, I made these: 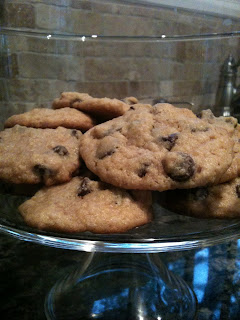 Because my to-do list will still be there tomorrow. I am recovering from surgery, after all. A woman in her thirties deserves some cookies for all her pain and suffering.
Posted by L. Shanna at 5:15 PM