A Woman in her Thirties Meets. Her... Goals? 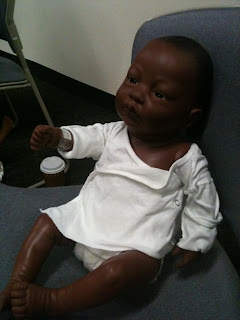 Diana was the baby L and I had during our 'Breastfeeding and Newborn Care' Class while I was eight months pregnant. It was with Diana that we learned how to swaddle, how to care for a belly button, and the various positions for breastfeeding.

Diana was a trooper. She napped. She sat quietly during the lecture. She pretend-latched perfectly. So even though there was a part of me that was worried about breastfeeding and knew it was going to be challenging, Diana made me feel at ease. I felt as ready as I could be; as ready as a woman in her thirties can be for anything. I gave myself a goal of breastfeeding for six months. Where did I get that goal? I pulled it from the clear blue sky. But I had it, nonetheless.

I am tempted to spend the next three hours writing a Bible-length diatribe about my breastfeeding woes, but many of you reading have already heard them. I won't bore you. I will just say that between blisters, engorgement, lopsidedness, twice-weekly visits to the lactation nurse for three months, pumping (then not pumping), supplementing, mastitis (on my birthday- awesome), gallons and gallons of tears, and pain that I didn't think could be possible outside labor, I can tell you that breastfeeding tops a short list of the hardest things I've ever done in my life, including putting myself through college and learning Chinese.

Anna B. is now six months old, and I am still breastfeeding. H says that I deserve a parade. Many people have commented on how happy I must feel for sticking it out. The woman in her thirties in me who has read all the hype about how breastfeeding is best and blah blah blah agrees... kinda. In some ways, I'm glad I stuck it out.

But in some ways, some major ways, I'm not.

(Gasp! Shock and awe! What kind of a mother would say such a thing?)

I have been thinking about this a lot over the last few weeks. Shouldn't I be proud of myself? I did it. I met my goal. A woman in her thirties sets goals and meets them. But there is something untrue about that statement, at least in this situation. Because while I had a goal of breastfeeding for six months, I also had a goal of enjoying my perfect baby girl in her first six months of life. I might not have verbalized it, but part of that goal meant being confident in my ability to feed her (something that didn't come for a long, long time). As it is, I cannot look at pictures like this: 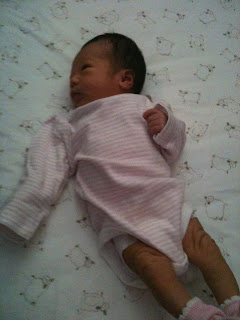 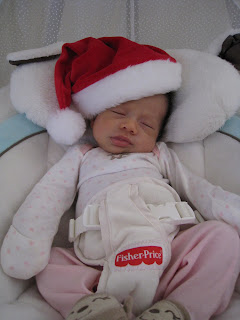 And not get a little sad. So much of that time was spent begging for some relief from advice nurses, explaining that every time she needed to eat I felt like I was preparing to get punched in the face, that I forget what she felt like then. I can't remember what her cry sounded like. But I sure can remember what mine sounded like.

That was not part of the goal, and it is a heavy price to pay for being the stubborn woman in her thirties I am.

I do believe that a woman in her thirties should set goals. She should work her ass off to meet them. But she should also put them in a larger perspective. Would I do it again? I honestly can't answer that question right now. I guess I could say that about many things in my life. Maybe that's part of being a grown up-- experiencing, reassessing, and re-setting. And then, with any luck, experiencing smarter next time.
Posted by L. Shanna at 6:52 AM 4 comments:

A Woman in her Thirties Figures

You, baby girl, are six months old this week. Let today go down in history as the day this woman in her thirties realized that all those people were right who said the first six months with you would fly by.

A woman in my mommy group said that six months was her favorite age with her child. I can see why she said that. You are eating some solid foods (peas, sweet potatoes, and bananas--of course--being the favorites): 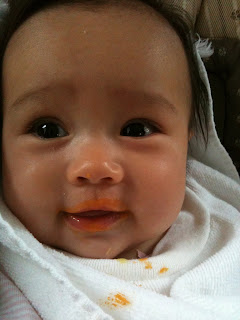 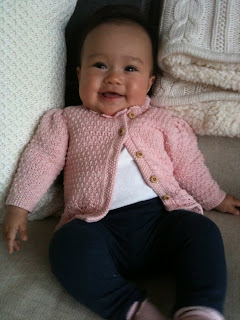 I do have unfortunate news for you, Spunky. Of all the things you could have inherited from me (and it's pretty safe to say you haven't inherited much so far), you seem to have gotten my hair: 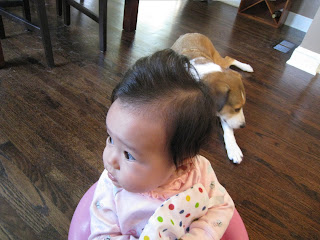 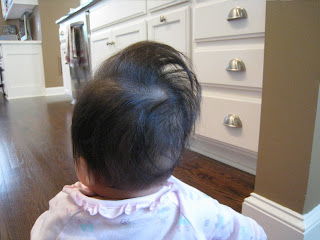 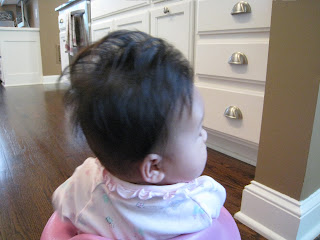 A woman in her thirties definitely knows that there is more to a person than her hair, and that your overall cuteness in every other way more than makes up for your out of control coif, but I might need to remind you of that many times during your life when you curse your hair straightener (and me). I love you, Punkers. Let's just focus on that.

What has amazed me the most over the last few weeks is just how much you have figured out. On your own. I was so worried about the separation anxiety for the last few months, but just recently it seems like you woke up and realized, 'Oh yeah. That boob lady always comes back.' So I've worked out, left you for more than a couple much-needed girls' nights, and am able to plan for things and know that you'll be fine with Grandma and Grandpa. Yes!

But I can't help but think... is this a trend? What other things are you going to figure out all by yourself, huh? Are you trying to tell me that you're not going to need me to tell you just how awesome your swimwear is: 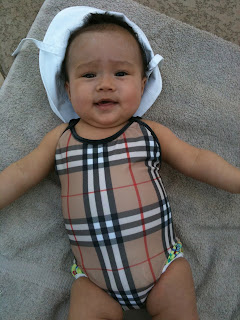 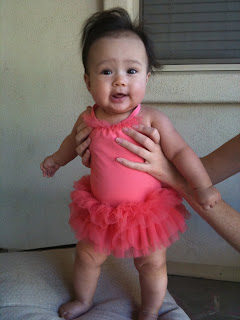 Or just how far you have your Daddy wrapped around your finger? 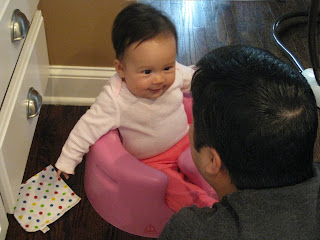 I guess this means that if you can figure out how to let someone else feed you a bottle, a woman in her thirties can figure out that part of being a Mommy is knowing that she doesn't have to do all the figuring for her baby girl. I get choked up when I think about all the choices you have ahead of you, good and bad. Whatever direction all this figuring takes you, I want you to know that I wake up every single day amazed at how perfect my little baby girl is. I can guarantee I always will.

Happy half birthday, Punkerson. There has never been anyone luckier than me.

A Woman in her Thirties Learns from her Mom

Today is my first Mother's Day and my birthday (33 what what!). How does a woman in her thirties celebrate such a momentous double-day? She sleeps in (because 8:30am now qualifies as sleeping in), does several loads of laundry, takes her baby out to buy flowers, and waits for her jet-lagged husband to wake up from his nap and make gwottles. Not exactly the lap of luxury, but better than a kick in the pants, as my Mom would say.

Which has gotten me thinking about my Mom, and all the things she's said over the years. Here are a few that come to mind on this rainy Pleasantville Mother's Day:

1. Take care of your teeth
My Mom cannot watch TV without commenting on so-and-so's teeth. I don't think she listened to a single word Obama said during his campaign for Presidency, that's how overcome she was by his beautiful white smile. Lesson learned, Mom.

2. Don't be easily impressed
I remember once telling my Mom about a friend's parent who had just bought a BMW. 'A B-M-W', I remember emphasizing, when her face remained blank. 'So what?' she said. 'Am I supposed to think he's better than me or something?'

3. Climb
My poor Mom has suffered from arthritis for as long as I can remember, but a few years ago was introduced to an infusion treatment called Remicaid. This stuff has worked so well for her that she came to visit me in Beijing and we climbed the Great Wall of China together. I know women in their twenties for whom this would be too difficult, but she did it. And she may or may not have developed a crush on this guy: 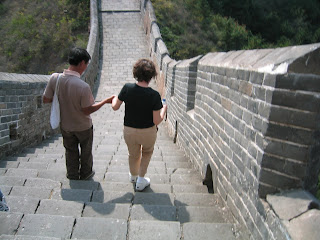 4. Don't avoid cliches... like the plague
My Mom is the queen of cliche. 'Every cloud has a silver lining' is one of her favorites, with 'to each her own' a close second. My students may not be able to get away with saying something is 'easy as pie', but my Mom sure can. Somehow cliches are truer, coming from her.

5. Pray
H and I like to joke that between her Gram and my Mom, we have a direct line to God. While the jaded woman in my thirties that I am struggles every day with spirituality, my Mom has never once doubted God and his Capital P Plan. I envy that more than she knows.

6. Celebrate...
...the right way. Gift giving was never a priority in my house, and for that I am very grateful. Today, right now, I'm enjoying a few more minutes of Mother's Day quiet. I'm relishing in my birthday and the health and happiness the past year has brought me. I'm thankful for my life, my family, my friends, and my Punkeroni: 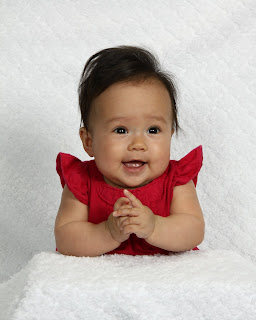