A Woman in her Thirties Gets Filled

A woman in her thirties has probably played 'two truths and a lie' several times in her life. Think back to the first day of high school... come on... you know what I'm talking about. Every time I play (and granted, I've played more than most as a high school teacher), I use the same three:

If you know me, you know that the lie is #3- I have two sisters. I used to work at a bank in college and got robbed twice (I'll have to post those stories later). And I have the world's most perfect oral hygiene. I have never had a cavity. Those were my 'truths'.

A woman in her thirties should not keep secrets, but there is one I've been keeping for six months now. Here goes: when I went for a cleaning last summer (while seven months pregnant), my dentist told me she found not one, not two, but three tiny cavities. That's right. THREE.

Let's talk a bit about my OCD in the oral hygiene department. It is second to none. I'm not exaggerating. I brush 3+ times per day, floss every night, and rinse with Listerine. Every night. No exceptions. People at my previous jobs have laughed at me brushing after lunch or keeping floss in my purse. And while I've had every kind of orthodontic disaster known to mankind happen to me, I have never had a cavity. Never.

'There must be some kind of mistake,' I said to the dentist.

'No mistake,' she said. 'It's because you're pregnant, I'm sure. The baby takes all your calcium...'

'They're tiny,' she said. 'You won't even need Novocaine to fill them.'

My dentist was getting clearly annoyed. 'Blame the baby,' she sighed. 'But I would fill them now be done with it, if I were you.'

I didn't. Despite being busy with a baby, I have had these three blemishes at the forefront of my mind/mouth every day since then. I've brushed, flossed, and Listerine-d more vigorously than ever, hoping that by my next cleaning they will have gone away, and that my dentist would see how wrong she'd been.

A few weeks ago I had another cleaning, and there was no miraculous turn of events. They were still there. And I had to make an appointment to have them filled.

A woman in her thirties should have more poise than I did when going in to my appointment for my fillings. Instead, I told anyone who would listen that it was because I'd been pregnant, I brush and floss every day thank you very much, and really, since there was no Novocaine involved, should we really even call this a filling?

I was in and out in twenty minutes, but the bitterness has lasted several days. I can't help but feel like the gray hairs are next, and have you noticed the crows feet that have developed around my eyes?

How very un-woman-in-her-thirties of me, I thought this morning. I've decided that, while my 'two truths and a lie' games are forever changed, thirty two years without a cavity should be celebrated. With sweets, preferably. And big, toothless smiles. 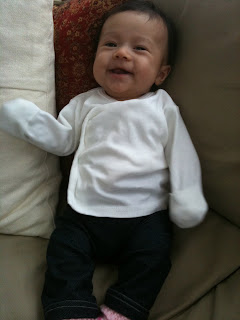