A Woman in her Thirties Doesn't Bother

Last month Daniel got sick. I'm talking sick. Uncontrollable diarrhea at 4:00am sick. Puking on the stairs sick. Just last month I was bragging to my Mom about how Daniel is the healthiest dog in the world, so I guess that's what a woman in her thirties gets for being a showoff.

Poor Dan was put on medication (twice) and a bland diet, but it really has taken upwards of four weeks for him to be 100% better.

In the last four weeks, a lot has happened. I told my school I'm staying at home to be a Mom indefinitely. L has been traveling all over creation, and I've been alone with Anna a lot of the time. I'm still struggling with some serious separation anxiety from my little Punkerson. And then there's cooking special food for Dan. It's not that the cooking has been hard-- it's just boiled turkey and white rice. It's just one more thing to do. Doesn't it look delicious? 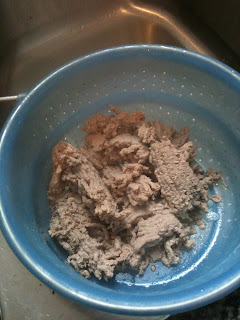 I really didn't enjoy cooking at all until I lived in China, and even then I learned to cook as a way of decompressing after a long day and maintaining the slightest bit of control over my crazy life. I think that's why I've been cooking a lot lately. I've made from-scratch Indian, an assortment of Ina classics, and various concoctions involving coconut rice and risotto. A regular woman-in-her-thirties domestic goddess, that's me. Whomp whomp.

You'd think that L would love that I'm embracing my inner chef, but no. Don't get me wrong, he thinks it's 'alright'. But what he really wants is dog food. You read that correctly. Even though Dan is better, I am still making his boiled turkey and rice, because it's now L's favorite meal. He tops it with lots and lots of this: 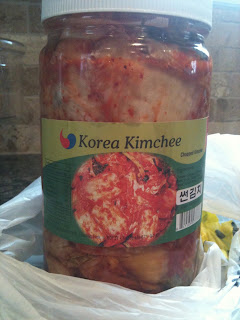 And when he's eating it you'd think I'd just spent hours slaving away on the stove, a la June Cleaver.

This morning I found myself feeling anxious about... well, you know. Woman in her thirties stuff. But when my mind immediately went to cooking something to take my mind off of things, I remembered the chocolate orange mousse still sitting in the fridge, and the chicken masala I threw out last night because it had gone bad. So instead of reaching for a cookbook, I boiled some turkey, made some rice, and by the time I sat down at my computer to write this post, I realized that a woman in her thirties doesn't bother with complicated distractions. Sometimes the best recipes really are the simplest.
Posted by L. Shanna at 6:17 AM