A Woman in her Thirties Poops

Remember that scene in Forrest Gump, when he's out on the boat with Lieutenant Dan and gets a call that his Momma is sick, so he dives into the water to go be with her?

Last week was kinda like that, except that I already had a trip planned to CA to see my family (more on that later), and it turned out that my Mom is a rockstar didn't need my help at all while recovering from surgery. But the thought was there-- a woman in her thirties helps her Mom when she needs it.

Normally, this would be a no-brainer. I've hopped on many last-minute flights with just a carry-on to be with family/party in Vegas/go shoe shopping in Hong Kong. But this time I'd be flying with this little one... 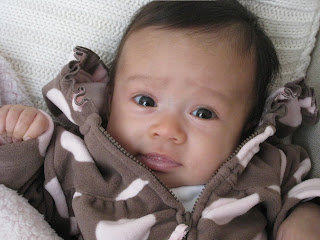 ... who has a way of making even a trip to Target much more exciting than it should be. To say that I was nervous to travel-- by myself-- with a newborn would be an understatement.

Walking through the airport the morning of my flight was surreal. I was a acutely aware of the people avoiding standing behind me in the security line, thinking 'what a cute baby-- I hope she's not on my flight.' I was also acutely aware of Anna, who had yet to poop all morning. We boarded the plane and I knew, the way a woman in her thirties often does, that disaster was imminent. I tried to push the negative thoughts out of my mind.

I'd heard that it was important for babies to nurse on take-off and landing, but Anna had other plans. She nursed as we taxied on the runway, but fell into a deep sleep (one that is elusive to her at home), by the time we took off. I sat shoving my boob into my poor baby's face as we ascended higher and higher, but it was no use. She was out.

And she stayed out for the first two and a half hours of the flight. I read my book (Major Pettigrew's Last Stand- recommended!), talked to my neighbor about his upcoming trip to Australia, and smiled down at my sleeping angel. 'Traveling with a baby is easy!', I heard myself say to my neighbor, and he smiled with what I imagine was mostly relief.

When she woke up, she was all smiles and ready to eat. I remember looking at my watch while she fed, thinking 'only an hour to go!' when it happened.

And by 'it', I mean poop. The biggest poop of Anna's almost-four-month life. I felt the warmth of it travel up her back as she continued to eat happily.

A woman in her thirties has only a few options in this situation. I could have left it, allowing her to sit in her own feces until we landed. Maybe no one would notice the smell or the huge yellow stain on the back of her (adorable) outfit. I could have changed her in the bathroom on the... I have no idea. There is no room for a small adult like myself to go to the bathroom on a plane, let alone change the diaper of her newborn. Or I could have asked for help, as a woman in her thirties often does.

I took my little poop-covered angel to the back of the plane, where two flight attendants cheerfully pointed to Anna's back and said, 'I think she pooped!' It turned out that one of them had twins of her own (yikes!) and understood my plight. She pushed down the jump seat and allowed me to do my business while she shielded us with my hooter hider and the other flight attendant handed me wipe after wipe. It was not the most comfortable of situations, especially considering that the poop had traveled all the way up to Anna's shoulders, but it worked. I pointed to the San Francisco skyline as we landed and whispered to Anna, 'We did it, Punky! We're covered in poop, but we're home!'

Now that we're back in Pleasantville, I keep thinking that we just accomplished the first of what will probably be many flights in Anna's future. And aside from a little poop, the flights were a total success. I still think she was an angel.

See? She even has her wings: 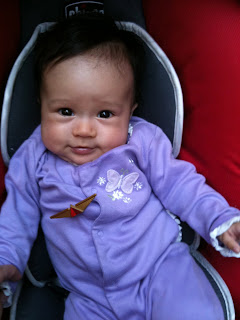