A Woman in her Thirties Gives Up

I'm a big fan of the Catholic concept of giving up something for Lent. Forty days is just enough time to feel like you can make a significant sacrifice, without making you feel like you can't take a single additional second of suffering. As kids in Catholic school, we often gave up things like chocolate or ice cream, but in my twenties I remember being encouraged to give up something more meaningful. Who cares if you give up Jolly Ranchers or coffee? I think the point is to be a better person and stuff.

For the past several years, I've given up gossiping. If you've ever tried it, let me tell you it is tough. No Perez (gasp!), no sitting in the teachers' lounge at lunch swapping hearsay about colleagues or students. I have definitely faltered-- how scary is it that gossip is so second-nature that a woman in her thirties often doesn't realize she's doing it? But it's made me think before I speak or before I buy an US Weekly at the airport, even when it's not the Lenten season, and in that way I think it's served a great purpose.

This year I decided not to give up gossiping. (The Charlie Sheen stuff is just too hilarious. Sorry.) What I decided to give up was more all-encompassing. What I have given up is so much a part of who I am that there isn't a moment that goes by-- even in my head-- that I'm not thinking about it.

I gave up complaining.

The inspiration came to me during a particularly dark afternoon in February, one involving a very cranky baby, 4000 loads of laundry, yet another snowstorm, and a cupboard empty of La Choy's Low Sodium Soy Sauce. Oh, was I ready to let anyone who would listen (L) have it. But then I had one of those moments that a woman in her thirties sometimes has, the ones where she steps outside herself and looks in, and I thought about just how lucky my life is.

Of course I have had my low moments. (Listen closely-- you might hear L laughing all the way from Portland right now. He's seen first hand just how [un]successful this attempt has been.) I had plenty of disparaging things to say when I had to throw out two ounces of perfectly good breast milk, since Anna was not happy with it mixed with rice cereal: 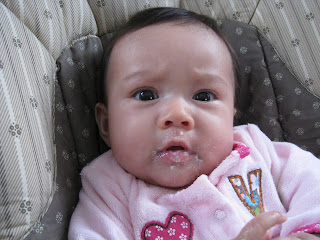 I had plenty more things to say last week when our wonderful dog, Dan, had diarrhea all over our bedroom carpet. At four in the morning. 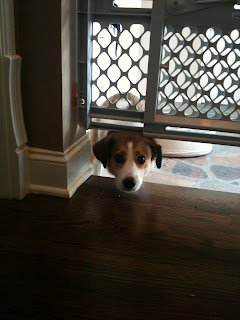 And let me tell you the thoughts that ran through my head last Tuesday, when we got another three inches of snow: 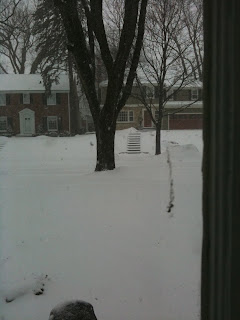 But my attempt has not been without its triumphs. This Saturday, when I caught myself flying into a fit of rage over my pre-pregnancy jeans that still won't button, I closed my mouth and re-joined the gym. Yesterday, on the phone with a friend, I caught myself before making a snide comment about so-and-so. Today I decided that I was going to embrace 37 degrees as warm, comparatively speaking.

That, women in your thirties, is progress. I think God would approve.
Posted by L. Shanna at 6:15 PM