A Woman in her Thirties Goes to Church

It's been three months since I've been to church, not counting the Christmas Eve Mass I went to with my Mom (I spent the entire service worrying about Anna and trying not to listen to other babies cry, lest I explode all over the congregation). I'm not a believer in a God that keeps track of how many times one goes to Sunday Mass in a lifetime, but let's just say my Catholic guilt was getting the better of me over the last few weeks. Today was the day to end the streak.

I've taken Anna lots of places with me, but church is different. People in church (especially Catholic church) are quiet. I had nightmares of Anna screaming in the middle of the homily or pooping loudly during the sign of peace. Sure, there's a cry room, but what if Anna is the cry-i-est baby there? And is it okay to breastfeed during Mass? I don't know-- they never told us the rule about that in Catholic school. But a woman in her thirties tries things, even when she's not sure of all the rules.

Here is a picture of Anna in her Sunday best: 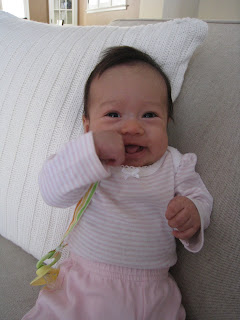 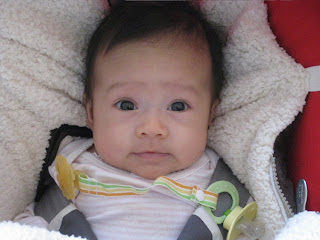 As it turned out, Anna was an angel (pun intended). She sat on my lap most of the time, fussed for about thirty seconds, and then began to nod off slowly.

Here she is, riveted: 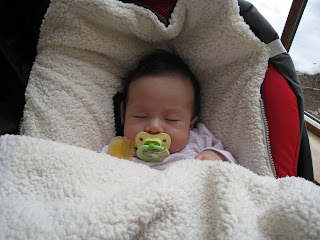 A woman in her thirties might have a dubious relationship with a higher power, but I will say this: Today, after church, Anna and I walked out to the most beautiful Pleasantville day in her entire three-month life: 46 Degrees!! Yes California, that is WARM AND BEAUTIFUL!

So we went on our first 'real' walk, because a woman in her thirties who was transplanted to the Arctic from sunny California does not take a nice day for granted.
Here we are, outside. I had to explain to Anna, 'That's the sun, Pumpkin. And fresh air. Isn't it just the most?' 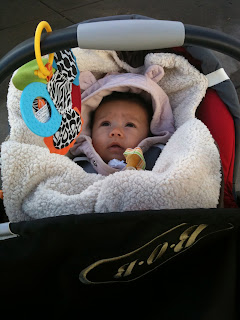 I don't know that there is a correlation between me getting to church and having weather nice enough to (finally!) walk in, but who knows? Maybe God saw my effort and was like, 'here you go, L.Shanna. Nice work.' A woman in her thirties will take her blessings, regardless. And we'll be in attendance next Sunday, just in case.
Posted by L. Shanna at 10:25 AM