A Woman in her Thirties Can Cook

I am not what anyone would call 'good' at cooking. Don't get me wrong-- I've come a long way since the Easy Mac of my twenties-- but while many of my friends have a repertoire of dishes and know when a dish needs a little more of this or a little less of that, I have a tendency to follow a recipe. Preferably one that includes the phrases 'one-pot' and 'twenty minutes or less'. Or I order pizza.

Unfortunately, I married a man whose mother is a great cook. No, that is not accurate. She is an amazing cook. She's so amazing that she can make this and this, and each is every bit as delicious as the pictures suggest.

So it's not surprising that L, having grown up on what is undoubtedly the best Chinese food in Pleasantville, often requests that I cook Asian food. This is intimidating on multiple levels, not just his Mom. There's also the fact that we lived in Asia for three years, and the single best thing about living in Beijing was the food. How could I possibly top anything on the menu at our favorite restaurant, Xiao Wang Fu?

I've had a couple Asian dishes up my sleeve, but those were getting repetitive. (Side note-- if you don't have the Asian cookbook from the Williams Sonoma 'Food Made Fast' series, get it.) Today I remembered that L's Mom had given me this book some time ago, and decided that a woman in her thirties tries old cookbooks in search of something new: 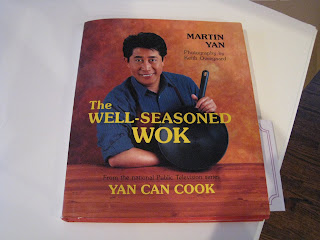 'You can do it', Martin Yan seems to be saying. 'A woman in her thirties can cook.'

I decided on a dish we used to get in Beijing all the time-- gong bao ji ding, otherwise known as 'General Chicken'. I know what all you women in your thirties are thinking: 'I get that at PF Chunks all the time-- how hard can it be?' Well, let me tell you. HARD. I've tried this dish several times, each an epic white-lady-trying-to-cook-Chinese failure.
But tonight, my gong bao ji ding came out looking like this... 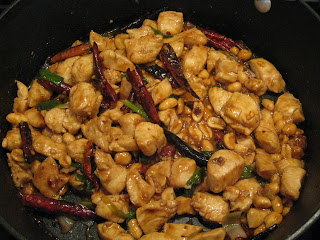 ... which isn't all that far off from what it looked like in BJ.

And it tasted good. Good enough to make again. Good enough for me to brush off some of my previous intimidation and think about trying something else from that cookbook later this week. I might not ever be the cook that my mother-in-law is, but a woman in her thirties tries. And when she tries, she can.
Posted by L. Shanna at 4:54 PM