A Woman in her Thirties Loves her Dog... Still

A few months ago, I wrote this post about how much I love my dog. I was eight months pregnant at the time, and more than a little emotional. Why, you ask? Because what I neglected to say in that post was that many people-- many people-- had told me that they, too, had loved their dogs.

'We gave our dog away when we had kids,' one neighbor said. 'We just didn't have time for him anymore.'

I never worried that we would give Dan away-- that was unthinkable. But I did worry about what he would think of the new baby, whether or not he would chew her toys, if he would bark at her while she slept... but mostly about poop. We don't have a fenced in yard here in Pleasantville, and the last year and a half has been spent walking Daniel-- sometimes four times a day-- to do his business. Walking Daniel at 5am was nothing short of a spiritual experience for me in the last year and a half (even in sub zero temps). Walking Daniel at 5am with a newborn... not so much. Especially in this weather: 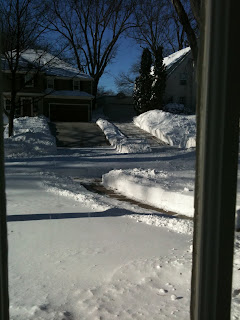 Now that L is back on his crazy traveling schedule, we needed to figure out something for Dan. Fast. Getting a fenced in yard is both expensive and time consuming, not to mention complicated in our neighborhood. Taking Dan to daycare every day that L is gone was considered, but the cost of doing that over the years would add up to a small fortune and would involve me getting Anna up every morning and taking her with me to drop him off and pick him up. Hardly optimal.

We have an itty-bitty-teeny backyard, but L got inventive in December. He dug out a small area and took Dan out there to do his business twice a day. At first, Dan was confused. Then, slowly, he began to pee out there on his own. But #2 was a little trickier. He just wouldn't go.

After weeks of trying, lots of treats, and lots of belly rubs, I'm pleased to report Dan has figured it out: 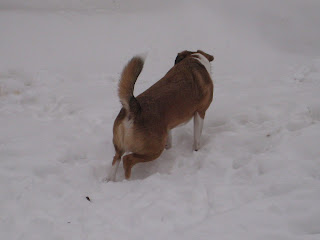 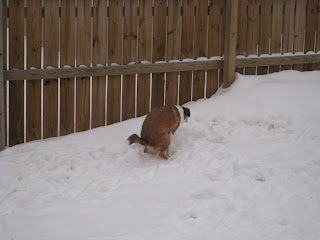 #2
And then he comes inside, tail wagging (notice blurry tail wagging), ready for a treat: 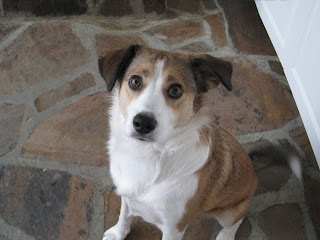 ...which I give him happily.

And while my dog's bowel movements are clearly cause for celebration, so is his relationship with Anna. He loves her, sniffs her and licks her, and hasn't taken a single one of her blankets or toys as his own. I have lots of pictures of them together, but this one is my favorite: 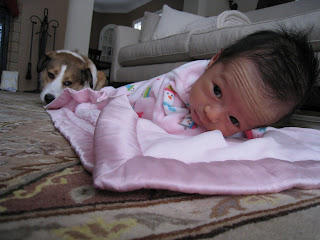 Anna, you lucky girl. Dan's got your back.

It took more than thirty years for me to understand that a pet is truly a part of a person's family, but I get it now more than ever. So Daniel, for pooping in the backyard, for licking your sister's fingers when she cries, for barking at the mailman every day just in case he forgets that this house is yours... thank you.

From the bottom of all three of our hearts.
Posted by L. Shanna at 8:49 AM