A Woman in her Thirties Brings her Own Baby

This week marked my first 'real life' week since Anna was born. And by 'real life', I mean I wasn't going to have my Mom, L, L's Mom, L's sister, or anyone else at my beck and call anymore. Stay-at-home mommyhood officially began.

Which explains the state of my hair... but that's another story.

I've learned a little something about myself in thirty-two years, and it's this: I don't like sitting around. I'm not good at it. TV is only fun in small, commercial-free snippets. I am a terrible napper, even when I'm sleep deprived. I can't even read for long periods at a time. I need to get up and move around. But that's hard with this little one constantly either on my boob, or searching for it: 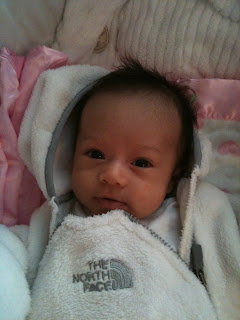 This week, my first adventure with Anna was to go to yoga. No, not the yoga I'd grown to love during pregnancy. It was BYOB (Bring Your Own Baby) yoga. It was supposed to be a chance to catch up with all the girls I'd been breathing and squatting with over the last few months and admire each other's babies, not to mention get a workout in myself.

Sounds great, right? It is great. Except when you factor in the following:

1. Sometimes Anna cries and I have no idea how to make her happy
2. I am terrible at breastfeeding in public (meaning I can't figure out the Bebe Au Lait thingy without flashing everyone around me)
3. Pee, Poop, et al

But I did it, because a woman in her thirties tries new things, even if they're scary.

Here's a picture of us on our way (it's cold outside, people!): 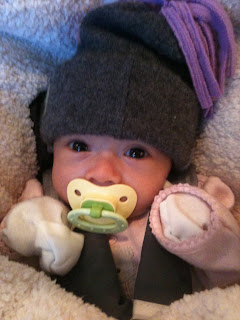 And here's a picture of Anna on her mat in front of me (a little difficult to get some action shots of the yoga itself, as it consisted of me swinging her through my legs and lifting her multiple times above my head-- maybe next time): 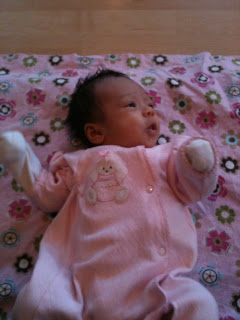 BYOB yoga hardly resulted in getting back into my pre-pregnancy jeans (um, Moms? When exactly is that going to happen?), but it was more than that for me. It was watching other Moms nurse in public without being embarrassed. It was sharing spit-up stories and frustrations with the cleaning of pump supplies. It was watching other women in their thirties with their babies and realizing they're figuring things out as they go, just like me.
Posted by L. Shanna at 6:35 AM