A Woman in her Thirties Considers the End

Guess who has two thumbs and is more than eight and a half months pregnant?
This woman in her thirties: 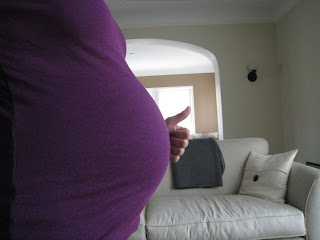 (Yes, I realize there is only one thumb visible in this photo. I have had this camera for three years and still have not figured out the self-timing feature. Don't judge me.)

It's all happened so fast, as things tend to do, and recently it's dawned on me that all this pregnancy business will be coming to an end rather soon. No, I will not spend this post highlighting the mental breakdown I had recently over the purchase of a Boppy. Instead I will do what a woman in her thirties with mild OCD does best: make lists.

Things I will miss about being pregnant:

1. People caring about how I feel

When I was about 10 years old, my orthodontist slipped when trying to adjust one of the spacers in my mouth and split the bottom of my tongue open. She split the bottom of my tongue open. During three years in China, I threw my neck out about four times, leaving me in such agonizing pain that I could not breathe without tears bursting into my eyes. A woman in her thirties has many examples of enduring through excruciating pain. And yet I can say without hesitation that no one has ever cared as much about how I feel than they have in the last eight months. Tired? Lay down and rest, sweetheart. Heartburn? Let me go out and get you some Tums. Emotional? It's going to be okay, honey, I promise. Being pregnant rules. I'm trying not to think about how, very soon, no one is going to give one you-know-what about my aching feet.

I always thought that a pregnant lady felt a baby kick a few times during her pregnancy. Either that's not true or I'm giving birth to the next Mary Lou Retton, because this little one is doing visible gymnastics in my womb about 20 hours of the day. How do I know it's visible? Because yesterday, while trying to lecture on Patchett's use of characterization in Bel Canto, one of my Seniors raised his hand and said, 'Um, Mrs. C? Your stomach is moving.' Creepy... but awesome.

Let's just say it's been a few months since I've been able to see... one of the parts the make me female. It's weird, this break we are taking. It's like we both know the other is there, but Chewy is standing in the way of the picture. It makes me feel very Athena-like. If it weren't for my giant boobs, I'd be Shiva his/herself. In other news, I've made acquaintance with the inside of my belly button for the first time in thirty two years.


Things I will not miss about being pregnant:

If pants don't have the word 'yoga' in front of them, I have no interest. This is a problem, because yoga pants are not ideal when trying to command respect from a classroom of high-schoolers. So I'm stuck with jeans, slacks, and other so-called comfortable maternity wear that I spend the majority of the day hiking up to my ribs in hopes that they don't fall down mid-lecture.

I think many of my internal organs, mostly my bladder and my diaphragm, will be pleased to see Chewy make her exit. In the time it takes me to hoist myself out of bed (four times a night) to get to the bathroom, I'm out of breath. Walking Daniel at a 90-year-old lady pace around the block also leaves me winded. Breathing really is such an under appreciated activity. I've missed it.

As a reader and wannabe writer, I am a lover of a good story. But in the last few months, all the stories I've heard have been of the 'horrible childbirth' variety. I have bitten my tongue through them because I figured they'd be ending soon, but have found recently that they are now being replaced by 'just wait until you have a colicky baby' stories. I'm kinda done with the stories about how hard this is going to be. I think this little one is, too: 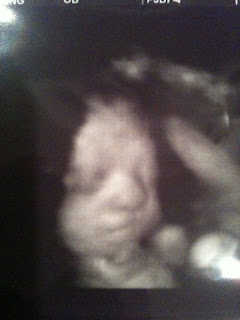