A Woman in her Thirties Reflects on Marriage 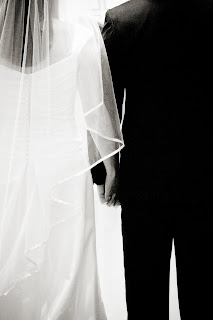 Today is my 2nd wedding anniversary. 'Well whoop-dee-do,' I can hear some of you out there saying. 'Two WHOLE years? I have shampoo in my shower older than that.' Fine-- I am hardly an authority on making marriage work. But a woman in her thirties knows a thing or two about a thing or two, so here's my thing. Or two.

In my twenties I worked at a bank to get my butt through college, and met a wonderful customer named Mr. T. (Many readers of this blog will remember him.) Mr. T was pretty much the kindest, most patient man in the world. Even after decades of marriage, he spoke about his wife as though they were teenagers who just met at the high school prom.

One day we tellers asked him the secret to a happy marriage. I was particularly interested in his response, as I was watching my own unhealthy relationship at the time crash and burn around me.

My first decade on this planet I don't think I knew of a single divorced couple. The only blended family I knew was The Brady Bunch. I thought marriage was one of those things that happened naturally for women, like growing boobs. Then my teens came, then my twenties, and with those two decades a realization that the Beaver Cleaver idea of marriage that I had in my youth was far from reality. I could wish it and hope for it, and I could judge the hell out of other people for the decisions they made in their relationships, but in the end no one owed me the life I saw on Growing Pains.

Damn you, Jason and Maggie Seaver.

While L and I have only been married two years, we've been together for almost eight. (Yes, I can still hear some of you groaning and moaning. 'Eight? I have jeans older than...') Regardless, I still think Mr. T's advice is the best I've heard. Marriage is 100% effort, on both people's part. Sometimes, some days, that's been easy to do. Sleeping-in-on-Saturday easy. But sometimes, and I'm sure I can speak for L when I say this, too, it's been hard. Really hard. Root-canal-while-watching-Jersey-Shore hard.

My point is that a woman in her thirties celebrates anniversaries. Not with gifts (though those are nice), and sometimes not even with physical presence (L is currently out of town on business). She celebrates them because she knows how wonderful and how difficult marriage can be. She celebrates them because, once a year, she and her partner can look at each other, and say, 'Phew. We made it one more year. Let's kiss real quick before we get to talking about replacing the water heater.'

Anniversaries are achievements, and we've achieved one more year. MP, L. Now about that honeymoon...
Posted by L. Shanna at 6:21 PM