A Woman in her Thirties Dogsits

I realize that some women in their twenties dogsit, but I was never one of those women. I reluctantly watched Carlos the Cat while K lived in Switzerland for a summer, but let's just say I'm pretty sure Carlos was unhappy with that deal. Pet-sitting is new territory for me. 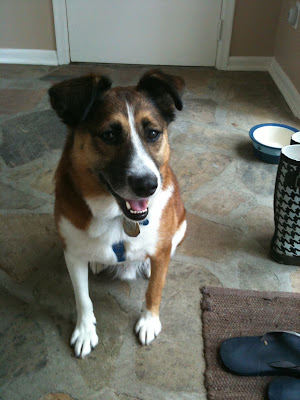 Walter is my friend K's dog, and he comes from the same shelter as Dan: 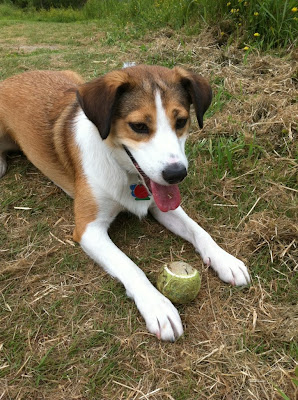 The resemblance is striking, no? The same furrowed brow, the same expressive ears... In my mathematically challenged brain, one Daniel plus another dog that may or may not be related to Daniel equals two Daniels. Right? Wrong.

The last couple of weeks have been eye opening for me. While Walter likes pooping on trees, Daniel prefers wide open spaces. Walter likes sleeping on the bed, Dan likes is own sleeping space. Walter is totally okay sharing attention, Dan not so much. Daniel loves other dogs, Walt has trust issues. Walter is perfectly content having little kids pet him all day, Daniel is a little leery of little people. It must have been how my Mom felt with two daughters so close in age-- how could they be so different?

The reality is that, despite the differences, it's been fun having two dogs around. I get all kinds of cute play pictures: 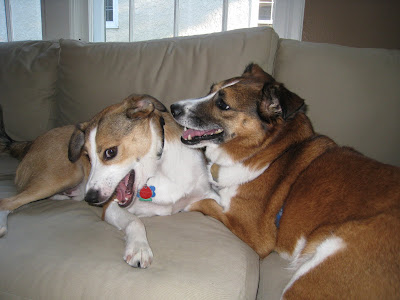 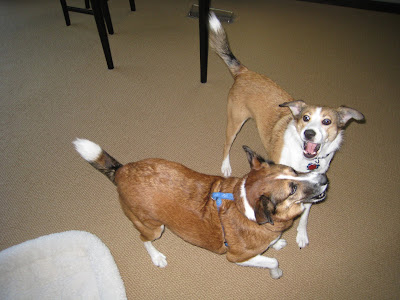 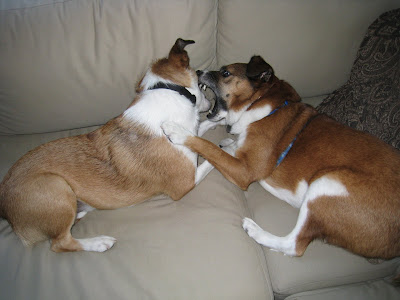 And dress up becomes more fun: 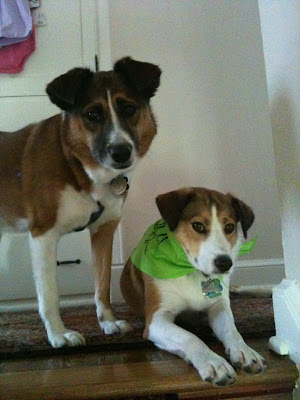 How great is that look on Daniel's face? He's like, 'Jeez, Mom, you're embarrassing me.'

So I guess when a woman in her thirties dogsits, it's kind of like life. One plus one still equals two, and while two doesn't necessarily means the same, two almost always means better.
Posted by L. Shanna at 9:00 AM 3 comments:

A Woman in her Thirties is a Sucker

Sometimes a woman in her thirties cannot keep her promises: 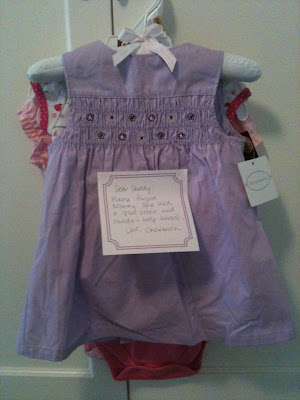 The post-it note in the middle says:

Please forgive Mommy. She had a store credit and couldn't help herself.

A Woman in her Thirties is a Goddess

It was right around the time of my recent mental breakdown that a neighbor recommended a place for prenatal yoga. She raved about it, in a very you'll-thank-me-later kind of way. A woman in her thirties that has now gained fifteen pounds and wakes up with cramped calves once a night takes good advice when she hears it.

I've stated my feelings about yoga and a few times in this blog, so I'll spare you the 'I'm leery of hippies' speech. Let's just say that during my first class, when my teacher said, 'The goddess in me honors the goddess in you' as we left, it was all I could do to keep my snort from becoming audible. Goddess-- she clearly hasn't seen my thighs lately.

But despite the 'let's begin class with three chanting Ohms....' and 'send a love note down to your babies in your downward facing dogs', I am completely hooked. I realized this morning that prenatal yoga is the great equalizer. Women who once might have dominated their spin classes sit on their mats massaging their cankles. Women who might have gotten judgemental looks in the locker room at the gym look sympathetically at the girls barely able to make it through class without puking. And we all have this wonderful excuse to tune into our bodies. Case in point-- the Miss Fitness USA-looking woman next to me today said, 'You know what? Squats are just not going to happen today.' And that's totally okay.

You'd think that a woman in her thirties who does yoga up to five times a week would be pretty awesome at it by now, but I have unfortunate news: I still completely suck. I sometimes sweat and breathe my way through my warrior series praying, 'Please God(dess), don't let my baby inherit my old lady back'. But I am starting to get what the yogies have been saying all this time about breath and life, about salutations and inward focus. It's helped in the past weeks when construction workers have been in and out of our home. It's helped when I started to create a baby registry and thought I was going to pass out thinking about all the stuff we are going to need for this child. It's helped when I wake up multiple times at night having nightmares about being a bad Mom.

I am a long way from seeing myself as a goddess, but I'll admit that prenatal yoga has been one of the best gifts I've given myself in a long time (that and TiVo). So with that, I am off to the dentist to put all these deep breathing practices to use. Namaste.
Posted by L. Shanna at 10:45 AM 3 comments:

A Woman in her Thirties Springs a Leak

This Wednesday I finally began feeling like I was actually beginning my teacher summer. School (for me) was finally over, and I was starting to feel like I could kick back, watch my tummy grow, and get to work on hanging some pictures in the house we moved into almost a year ago for crying out loud.

A woman in her thirties knows this is very, very bad. As in baaaaaad.

The plumber who charged double time for coming after hours told us the culprit was the toilet in the upstairs bathroom. He said things like, 'probably been leaking for a few weeks', and 'older home', lots of times. L and I only heard the sound of our savings account draining. And then he started talking about what it was going to take to fix it.

Instead of describing it, let me show you with a photo montage. When I am long dead and my iPhone pictures are being sold at auction, I think this will be referred to as my Blue Period. 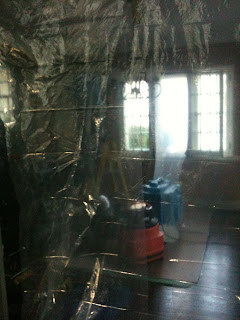 This beautiful image was captured during the sealing off process of our dining room. You will notice that a window is taken out to allow for the water that is being dried from our walls to evaporate elsewhere. The two large machines in the room have made it hot enough to roast marshmallows in there for the last three days. 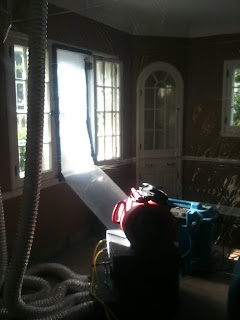 A woman in her thirties with more austere taste will appreciate this image, taken from the kitchen. In the upper left hand corner you will notice the three tubes hanging down, drilled through the ceiling, to dry out the walls. Doesn't the light coming from the window remind you of that scene in ET when he's about to.... oh, I don't remember. I saw ET when I was five and my Mom had to take us out of the theater because we were too scared. 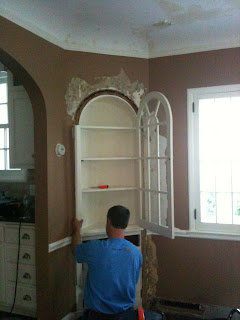 Oh, but this image is my favorite. This is Dave, our contractor, ripping apart the original pine cabinetry from the 1920's in the dining room, since the water had seeped behind the wall. It was so great when he kept saying things like, 'Wow, they don't make cabinets like this anymore', and 'whoever made these cabinets really put a lot of thought into them.'

Come to think of it, I think the water that came from the ceiling might have been actual tears.

A Woman in her Thirties Loves her New Pronoun

You know how people always talk about woman's intuition and motherly instincts? Shouldn't a woman in her thirties have perfected that by now?

I guess not, because last week if you would have asked me what I was having I would have said BOY. Without a doubt. This woman in her thirties is baking a boy. Keep in mind I had no science behind that, other than a heartbeat count and a few dreams. I always knew feelings were overrated.

Anyway, you can imagine my surprise when on Tuesday I lay down from my 20 week ultrasound and the doctor said the words 'unmistakable', 'textbook', and 'labia' (sorry) when referring to Chewy.

That's right. This is the perfect little spine: 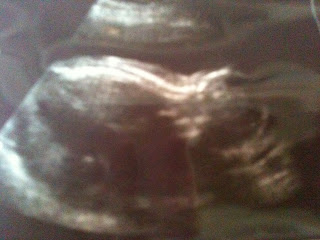 And this is the perfect little foot: 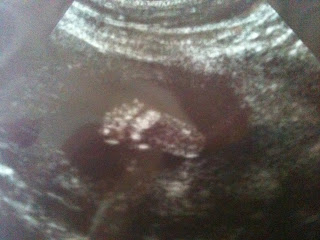 And this is the perfect little profile: 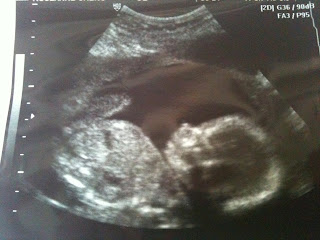 of my perfect little baby girl.
I spent about three seconds in shock until I looked over at L's face as he scrutinized the image of our twisting and turning little Chewy. It was more than the face of a man in love with his baby-- it was the face of a man completely enamored with his daughter. Oh, how I know that face.