A Woman in her Thirties is Prepared

When I first moved to Pleasantville, I was perplexed by the large yellow horns that seemed to dot the roads at various locations. I was told those were tornado sirens, and they scream loudly when it's time to get in the basement and bunker down, Wizard of Oz style. I put that in my repertoire of knowledge about the Midwest that I was going to choose to ignore, such as the actual definition of All-Wheel-Drive and why it is important to keep kitty litter in one's car in the winter. Whatever it is they say about ignorance, it's true.

Fast forward to Friday. It rained in the afternoon, and all during my summer school class my classmates were using their laptops to check the weather. 'Tornado threat,' one girl said. And I thought, 'You know what sounds awesome right now? A bean burrito.'

So I went about my business, bought groceries for the week, and came home Friday afternoon insisting on date night with L. 'Are you sure?' he asked. 'It's raining pretty hard.' I said, 'It's just a little rain! Chewy wants pizza!'

At that point, the tornado siren started blaring. (Daniel was not very happy about this, let me tell you.) It hit me that this was the proverbial 'real deal', and I stood at the stairs to our basement like a four-year-old, looking at L for directions about what to do. The rain and hail came down in large chunks, and we watched the wind whip the trees in our yard feeling completely helpless. Here are some pictures that don't do the situation any justice: 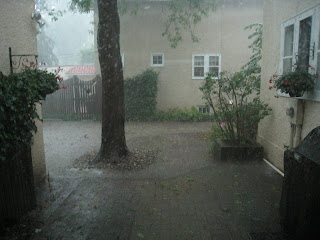 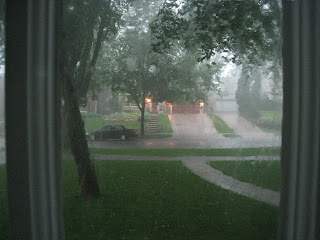 And then the power went out.

Boy scouts learn to be prepared at a young age. A look in my purse on any given night in my twenties would have revealed a woman who was prepared for anything. But now, in my thirties, as a homeowner, wife, and almost-mother, I found myself completely without resources. 1 small flashlight (L's), 20% battery life on my cell phone (no land line), two candles for the entire house but not a match between the two of us, and a fridge full of spoiling meat. Not good.

The tornado siren stopped after a few minutes, the rain and wind stopped blowing relentlessly, but the power stayed off. It remained off for almost 24 hours. L and I did our best to make light of the situation, at least at first, but in the back of my mind I knew it wasn't light-- it was stupid.

I reflected on this situation yesterday, as I painstakingly threw away the contents of our fridge. A woman in her thirties is prepared. Not for everything, of course, but for the obvious things. Especially now, with Chewy moving around inside of me. Lesson learned, people. I'm off to buy some batteries.
Posted by L. Shanna at 7:20 AM