A Woman in her Thirties is Allowed a Breakdown

I have been struggling with how to begin this post. Every time I begin, I hear the voices of women in their thirties (and twenties, and forties) gagging and sighing in disgust. There is nothing more annoying than a woman in her thirties who has never really struggled with weight to complain about putting on a few during pregnancy, right? To you who know me in the physical sense, commence eye-rolling now. I will take it like a woman.

The reality is this: my clothes don't fit. Like at all. My tops, my jeans, my capris. None of them. I have spent the last few weeks shoving myself into my old clothes, convinced my Bella Band would be enough, but the truth is that it's not. I have put on 10 pounds so far, and no, that is not earth-shattering, but 10 pounds on 5'2 is more than 10 pounds on 5'9. Especially when eight of those ten pounds is in one's boobs and the other two is in one's butt.

Last Sunday I decided to do some cleaning. I was going to organize my clothes into three piles:

1. Donate
2. Can't wear now, but will wear after the arrival of Chewy
3. Can still wear.

Sound strategy, right? Except this is what I came up with: 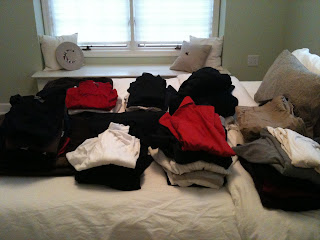 1. I might still squeeze into these for another month
2. What was I thinking?
3. With the right tailoring...
4. Yeah, I'll never wear these again
5. It depends on how far my hips spread
6. It depends on how desperate I am
7. Do pregnant women wear button downs?
8. I will never need to look this cute again

You see where I'm going with this.

What does a woman in her thirties do when faced with this dilemma? I have no flipping idea. So I did the only thing I could think to do: I cried.
L found me with my head in my hands, bawling like a big fat baby. 'But you're pregnant,' he said, which is true. 'But that's not the point,' I wailed. I had no idea what the point was. All I felt in that moment was that my life as I'd always known it was over, my body was no longer mine, and it would never look the same again. And for a woman in her thirties who has always thought of herself as not caught up in physical appearances, that realization was brutal.

I did two things this week that made me feel better. One-- I went to prenatal yoga. I loved every minute of it, even the endless downward dogs. I will blog about this later ('Send looooove to your baby....'). And two-- I bought five maternity shirts at a second hand store down the road. I have no idea why I waited this long to be comfortable. So--phew-- life is back to good.

I always thought that a woman who laments her pregnancy isn't ready for motherhood. How can you be sad about the loss of your youth (or at least the feeling of your youth) and overjoyed with the miracle of life at the same time? But I know now that this, just like all things, is not quite so simple. A woman in her thirties can break down and be fulfilled, all at the same time.
Posted by L. Shanna at 4:09 PM