A Woman in her Thirties Bakes Cakes

While the feminist in me cringes at the title of this post, allow me to clarify: I am not talking about the June Cleaver baking a cake in high heels while waiting for Ward and the boys to get home kind of baking cakes. I'm talking about the hey it's the love of my life's birthday and since we're not really birthday people and we really like coconut let's give it a try kind of baking cakes.

Here is the cake in question, courtesy of none other than the Barefoot Contessa herself. I will be honest and say that the woman in her twenties that couldn't make rice that I used to be would never have considered buying this cookbook. But H got it for my wedding shower, and it has saved me many a dinner. If there's one thing I now know, it's that Ina didn't buy her fabulous house in the Hamptons with sloppy lasagna. 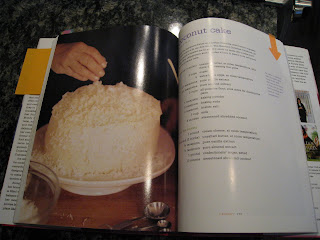 You will notice there is a long list of ingredients on the right hand side. Again, in my twenties I would have shuddered at the thought of buying all that stuff when there are perfectly good already made cakes in my local grocery store. But I promised L I would give this cake a shot for his birthday and bought what was necessary. Here are some of the highlights (and yes, all FIVE sticks of butter were necessary): 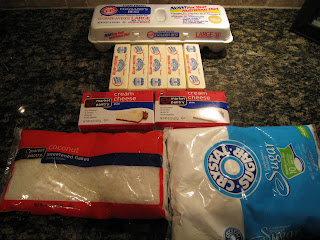 The sifting, mixing, and blending were stressful processes. Ina's directions were so precise, and the book I'm reading now said something like, 'baking is the most unforgiving type of cooking'. So I measured carefully and agonized over just how much grease Ina means when she says, 'grease and flour generously.' Is this generous? 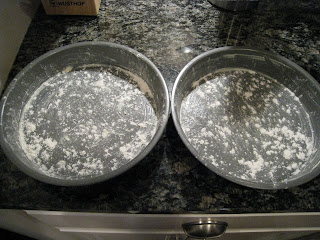 I waited nervously for the cake to finish baking in my oven while wondering if there is a patron saint for making cake come out of the pan in one piece. When it did, I got to work on making the frosting. I am pleased to report that the final product looked like this: 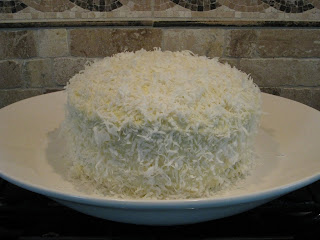 Not too shabby, if I do say so myself. I watched happily as L licked the frosting from the bottom of the mixing bowl and thought I had truly crossed a threshold in woman in her thirties-hood.

We cut into the cake on Saturday night, and while we were with a group of very kind friends who would never tell me otherwise, I think it was a hit. I will say that it tasted good to me, but that is not saying much since right how Taco Bell tastes like a Paris bistro. 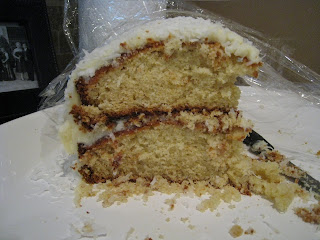 I'm so darned proud of myself over this accomplishment that I have reassessed this whole idea that baking cakes is somehow equivalent to kowtowing to 'the man'. I think life is much simpler than I've made it; even simpler than Ina's step-by-step directions:

A woman in her thirties bakes cakes if she wants to.
Posted by L. Shanna at 5:30 PM