A Woman in her Thirties is on Fire

Wednesday, while elicipticalling, I heard on the news that a house had blown up in Pleasantville.

That's weird, I thought. That's where I live. Oh well.

But I kept elipticizing.
I tuned in to another station and they showed the area of Pleasantville where the house had blown up.

I slowed down my elipticalation.
I tuned in to another station and they showed the cross streets where the explosion happened.

Holy crap, I said out loud. That's down the street from my house!

I stopped elipting.
How does a house blow up, you may ask? The answer involves a little too much knowledge of the piping under one's house for me to answer. All I know is gas leak+cutting wrong wires under home=explosion. 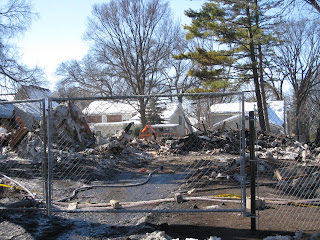 There are a million 'thankfullys' in this story. Thankfully no one was home and/or hurt. Thankfully the dog managed to get out in time. Thankfully homeowners are made to pay through the nose for insurance. Those kinds of things.

So while the helicopters chop-chop-chopped over my head that night while falling asleep, my mind started to wander. And I ended up feeling just a little bit jealous.

Jealous, you say? Hear me out:

L and I are not collectors of things. In the last seven months we have acquired the most 'stuff' we've ever had, and our house remains mostly empty. But we still have lots and lots of things. Stuff. Stuff that needs to be cleaned, dusted, stuff that is constantly being compared to stuff in other catalogs, stuff that goes on top of stuff and beside stuff. Stuff. Stuff and Things. There is part of me that is intrigued by the idea of starting completely over, rebuilding our home with insurance money, hiring someone to purchase things to go into that brand new home (because God knows I hate shopping for it myself), and starting over with a clean slate.

Is this a woman in her thirties thing, or a spring cleaning thing? I'm not sure. What I am sure of is that no one seems to agree with me. The standard responses to my feelings have been:

What about the pictures?!
Insurance wouldn't cover everything!
Imagine living out of a hotel with nothing while your house was being rebuilt!
And it's, true, all of these responses. A woman in her thirties is too old to get all Chris McCandless on people and think that she doesn't need 'stuff' in her life to make her happy. My pictures are priceless. I'm sure hassling with insurance over something this catastrophic would end in a head full of gray hair for me. And living out of a hotel would not be good for Daniel. I know all of this.