A Woman in her Thirties is Ready

A vicious rumor began about me when I was in my early twenties: that I hate animals. The story told about me is not untrue-- that I left a bowl of milk in the laundry room at my apartment for an abandoned kitten that I refused to take in. However, the detail about K's cat Carlos, who lived with us at the time, almost scratching this poor kitten's face off is often omitted from the telling. (Thanks, M).

The truth is that while I have memories of wanting a dog when I was a kid, once I was eighteen and on my own I was not ready for the commitment I know that an animal is. I lived with animals, begrudgingly, in my twenties. It always felt mean to me that they would know to run and hide when the keg was being rolled in from someone's car to our bathtub. And then there's the shedding. I had all I could do to control my own shedding, let alone that of another animal. In my selfish twenties, an animal did not fit anywhere in the picture.

In China, L and I played around with the idea of getting a dog. L has always wanted one, and we talked about it seriously, but again, life kept getting in the way. What was the point of getting a dog when we were never home? When we lived on the twelfth floor of a gigantic high rise? When we knew we'd eventually have to find a way to get it back to the US anyway?

With the events of the last year and our recent 'settling down' in Pleasantville, L and I came to a realization: we were finally ready for a dog. While both of us were happy that it was time, we both approached it with extreme caution, as we both often do when considering major decisions (one of us more than the other).

Fortunately, the gods were smiling upon us over the last few weeks, and yesterday we got this little guy. Daniel is (and I have absolutely zero experience to quantify this, keep in mind) the best dog that ever existed on the planet. We adopted him from a wonderful local organization that thinks he's some sort of Collie/Beagle mix, and about a year old. Last night, he slept all night in his bed. He loves treats, is already housebroken, and is always open for a belly rub. Today when I went out for an hour, I felt the sting in my heart when I was without him that is often associated with a woman who's fallen in love. 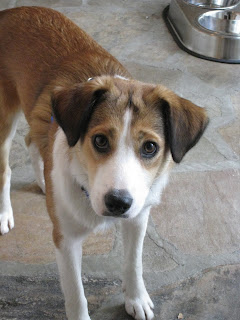 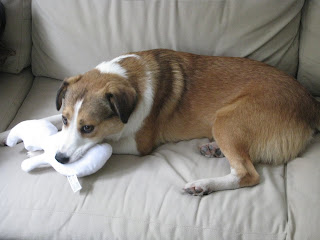 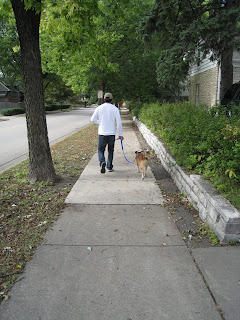