A Woman in her Thirties is Kreativ 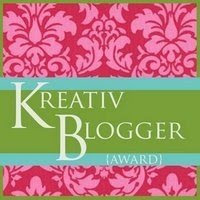 Thank you, Teegie, for the bloggie shout out! You know when a woman in her thirties is called 'Kreativ' by someone who does this (and enjoys it!), then you're doing something right. I'm copying and pasting the directions from her blog, so as not to miss out on anything important:

1. Thank the person who nominated you for this award. Xie Xie, Teegie!

2. Copy the logo and place it on your blog. It took a few awkward messages to brother bear, but I finally figured out how to do that.

3. Link to the person who nominated you for this award. I've only got two of her blogs linked to mine, but the last I checked there are about a dozen more. Keep searching.

4. Name 7 things about yourself that people may not know.

Why Seven? A woman in her thirites is inquisitive. Okay, here goes:
5. Nominate Kreativ Bloggers.

Foodie is the New Forty (for the tummy)
Shadowplay (for the mind)
The Adventures of ALS Boy (for the soul)
6. Post links to the blogs you nominate.

Um... didn't I just do that?
7. Leave a comment on each of the blogs letting them know they’ve been nominated.

A woman in her thirties is off to commenting.
Posted by L. Shanna at 4:51 PM